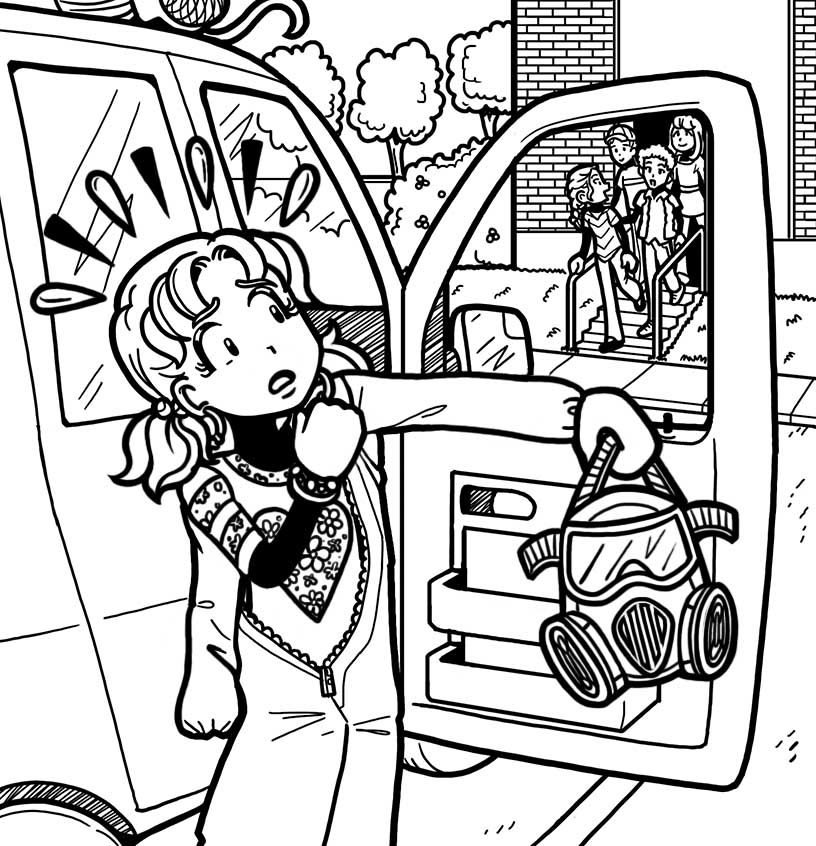 I totally BUGGED OUT today!!

(And it wasn’t even Brianna’s fault!)

The morning started well since it was a Saturday. My mom took Brianna to a play date with a friend from her ballet class, and I thought I had the whole house to MYSELF for a while!

Then my dad came home. That was okay, though, because he was super excited about a gift we wanted to get. My mom’s birthday was coming up and he had found this grandfather clock just like the one that was in Mom’s house when she was growing up. But, he needed to pick it up from this little old lady’s house and he knew she wouldn’t be able to help him load it into the roach mobile. (And it HAD to be the roach mobile because it wouldn’t fit in the regular car, and anyway, Mom had taken the regular car.)

Anyway, I was happy for Dad so I agreed to ride in the roach-mobile! Voluntarily!! I mean, I hate it and everything. But she IS my mom, and I was in a good mood. No one was going to see me driving to some old lady’s house the next town over.

Just in case, I decided to hide chill-out in the back seat while I listened to music. If I closed my eyes, I could even pretend I was in a normal car. When the van stopped moving, it didn’t seem like we had driven far enough. Dad started to get out so I sat up.

And you will NOT believe where we were!

I couldn’t believe it! Had my dad somehow made up the whole grandfather clock story JUST to trick me into going to school in the roach mobile? I mean, at least there weren’t students on campus, but STILL!!

He walked around and opened the doors to the back of the van.

“Oh good,” he said, “You’re awake. Come out here and help me. There’s a pest emergency!”
He said that with the sort of excitement Brianna might use to say, “There’s Princess Sugar Plum walking down the street!”

Apparently he didn’t make up the clock thing, but he did get a phone call about this pest emergency. So, we were stopping on the way. And get this: he wanted ME to HELP!

“Dad, if this is such a BIG emergency, shouldn’t you be working with another professional?!” I whined.

“Yes,” he said, putting on his gigantic, crazy suit in the middle of the parking lot, “but Steve’s out of town!”

Steve’s the other exterminator he calls when he has a job that’s too big for one person. I shuddered to think what that could even mean. Man-sized rats? Floor-to-ceiling creepy-crawlies?

“I mostly need you to show me where the boy’s locker room is,” he replied. “But put on a suit just in case.”

I was totally about to pitch a fit about child labor laws and being scarred for life by such unfair treatment, but then in the distance I saw kids coming out of the theater. There was no school today but the theater kids must have had play practice!

“Nikki, come on,” my dad insisted. “Unless I want to lose my contract with the school, we need to hurry up. I’ve got to deal with this infestation now, so the chemicals have time to clear before the locker rooms get used on Monday.”

The theater kids were getting closer. I never thought I’d say this in my life, but suddenly, putting on one of my dad’s extermination suits seemed like a really good idea.

“That’s the spirit!” my dad said with a smile as I hurried into it. “You’re a natural!”

Once I had it on, my head was covered, like a beekeeper, or one of those awful scientists trying to kidnap ET. No one had to know I wasn’t Steve. (if Steve was the size of a 14-year-old girl. Which he’s definitely not!)

“Great, you carry these”—my dad shoved some giant, heavy canisters in my hands—“and show me to the boys’ locker room!”

I was NOT going to fight giant rats, or whatever the emergency was but I couldn’t just stand there in the middle of the parking lot, wearing a ridiculous looking extermination suit. So I decided to do what any rational person wearing a silly suit would do – go inside the building where no other kids were hanging around and show my dad to the locker room.

I pretended to be Steve and lugged the canisters into the building. I was hot and sweaty by the time we reached the gym. And let me tell you, the inside of that suit smelled as bad as the boys’ locker room probably did. NOT that I was going to go inside and find out!

Where I usually turn right to reach the girls’ locker room, I forked left and found the door.   “Here!”   I set the canisters down and was about to collapse from exhaustion on the ground. But my dad grabbed my arm, and said, “Great! Let’s go!”

Then, before my tired feet could react, he pushed open the door and pulled me inside—
INSIDE A SWARM OF FLYING COCKROACHES!!!!!!

EWWWW!!! I have to take another shower, just thinking about that again. I’ll finish explaining what happened soon, but for now, I’ll just say this: I am NEVER putting on one of my dad’s exterminator suits EVER AGAIN!!!