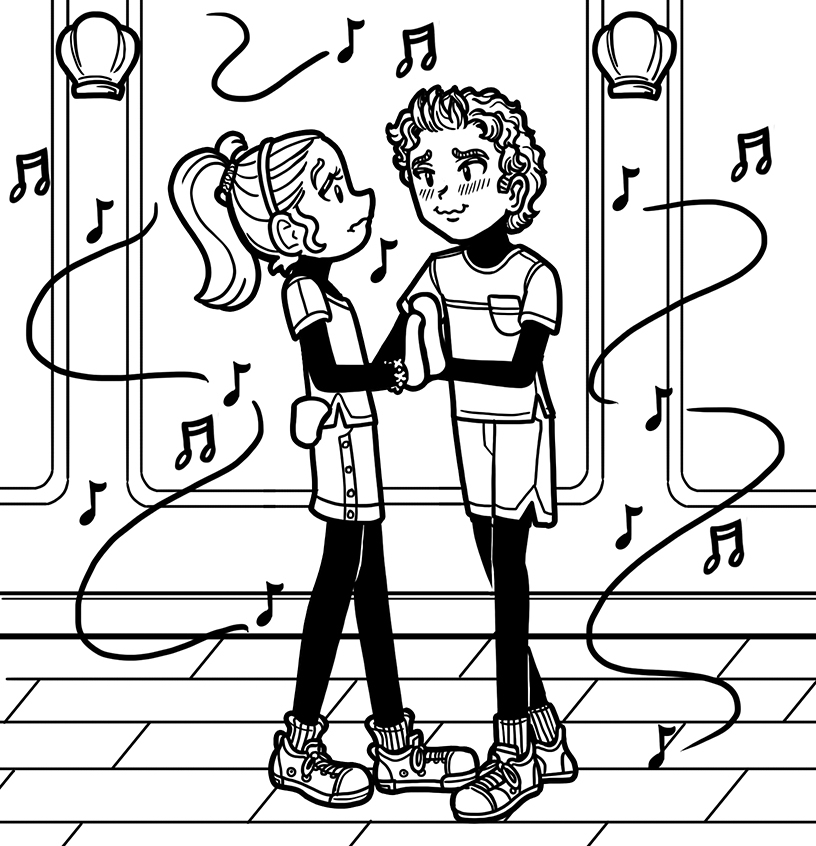 I’m in fifth grade and all the fifth grade classes are required to do dance. Problem is, last week our dance teacher said that we’d be partnered up boy-girl on Monday. But then someone said that the GUYS get to pick their partners. I don’t know if this rumor is true, but I’m totally DREADING Monday. Because there’s this guy in my class who, I think, likes me (according to how he stares at me whenever he gets the chance), but I don’t feel the same. And yes, this is DANCE, but all my friends are stressing out. The boys even have to DIP us!
What should I do, or what should I NOT do?

Okay, hang on one hot little second. I’m going to try to address all your concerns, but first of all, I want to point out two very important phrases in your letter. Pay careful attention.

First up, very important, here it is:

“Our dance teacher said that we’d be partnered up boy-girl on Monday.”

“But then someone said that the GUYS get to pick their partners.”
And then the rest of your letter is mostly about concerns related to the guys picking the partners. But that’s just a rumor!! Started by “someone!!!” You don’t even know who said it!!!  What you DO know is that your TEACHER said you’d “be partnered up.” To me, that very clearly means the teacher will do the partnering.
Here’s the thing – teachers are no fools. They know what sort of chaos would be created by letting the guys do the picking. No fifth grade teacher wants to deal with that degree of crazy in her classroom.

So the moral of this story is, DON’T LISTEN TO “SOMEONE’S” RUMORS!!!

But there are other things going on in your letter that I also want to talk about.

Whether your teacher makes the assignments or not, you might still be worried about what will happen if a certain someone picks you. I get that. I guess I’d just encourage you to imagine how you’d feel if the tables were turned.

WHAT IF the girls got to pick their partners and there was a super cute guy you’d been crushing on FOREVER and you got up the nerve to pick him as your dance partner? That would take a LOT of guts, right??? But WHAT IF that super cute guy didn’t like you back? He might get super self-conscious and want to make sure everyone else knows that he doesn’t like you, so he might be rude and jerky about the whole thing, which would make everyone feel awful.

OR he might decide to just be nice about it. That would be nice, huh?

So, if you think about it from his perspective, the best thing to do if you get paired with that guy is just be nice. It’s not like you’re agreeing to go on a date with him—it’s a school assignment, like being assigned to do a book report together. It’s not quite the same since you’ll be touching each other, and there’s something sort of traditionally romantic about dancing together. But, I can guarantee you there will be nothing romantic about this. EVERYONE is going to be self-conscious and EVERYONE is going to have to do it whether they like it or not. And you’re going to feel awkward and silly and maybe, if you’re lucky, you’ll actually have fun, and then it’s going to be over.

So, here’s my advice summed up:

I hope that helps, and I hope you actually have some fun! Look at it this way: dancing has got to be better than dodgeball!!

Has anyone else ever been stuck with a dancing partner you didn’t like? How would you handle that?

Hang Out With Brandon!