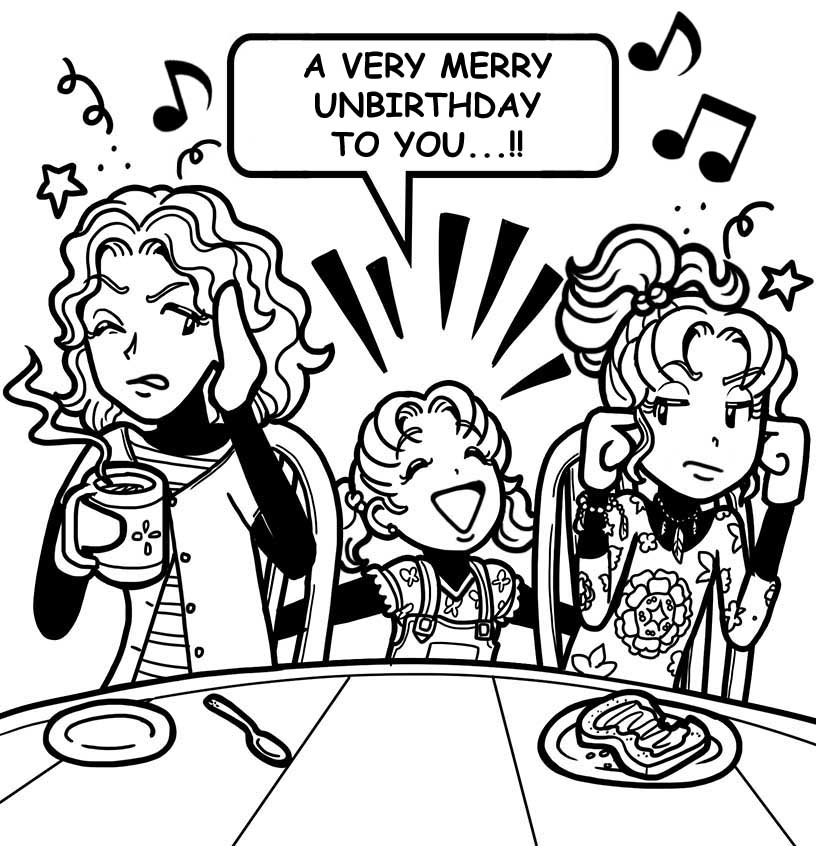 Don’t mind me, just hiding from a pack of six-year-olds.

Figuring out how I might disguise myself and escape this house?

It all started when Brianna watched the old animated Disney version of Alice in Wonderland. I tried to warn her not to. That creepy cat gave me nightmares for years.

But Brianna didn’t care about the cat. NOPE, she’s fixated on the Unbirthday Song. She played it over and over. Sung it at the dinner table. On the toilet. In her sleep.

“A VERY MERRY UNBIRTHDAY TO YOU! TO ME? TO YOU!”

I seriously considered lugging the TV up to the roof and dropping it off.

My mom apparently felt the same way, because she made a deal with Brianna: if she would STOP SINGING THAT SONG, Mom would throw her an unbirthday party of her very own!!
SO UNFAIR, right?? Brianna annoys her way into a PARTY???

My mom tried to tell me it wasn’t really a party. There wouldn’t be a cake or presents. It would really just be a playdate with a bunch of kids.

But there are balloons and streamers and cupcakes (which are TINY CAKES, MOM!!!!).

Mom tried to bribe me into helping with the party (which wasn’t a party…except it totally was). And okay…it worked. She offered to let me go to this big hip hop music festival that Zoey’s dad has backstage passes to, but my mom had said no way, I was too young.

So I hung in there as long as I could. I filled up water guns, I poured punch, I cleaned up spilled punch, I showed kids to the bathroom, I ran the music. I was EARNING that music festival.

But then Brianna wanted me to play The Unbirthday Song. But the WHOLE POINT of the party was that I would never have to hear that song again!

I mean, I got it. On principle. But also? The whole party was because she’d agreed NOT to sing the song anymore!!

It was maybe not the wisest choice I could have made.

Brianna might look all sweet and innocent to outsiders, but she’s kind of an evil genius.

She told all her little friends that I was hiding a HUGE stash of candy somewhere in the house, and if they followed me everywhere I went and asked for clues, I would lead them to it.

I didn’t know WHAT she’d said. I just knew that suddenly they were all following me around and saying things like, “Where’s the candy?” “Hot or cold?” “Upstairs or downtairs?” “If you tell me, I’ll be your best friend!”

Excuse me, but I already HAVE two BFFs and they do NOT bug me for candy all day!!!

When I FINALLY figured out what was happening, I told everyone we were going out in the backyard to play tag. I thought this would distract them! They would have to run away from whoever was it! They would forget about ME!

But remember how I said Brianna is an evil genius?

She started handing out the water guns and telling everyone that whoever hit me the MOST times would get the candy! It made ZERO sense! If I was the keeper of the candy, why would I give it to people spraying me?!

But newsflash: six-year-olds don’t care a whole lot about what makes sense! If someone gives them a water gun and says, “GET HER!” they just start shooting!

I finally made it inside, where my mom started yelling at me about running through the house dripping wet, but then she got distracted by all the kids trying to follow me inside with water guns. That gave me enough time to lock myself in my room.

So here I am and here I’ll stay until every single maniac six-year-old has left this house! Except Brianna. I guess I’m stuck with her.

And if my mom tries to say I can’t go the music festival because I didn’t help for the whole party, you know what I’m going to do?

I mean, hey, it worked for Brianna, right???