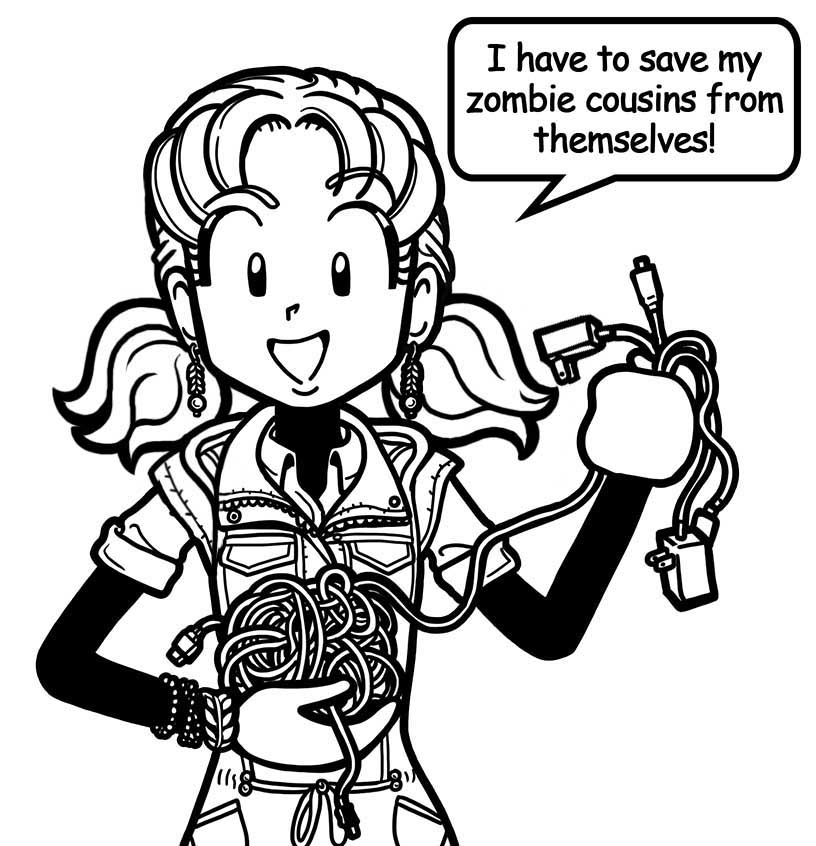 I was TOTALLY prepared for the arrival of my crazy Maxwell cousins. I’d hidden my valuables. Chloe and Zoey were on standby to brainstorm escape routes via text. Brandon even said I could come volunteer at Fuzzy Friends if things got too crazy around here!
When their van pulled up, I got super sweaty. Was I REALLY ready? Could I handle another WEEK of Maxwell cousin madness??? What would they destroy?? Would the house still be standing when they left?

MOST horrifying thought: Would Brianna learn NEW ways to make my life miserable????

Aunt Janet got out of the van. She stretched, came up the walk, and hugged my dad. But, my cousins stayed in the car.

Then, my dad asked about the kids and Aunt Janet waved her hand like she barely remembered she had kids. “Oh…they’re still in the car.”

They eventually came into the house, but it was the WEIRDEST THING. It was like the Maxwell cousins had been body snatched!! Like alien pod people had come down in the night and beamed them up to their planet (good luck, alien planet!!!) and then aliens had taken over the Maxwell cousin bodies!

And those aliens didn’t seem to be able to do anything except stare at screens!!!  One by one, they shuffled out of the car and into the house, eyes glued to screens. Inside, they each found a corner and sat. QUIETLY!!!!

I did not know WHAT was going on!!

Sophia, who’s 12, was listening to music while doing stuff on her phone. When I tried to say hi, she acted like she didn’t hear me!! Which…she probably didn’t!

Ethan and Luke, 9 and 7, were both playing games on tablets. But not, like, against each other. Each in their own world. QUIET!!!  I really can’t explain how quiet they all were!!! It was FREAKING ME OUT!!!

Finally, Sam and Sam, the four-year-old twins, were sharing a tablet and watching some cartoon. When Brianna asked if she could watch, they took the headphones out and let her. But she got bored of hunching over a little screen after a while.

“What’s wrong with them, Nikki?” she asked me.

“I don’t know.”  At first, it was freaky, sure. But I wasn’t complaining. Maybe I could act like they weren’t here at all!

But after a couple days I could see that was NOT going to work. Because they WERE here. They were EVERYWHERE I wanted to sit. There was NO hot water. And, my favorite cereal was always gone by the time I got up.

WORST of all, Brianna had gotten used to hunching over the little screen with Sam and Sam, so SHE had turned into a screen alien too!! It wasn’t that I WANTED her to bug me. But she was FREAKING me out!!!

So I took DRASTIC ACTION.

While they were all screen-staring, I crept around and dug through their backpacks and suitcases. I’m not exactly PROUD of this, but I did feel kind of like a secret agent. I found each of their charger cords, put them all in a bag, and put the bag in the glove compartment of their van.

The twins were the first to lose power. When their mom couldn’t find the cord for them, the screaming began. I considered being the hero who discovered all the cords. Together. In the van.   It would have been pretty hard to explain.

When Ethan couldn’t find his charger, he decided he was going to invent his own, using whatever he could find. This included pipe cleaners, aluminum foil, candy bar wrappers, and string. This was entertaining, until I realized he was planning to stick the pipe cleaners into the electric socket. I convinced him to make it a solar-powered charger, so he took that project outside.

Luke’s response to losing power AND his charger was to go full King Kong all over the living room, knocking pillows to the ground, tipping over the coffee table, kicking the couch, etc. The upside of this was that Sam & Sam stopped screaming and joined in the destruction.

Brianna and I ran around making sure breakable things didn’t get knocked off of shelves. It was stressful, but hey! At least something was HAPPENING.

Sophia was the last to run out of power. She narrowed her heavily lined eyes at me. “It’s kind of suspicious that NONE of us can find our chargers,” she said.

And then I threw a pillow at her head.

Yes, I feel a little guilty about what I did. But, I like my loud and crazy cousins better than my quiet zombie cousins!

What would you have done to save your zombie cousins?