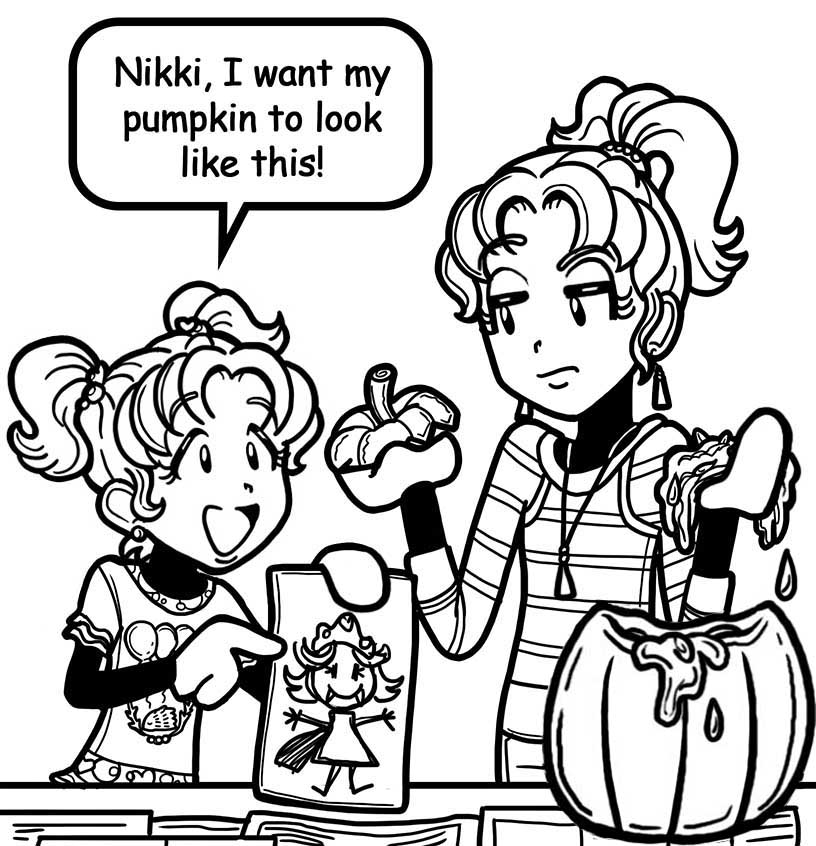 OMG, little sisters are SO annoying!!!!

Brianna has been YAPPING about carving pumpkins ever since the leaves started changing colors.

Ugh!! Lately, my mom has been nagging me about going to the pumpkin patch. But I am SO over getting covered in mud from head to toe hunting for a pumpkin that I could just buy at the grocery store!!!

So, when Mom and Brianna came home from the grocery store today with two giant pumpkins, I was relieved. No more sloshing through pumpkin patch 🙂 !!!

But THEN!!! My mom says, all innocent, like this is no big deal, “Nikki, would you help Brianna carve these? She wants to do a Princess Sugar Plum theme.” And then she walked out of the kitchen, like she’d just asked me to set the table.

Okay, hacking up a giant gourd and pulling out all the slimy guts is NOT art!!!

She held up her There-Will-Be-No-Discussion hand. “Nikki, I have to go run some important errands. So, please be a responsible young adult and help your little sister carve her pumpkin.”

I stomped back into the kitchen, where Brianna was sitting on the floor, talking to the pumpkins.

“It won’t hurt,” she said, waving a large knife at them. “You’ll barely feel a thing!”

Thankfully, she did. I sent her to draw a picture of what she wanted the pumpkins to look like, while I started carving a large circle around the stems of the pumpkins.

Seriously, what SICKO came up with the idea of cutting up a giant orange squash, pulling out the disgusting mess inside, and then making the whole thing look like a decapitated head that’s on fire???

She shoved her designs in my face. They looked like something from one of those “adult coloring books” my mom does!!! There were a MILLION tiny details I could definitely NOT do with a kitchen knife.

For a second I was flattered by her confidence in my abilities…but only for a second.

“Okay, you are going to have to simplify your drawings. A LOT!” I said.

“But I want the pumpkin to look like my drawing!!!” she wailed.

I shut out her wails and finished gutting the first pumpkin.

Finally, I was done. “Look Brianna, if you want me to draw you a really detailed picture of Princess Sugar Plum as a vampire and a zombie, I can do that. But cutting through a pumpkin is different. It’s like…”  I scanned the kitchen for ideas. And then I got it!  “Look.” I grabbed a cookie sheet and a bag of rice. I filled the cookie sheet with rice, then I made a B with my finger in the sheet of rice.

“Of course not.” I smoothed out the rice again. “But if you can draw it in the rice with your finger, I can carve it into the pumpkin.”

I thought she might burst into tears again, but then she got straight to work. While she played in the rice, I gutted the other pumpkin. It was actually kind of satisfying when they were both cleared out and ready to go.

AND, it was kind of satisfying when I managed to make Vampire Princess Sugarplum look EXACTLY like Brianna’s drawing. (A little better, actually.)

But you know what was NOT satisfying? When my mom came in, saw the finished pumpkins, and said, “You SEE?? I knew you could do it, Nikki! From now on, you’ll be the official Maxwell family pumpkin carver!!”

Will you be carving a pumpkin this year? What will your pumpkin look like? :pumpkin: