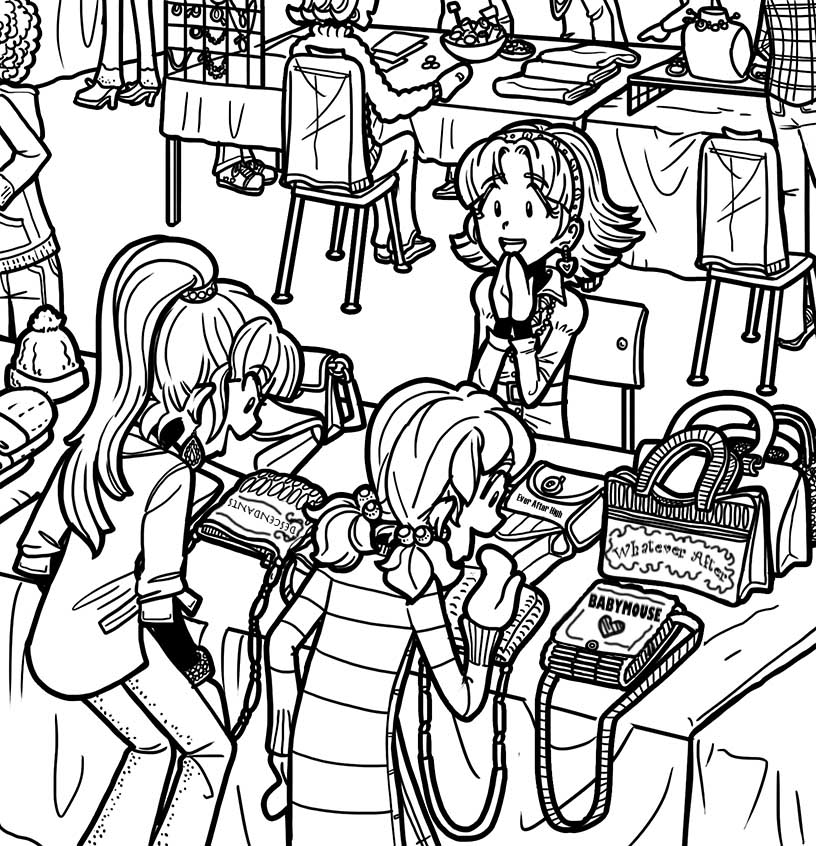 Today Zoey, Chloe, and I were helping Zoey’s mom at this holiday craft fair thingy she does. Zoey’s mom is this high-powered lawyer, always wearing a suit and talking on the phone about filing deadlines and case loads. So, I kind of didn’t expect her to be crafty. But I was WRONG.

When we first got to the community center and found Mrs. Franklin’s assigned table, she told us to start unpacking a huge plastic bin while she went back to the car for more.

I hadn’t even asked what her craft was when Zoey invited me to help. I guess I assumed it was jewelry, candles or baby blankets. I saw a lot of those things getting set up on the tables around us.

But no! When we opened the bin, it looked like a bunch of books. Then Zoey pulled one out – Whatever After – and showed us that it was actually a handbag! She’d taken the actual book covers and done craft magic to make them into bags! I was SO impressed!

By the time we were all set up, it was starting to get busy. REALLY busy. I could see why Mrs. Franklin wanted our help. Some of the tables were PACKED with customers waiting in long lines to buy their candles or jewelry.

Every now and then someone would stop and coo over how cute the bags were…but then they’d move on!! Without buying anything!!!

Mrs. Franklin looked really disappointed. It wasn’t that the Franklins needed the money, but she had obviously worked REALLY hard! And her craft was one of the most original things there.

Finally, I had enough! I grabbed Chloe and told Zoey and her mom we were going to the bathroom. Then I told Chloe my plan.

A few minutes later, we wandered through the aisles, casually acting like shoppers. Zoey noticed us coming and gave me a funny look but I made a face to shush her.

When we got to Mrs. Franklin’s table, Chloe squealed.

“OMG, Nikki, would you look at those ADORABLE bags!!!”
She was really going for it. But I mean, the point was to attract attention.

“Definitely!” Chloe looked around to see if anyone was watching. A few people were. “If we had bags like those, the cute, cool, popular girls at school would be soooo jealous!!!”

Next to me, a grandma-looking lady picked up a Princess In Black bag. “I have a eleven-year-old niece,” she said to us. “You girls think she would like this?”

We kept up our little scene while Mrs. Franklin rang the grandma-lady up for the Princess In Black bag. More people gathered. Zoey got in on the act.

But I mean, we weren’t acting, really!! The bags really WERE cool! So cool I was planning to buy one for myself at the end of the day.

“All right, girls,” a guy my dad’s age said. “I’ve heard you squealing from across the community center.”

I opened my mouth to apologize, but then he said, “So, show me which one of these wonder bags my daughter would like.”

Chloe started interrogating him about his daughter’s favorite books, and I picked up an Ever After High bag to model.

“You really like those bags, huh?” came a voice behind me.

I whirled around, and there was BRANDON!!!!

I blushed with embarrassment. I had no idea what to say. Finally I held out the bag. “Does your grandma like Ever After High??”

He laughed. Turned out he was there with his grandparents at a table where Fuzzy Friends sells bedazzled leashes and dog sweaters to raise money for the shelter. His grandma wasn’t an Ever After High fan, but I helped him find a Descendants bag he was sure she would like.

He had to get back to helping at the Fuzzy Friends table, but made me promise to stop by and check out the sparkly leashes before we left. Which I did! I picked out a purple one for Daisy.

And the coolest thing was at the end of the day, Mrs. Franklin let us each pick out a book bag for helping!! I picked one made from Magic Tree House, and also bought one for Brianna from that book, Baby Mouse.

So here’s what I learned today:

And you know what? That’s just fine by me!!!