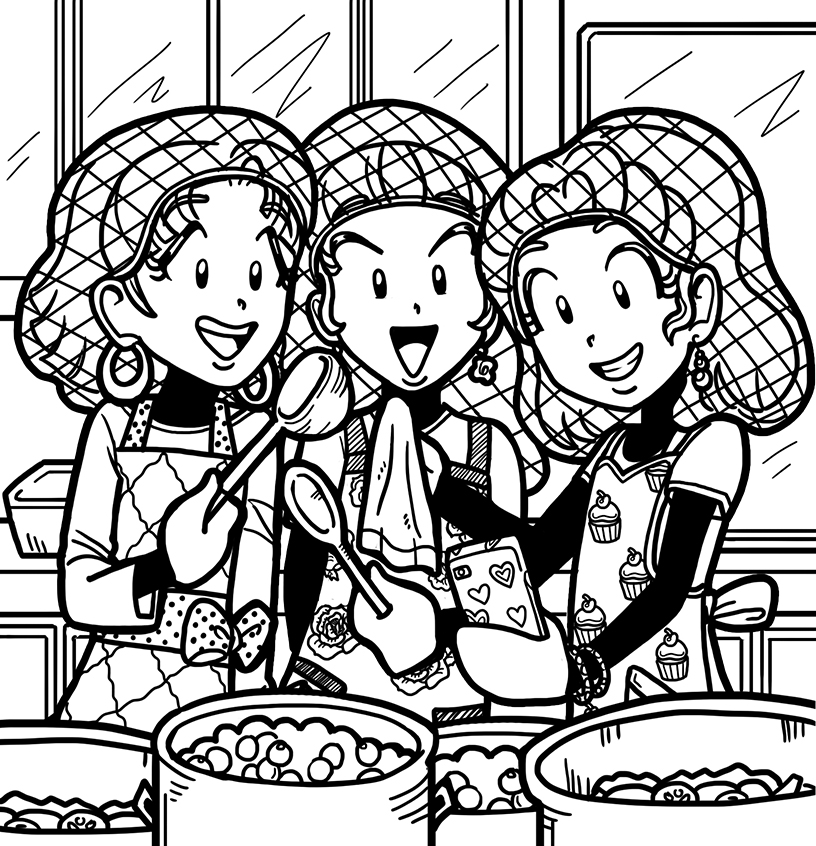 My mom got it in her head that we were going to serve at the local soup kitchen on Thanksgiving. And hey, I’m up for good deeds that also get me community service hours! We had it all planned to go with Chloe and Zoey’s families, but then we found out the soup kitchen already had too many volunteers for Thanksgiving!

(Apparently they desperately NEED volunteers the whole rest of the year, but on Thanksgiving, they get more than they know what to do with!)

So Chloe suggested we go some other day, which ended up being today, which is why I have mashed carrots in my hair!!!!!

So we picked up Chloe, whose mom had to work, and Zoey and her mom met us there. (Brianna couldn’t go because you have to be at least thirteen to volunteer, so Dad was taking her to the skating rink.)

When we walked in, I was SURE we’d accidentally gone to WCD instead, because it smelled EXACTLY like the cafeteria at school. And then when we met the lady in charge, I thought she WAS the cafeteria lady from school!  But it turned out I only thought that because of the hairnet.

She told us people were going to start arriving in an hour and a half, and we had work to do!!! (She wasn’t kidding!!)
But before we got to work, we all had to put on matching aprons, gloves, and HAIRNETS!!!

“Now girls,” my mom said, “don’t fuss about the hairnets.”

But we weren’t!! Chloe was already looking at herself in the reflection of the metal counter while Zoey and I were tugging them on.

“You look just like Miss Ethel the lunch lady!” I squealed at Zoey.

She grabbed a spatula and pointed it at me. “Only ONE fruit cup, missy!”

The soup kitchen lady cleared her throat. “If you girls are ready, one of you can start the soup, one can wipe down the tables, and the other can do dessert.”

Chloe and Zoey jumped on soup and dessert, which left me to wiping down the tables. Let me tell you, this was NOT a glamorous job. Those tables looked like Brianna had made herself a sandwich and left crumbs and jelly smeared all over them!

But, I guess it’s not really community service if you’re not sweating at least a little!
It turned out serving soup and dessert weren’t that glamorous either. When I returned to the kitchen, Zoey was hauling a bag of diced carrots almost as big as she was across the kitchen to pour into a humongous boiling pot.

Chloe was plunking scoops of yogurt from an industrial sized container into cups of fruit. There was yogurt on her face and in her hair.

I whirled back to Zoey, who was trying to lift the huge bag of carrots high enough to pour it into the even huger pot. But the bag was already open and without some help, those diced carrots were going to spill all over the place.

I rushed over and grabbed one end of the bag. It must have been twenty pounds of carrots!!! Together we toppled the carrots into the pot and only a few spilled on the floor.

Zoey was dripping sweat. “I already dumped in onions, celery, peas, and chicken,” she huffed.

“Very good,” the lady in charge barked. “Now the broth!”

Yogurt-covered Chloe had finished by that point and she helped us scurry back and forth from the fridge to the pot, hauling gallons of broth. The moms had been making sandwiches and taking rolls in and out of the oven.

By opening time, my feet were about to fall OFF! I was really grateful for the hairnet, because without it, I’m sure my hair would have been mad scientist levels of frizzy. And I was about to drop and take a nap on the giant bag of rice under the prep table.

But she didn’t wait for OUR answer before she opened the doors.

After that, there wasn’t time to be tired. We SMILED. We made EYE CONTACT. We slipped extra desserts to kids even though Soup Kitchen Lady said we couldn’t.

And there were SO many kids. As little as Brianna, and even littler. Babies!

I wanted to take all of them home and make sure they had somewhere warm to sleep! But I couldn’t do that. I could only make sure they each got a good meal and a smile. So that’s what I did.

By the end of the night, I was COMPLETELY covered in soup, blisters, sweat, yogurt and mystery goo. But, I’m still SO TOTALLY going back to help again soon !!