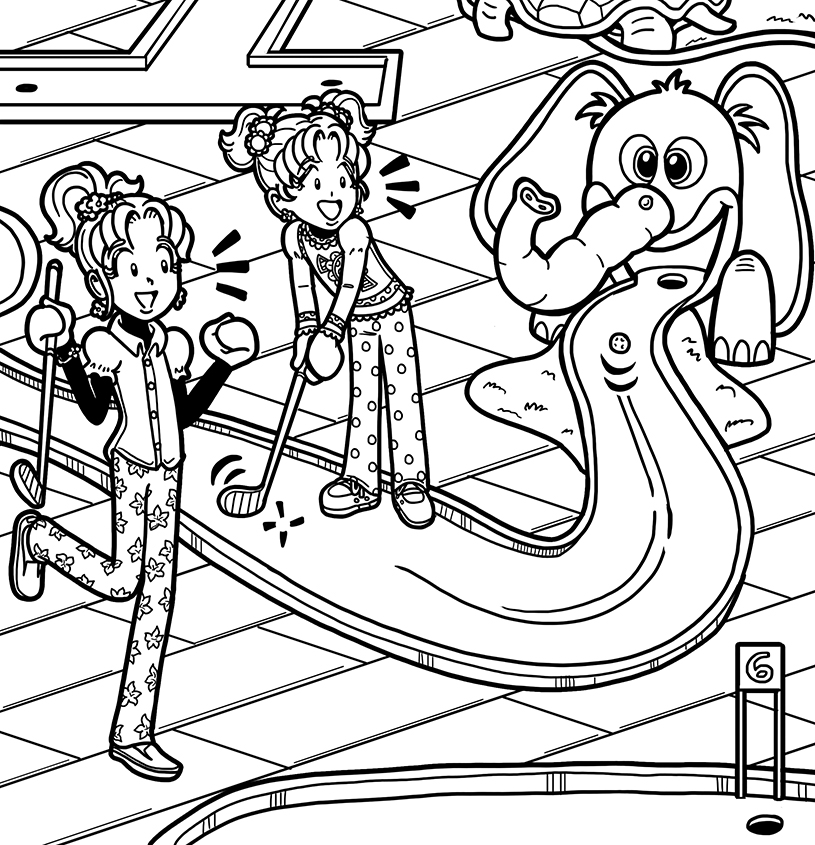 ARRGHHH!!! So, a while back I ACCIDENTALLY agreed to take Brianna mini-golfing. I don’t know what I was thinking. I WASN’T thinking, obviously!!!!

Today was the day. Dad was working and Mom had a dentist appointment. She dropped us off at Go Go Golf Family Amusement Center, which was known for its huge indoor miniature golf course.

“Have fun!!” she called out the window as she drove away and ABANDONED us there.

Brianna was so excited I was a little afraid her head was going to explode. I grabbed her by the shoulders.

“Focus!” I commanded. “We came to golf. We’re going to golf. I’m not promising anything else.”

For a second I thought she was going to whine about the other things she wanted to do. But instead, she grinned and went running over to the counter where you check out clubs and balls.

Once we had our stuff (they didn’t have purple balls, so we got a red ball and a blue ball so that at least TOGETHER they made purple), we had to decide which way to go. Go Go Golf Family Amusement Center has two different mini-golf routes:

So, OF COURSE Brianna insisted we go on the Jungle Safari route!!!

“I’ve DONE Fairy Tale Forest a billion times!” she complained. Which was true.

“But, that means you’ll be really good at it!” I reassured her.

“But Oliver Crumbly, Mrs. Wallabanger’s grandson, said he got a record score on Jungle Safari and there was NO WAY I could even finish it.” She folded her arms and made a pouty face. “He said it’s because I’m a GIRL!”

Well, that did it. We were DOING Jungle Safari. We were going to CRUSH it.

“Come on, Brianna. Oliver doesn’t know WHAT he’s talking about.”

“Okay, first of all, Brianna,” I said after we’d been stuck at the first hole for twenty minutes. “Oliver is obviously exaggerating. There’s no way he got a record score on this thing.”

This group of high school girls had been waiting pretty patiently for a while, so Brianna and I stepped to the side.

“Let’s watch what they do,” Brianna said. “Maybe we’ll learn something.”

I mean, it was kind of embarrassing. But at the same time, I was impressed by how committed Brianna was to CRUSHING her friend, Oliver. So, we watched the girls play through. One of them even told us the trick was to aim for the crocodile’s mouth, instead of the monkey tail.

And when I tried, I actually got it in! (Okay, after seven swings.)

Brianna got it in, too! (After nineteen swings.)

And, we were on to the next hole.

We carried on the same way for almost the whole safari. Taking forever, letting people play through, finally getting the ball into the hole.

(Occasionally, I would push Brianna’s ball RIGHT next to the hole while she was distracted with something else.)

(Okay, fine, sometimes I pushed my own ball right next to the hole, too.)

This was NEVER going to happen. I couldn’t just push the ball in without getting my leg trapped in the moving elephant trunk.

But, Brianna would NOT give up.

“We are going to finish this!” she screamed. “And I’m going to SHOW that Oliver Crumbly!!!”

She swung her club wildly. I ducked. Then I looked up just in time to see the ball sail right into the hole!!

I am NOT even kidding!!!

This guy wearing a Go Go Golf uniform appeared. “Did she just get a hole-in-one? On the elephant hole?”

Apparently it NEVER happens. So they took pictures of Brianna in front of the elephant and gave her a zillion tokens to spend on cheap plastic stuff and basically made her Queen of Go Go Golf Family Amusement Center!

So, I’m totally not saying I want to go golfing again with Brianna any time soon. But this time? It wasn’t so bad after all. 🙂

What great feat have you ever accomplished with your favorite game, hobby, sport or other activity?