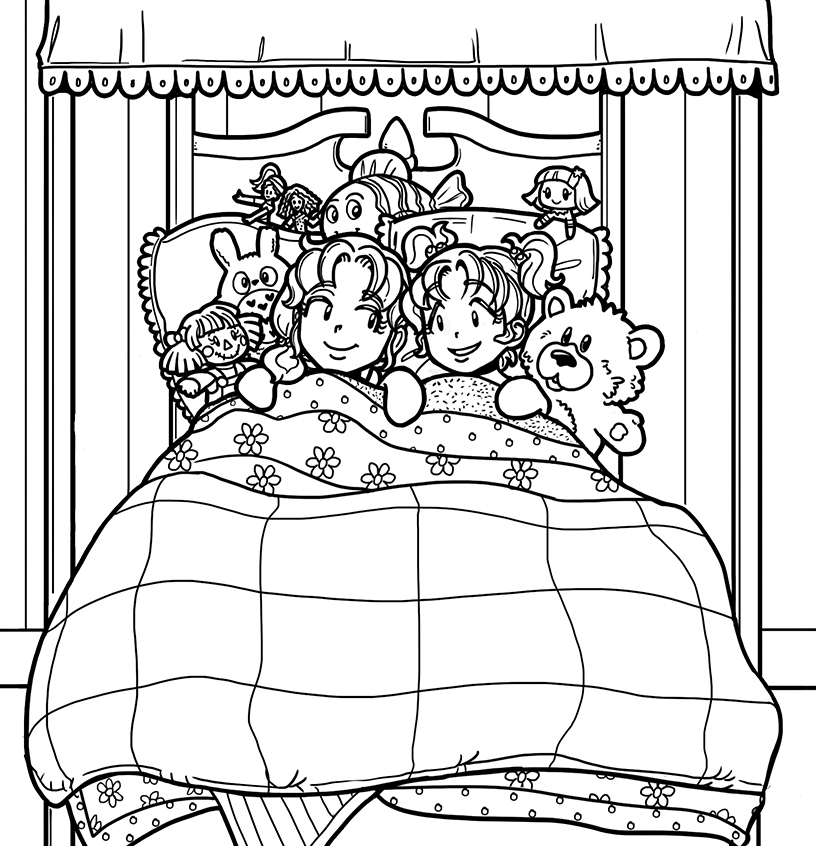 I mean, okay, at least I have warm clothes and a roof over my head. But a lot of good that roof does me. You know why? Our HEATER is broken!!!!

This morning, I was in the middle of a dream about helping scientists in Antarctica. In my bathing suit!!! (The head scientist was a penguin. They were studying polar bears. I was trying to tell the penguin-scientist this seemed dangerous, but my teeth were chattering too hard to talk!)

But then I realized I WASN’T in Antarctica. Talking to a penguin scientist. In my bathing suit.

I looked down and realized why. I was only covered by one sheet!! And my blankets had vanished!! I assumed they had fallen on the floor, so I reached over to grab them. But, they were nowhere to be found!!!

I hauled myself out of bed and lunged for my bathrobe. The ground was like ice! I could see my breath in the air!

Had someone broken into our house in the middle of the night, turned off the heat, and stolen all our blankets??

I went out into the hall to the thermostat, but I passed Brianna’s room before I got there. And there she was, with all of MY blankets piled on her bed!!!  “Brianna!!! You little blanket thief!!!!” I yelled at the top of my lungs.

Her eyes peeked out at me from beneath her pile of blankets. “I was cold!”

“I would have climbed into bed WITH you except you told me the next time I did that, you’d teach Daisy to use MY bed as a giant pee pad!!!”

This was true. But STILL!!!

“Girls, what’s going on?” My dad shuffled into the room like the abominable snowman, all bundled up in his snow mobile suit, hat, gloves, scarf like he was about to go build an igloo. But, he was looking at me like it was just a regular morning!

“Um, we’re FREEZING! Can you turn the heat back on?”

My bathrobe was NOT cutting it. I marched into Brianna’s room and grabbed one of MY blankets off her bed.

“It’s MINE! She stole it off my bed!” I complained before my dad could say anything. Then I wrapped it around me like a cloak. “Let’s build a fire while the heater gets fixed.”

“Well…” Dad mumbled, “We don’t have any firewood. And, I don’t know if you’ve looked outside but…”

I lunged for Brianna’s bedroom window and pulled back the curtains.

There was SNOW. Serious snow. Like, so much snow the roach mobile looked like a little mountain. All I could see sticking out were the roach’s antennae!!

“I’m afraid I can’t drive anywhere to get wood. And I doubt the fix-it guy will be able to make it to us to fix the heater. At least until some plows come through.”

“OMG! What if we all FREEZE TO DEATH?! Then I’ll never see Brandon again!!” I whined.

“All right, settle down. Your mother’s still asleep.”  “I dreamed I was in Elsa’s ice palace,” Brianna sniffled. “And it was all starting to fall down around me!”

I tossed my blankets back on Brianna’s bed. And then I quickly climbed in next to her. “scoot over, Brianna. Let’s have a sleepover!”

She might have been a little blanket thief, but the girl had body heat! I felt better already. At least a little.

“Why don’t you two stay here, and I’ll go see about some hot chocolate with marshmallows?”

My dad waddled off toward the kitchen, looking kind of like a penguin himself in his bulky snow clothes.

“Nikki?” Brianna said, nestling her head into my shoulder. “Do you think we’re going to turn into ice cubes?”

“No way. We’ve got blankets and PJs. We’ve also got each other. And, Dad’s making hot chocolate. We’re going to be fine!”

Brianna nodded and snuggled in even closer. After a minute or so, her breathing evened out. She had fallen back to sleep!

A couple minutes later, my dad appeared with a tray of hot chocolate. “Aw, you two look so sweet!” he chuckled.

“SHHHHHH.” I did NOT want him to wake up my very favorite kind of Brianna—sleeping Brianna!!! 🙂

He set the hot chocolate down on the nightstand. “Want me to get you a book or something?”

I almost asked for my phone, but then I said, “Actually? Could you grab my diary and a pen from my desk?”

So, I’ve been sitting here writing ever since. And I am NOT getting out of this bed until my house is warmer than Antarctica!!!!

How’s the weather where you live? What do you do to you stay warm?