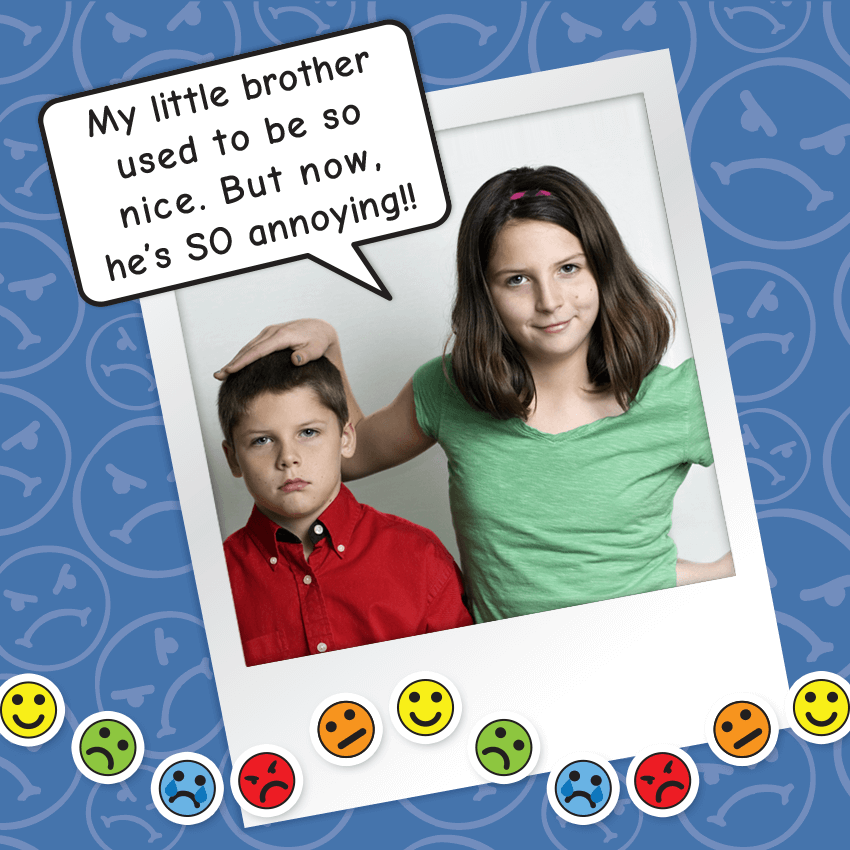 I’m worried about my little brother. He used to be super sweet when he was little, but now that he’s twelve, he’s become SUPER annoying!! I’ve tried talking to him, but he frustrates me to the point that I want to yell at him, and by then I know he isn’t listening! I haven’t really told my parents about this because I think I might be acting too protective. But I can’t help it. He’s my little brother! What should I do?

Big Sister Of a Little Jerk

Aaaawww. First of all, I think it’s really sweet that you’re protective of your brother. 🙂

You said he’s twelve years old. That’s a HUGE clue to me. The good news is, I know what happened to your brother’s personality. The bad news…there’s nothing you can do about it.

So, here it is: puberty.

Yup. You might not like to think about it, but twelve is prime going-into-puberty age for a boy. It seems like we mostly talk about physical changes that puberty brings—his voice changing, acne, body hair, etc. But there are social and emotional changes, too.

While his body is changing, he’s in this weird in-between stage of not feeling like a kid any more, but definitely not being an adult yet either. It’s frustrating. I’m sure you felt that when you went through puberty, too. And all that frustration and uncertainty can sometimes get dumped on the people closest to you.

I’m not saying it makes it okay. But all the wild and crazy hormones bouncing all over the place can make a boy moody and even aggressive. He might not want to hang out with you like he used to. He might even snap at you.

And while he might not be so awesome to be around, he actually needs your love and support more than ever. I WISH I’d had a big sister when I was first going through puberty.

Here are some things that can help the mood swings of puberty. As his sister, they’re not really within your control, but they are things you could encourage him to do and/or model doing yourself.

I hope that helps. And, I think you should talk to your parents. They’ve probably been noticing the changes in your little brother, too. They might have some ideas. After all…they’re going through it with you.

Do any of you out there have a wacky sibling? How do you deal with him or her?