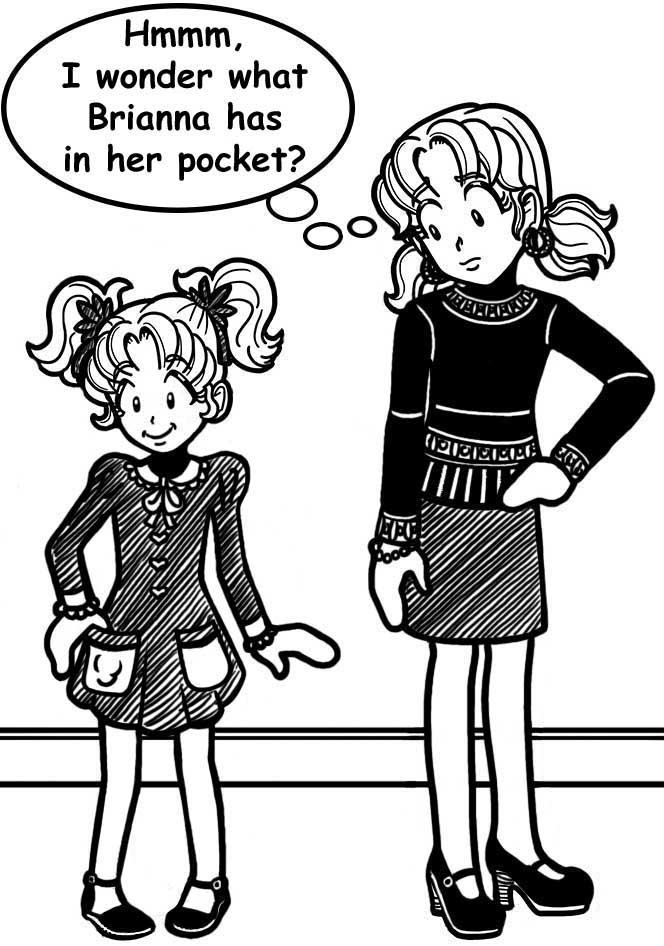 Funerals are SO not my idea of a good time, but that’s how I had to spend my Saturday!!

Dad’s main exterminator rival died suddenly last week, and somehow that meant our WHOLE FAMILY had to go to his funeral.

I don’t even understand why my DAD had to be there. They weren’t friends! They were enemies! Or rivals, anyway. But he said it was the right thing to do and to put on something black.

I put on a gray skirt and my favorite black sweater. Mom poked her head into my bedroom and told me Dad was REALLY freaked out about offending Bug Killer Kirk’s family, so we all had to be on our best behavior.

(That was his name. Bug Killer Kirk. He had a van that said, “Want Those Pesky Bugs DEAD? Call Bug Killer Kirk Today!” It ALMOST makes me grateful for the roach-mobile.)

Mom and I found Dad in the kitchen in a black suit. I was actually kind of impressed. Dad cleans up! I mean, for a funeral. But still.

And then, OMG. Brianna appeared. I’m going to give her credit: She was wearing ALL black.

Unfortunately, it was a too-small spider costume from her kindergarten performance of Charlotte’s Web. When Dad saw her, he snorted coffee out his nose and had to go change his shirt.

“Why not?” she said. “Charlotte dies too. When I played a baby spider, I felt exactly how Bug Killer Kirk’s family feels right now.”

Just then my dad howled, “I can’t find any more dress shirts!!!”

My mom turned to me. “You deal with Brianna, I’ll deal with your father.”

I marched Brianna to her room, told her she could wear the spider costume later, and started going through her closet. And I could kind of understand why she picked the spider costume. Her closet looked like a rainbow threw up in there!!

Finally, I found a cute black dress with two large pockets on the front and told her to put that on.

I thought we were maybe going to get through the whole day without too much drama. We got inside the church RIGHT before the service started, so we didn’t have to make small talk with sad people. We sat in the back, so even though it was an open-casket, I couldn’t see the dead body. Brianna and I played tic tac toe throughout the service, which was pretty short.

THEN, it was time to pay our respects.

I’ve seen this part in movies. But when my dad said we were going to Bug Killer Kirk’s funeral, I kind of never imagined the part where I had to go RIGHT UP to his DEAD BODY!!!!

Everybody lines up, and walks past the casket, which is OPEN, and says something or prays or I DON’T EVEN KNOW.

“You don’t have to say anything,” my mom whispered while we waited. “Just walk past and look respectful.”

I looked at Brianna. I noticed she was fidgeting with something in her pocket, but I was just happy she was quiet.

When we got to the front, Mom and Dad went first. Then it was my turn.

I made myself look at Bug Killer Kirk. It seemed disrespectful not to. But then I stepped aside, closed my eyes, and took a deep breath. When I opened my eyes, Brianna was done.

We’d only taken a couple steps when the next woman in line SCREAMED!

Kirk’s wife, Wilma, rushed over. Maybe she thought Bug Killer Kirk had suddenly woken up. Or the zombie apocalypse had started!

But then she reached into the casket and pulled out…A GIANT COCKROACH!!

“Is that someone’s idea of a sick joke?!” asked a lady who looked old enough to be Bug Killer Kirk’s mother.

“It’s not a JOKE,” Brianna said. “I think you should be buried with your favorite things! He loved bugs, didn’t he?”

Now I know what was in her pocket. The plastic cockroach!

“OMG Brianna! I can’t believe you actually put a BUG in the casket!!” I hissed, just as my dad rushed over to apologize profusely to Wilma. But before Dad could apologize, Wilma burst into tears.

“What a precious gift!” Wilma gushed. “This roach would have made my dear husband smile. Thank you, sweetheart!” Then she reached down and gave Brianna a big hug.

As we were leaving, Brianna stuck her tongue out at me and said, “I told you she’d love it!”

The good news is my parents probably won’t be dragging us to another funeral anytime soon!!!

Has your brother, sister or friend ever done anything outrageous or embarrassing? What was it? I’d love to hear about it!