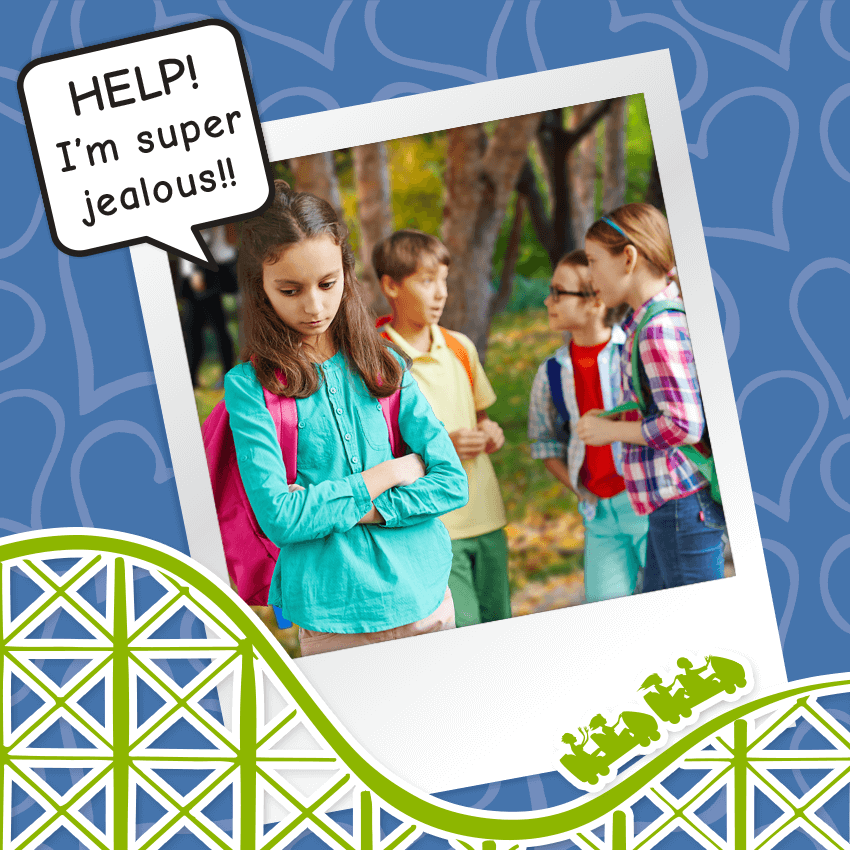 Hey Brandon,
I have a serious problem with my crush. Sometimes he’s super jealous. Like, out of control jealous! You know how girls are crazy jealous over the tiniest things? Well, that’s my crush. He gets the most jealous when I hang out with other guys. I think he has trust issues. But the truth is, when he hangs out with other girls …I get a little jelly as well. What should I do to get off this jelly rollercoaster?

Yours truly,
Really Jealous And Confused

Okay, I think jealousy is an important topic to discuss here. But first? I’ve gotta say, I have a teensy problem with this part of your letter:

You know how girls are crazy jealous over the tiniest things?

This is making a big blanket statement about all girls. Obviously jealousy isn’t only a girl thing, or you wouldn’t be complaining about your guy friend being jealous. I’ve definitely felt jealous before. Some guys might not talk about it very much, but we ALL feel it sometimes. I promise.

From where I’m sitting, girls are pretty fierce. They have to put up with a LOT and they still deal with school and friends and family stuff better than most guys I know (myself included).

So, what should you do about it?

Sometimes jealous people decide they don’t want to hang out with anyone but their crush. After all, if you’re not hanging around with those guys anymore, your crush won’t get jealous. Right? But isolating yourselves is only going to weaken the relationship. You should want a friendship that’s strong enough that you don’t get jealous to begin with!

Because, here’s the thing: people aren’t property. He might be your crush, but he doesn’t BELONG to you. And you don’t BELONG to him. Sometimes in movies or TV shows, jealousy is shown as something almost…romantic. A character will say in a happy, teasing way, “Aw…are you jealous?” It’s like, wow, you must really like me if you care about me enough to be jealous.

But forget that! Jealousy is NOT romantic. Not even a little bit. Jealousy means you want to control the other person. And nothing good can come from jealousy. I mean…it can ONLY cause fights and misunderstandings and frustration.

So what to do about it?

I think jealousy comes from insecurity. You’re worried your friendship isn’t strong enough to survive if someone more interesting comes along. Sound about right? So I think the answer is to build yourself up. Don’t put all of your time and energy into your crush. Take time to develop your interests and hobbies. Build your confidence, and the other friendships in your life. See yourself as more than just a person in a friendship with your crush. If your whole identity doesn’t depend on being so-and-so’s crush, you’ll be less insecure.

And, encourage your crush to do the same. Support his interests that might take time away from you. Be glad when he hangs out with his friends—guys or girls—because that means your friendship is strong enough to handle it.
And when he’s acting jealous, remind him why you’re his friend—and then keep on hanging out with whomever you want to! If he can’t handle that, it might be time to move on.

I hope that helps! How do the rest of you deal with the jelly rollercoaster?