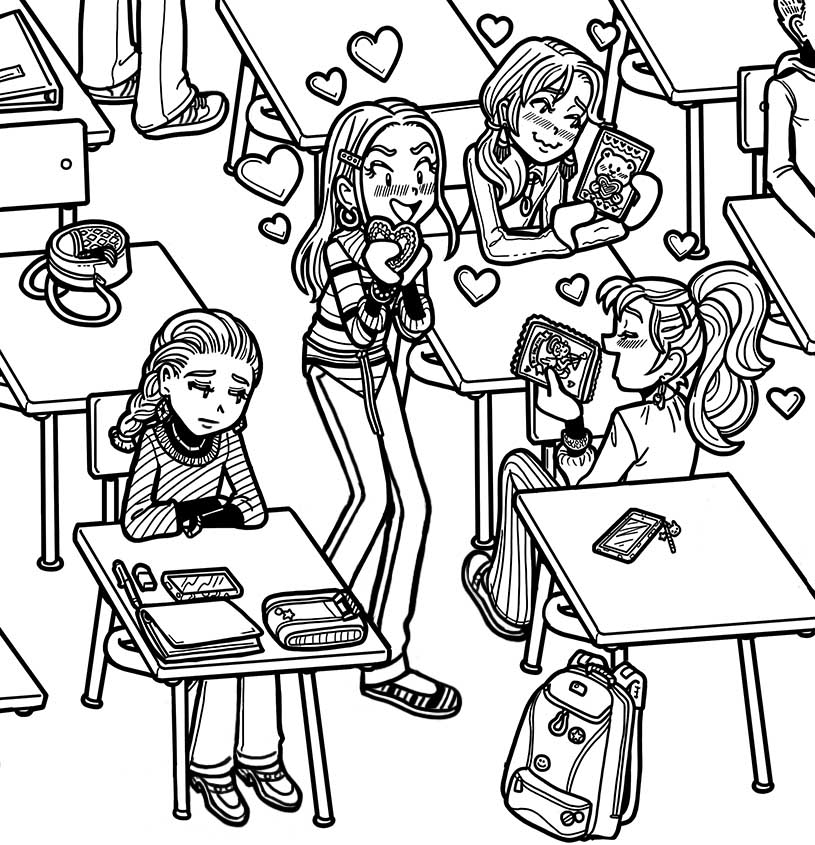 Valentine’s Day is next week, and I’m already DREADING it! I feel pathetic because all my friends have a Valentine crush and I don’t. They tell me not to let it bother me, but it still does. What should I do?

I TOTALLY get why you’d feel that way. Sometimes it seems like being a tween is ALL about dating, crushing, and looooove! And it’s extra hard this time of year, with all the hearts and flowers and valentines floating around.

But that’s not at ALL what being a teenager’s about. It’s about figuring out who you are and how you fit into the world. It’s even about friends and learning how to be supportive and how to ask for help and how to be in relationships, but not necessarily romantic ones. (And okay, it’s about stuff like school and learning, too.)

You might not really want a crush. What you REALLY want is to be like everyone else. That would be understandable, too. Not everyone is boy-crazy or girl-crazy. Some people don’t start dating until college. Some people are never really into romantic relationships!

I’m glad your friends are supportive and tell you not to let it bother you. Because it shouldn’t! A lot of times, boys are more trouble than they’re worth. 🙂 But you’re right, too – it’s easy for them to say, when they’ve got Valentine crushes. And actions speak louder than words. If they’re telling you having a crush doesn’t matter, but the next minute they’re ignoring you to text their crush…that hurts!
AND totally stinks!

So look, a couple things.

First, you might not have a crush, but you don’t really KNOW that nobody has a crush on you. I mean, not everyone goes around broadcasting their crushes!!! So there just MIGHT be someone who’s crushing on you right now.

Not that you NEED a crush. But just sayin’! 🙂

Here’s another important point I want to make: even if it’s true that NO ONE is crushing on you, that does NOT mean you’re pathetic. Sometimes it seems like the cutest girls get the most attention from boys. But you know who REALLY gets the most attention? It’s the most CONFIDENT girls. Now, sometimes they’re the same girls. The cutest ones are also the most confident ones…because they’re so cute!   But, what does cute even mean? Who decides what’s cute? Confidence is easier to define. Confidence means believing in yourself, knowing you’re an awesome person with a lot to offer, and letting your inner dork shine through! If you’ve got THAT going on, people are going to notice you and be drawn to you. And you can have that going on no matter WHAT you look like or who’s crushing on you!

But the key is that you’ve got to be confident whether or not anyone is crushing on you. And THEN someone might start crushing on you! But even if they don’t, you’ll still feel better about yourself.

So, how to be confident? Well, you’ve probably read all sorts of magazine articles or blog posts about self-esteem, etc. I think it’s mostly about focusing on the things you know you’re good at, and all the people in your life who think you’re awesome.

And sometimes with confidence, you fake it till you make it. As in, even if you don’t FEEL confident, try to ACT confident. It’ll be more effective if it’s for real. But even acting confident can help make you feel more confident. It’s a weird trick, but it actually works.

So readers, how do you handle it when you feel like the only one who doesn’t have a boyfriend? And let’s get really deep here…what do you think being a tween is all about?