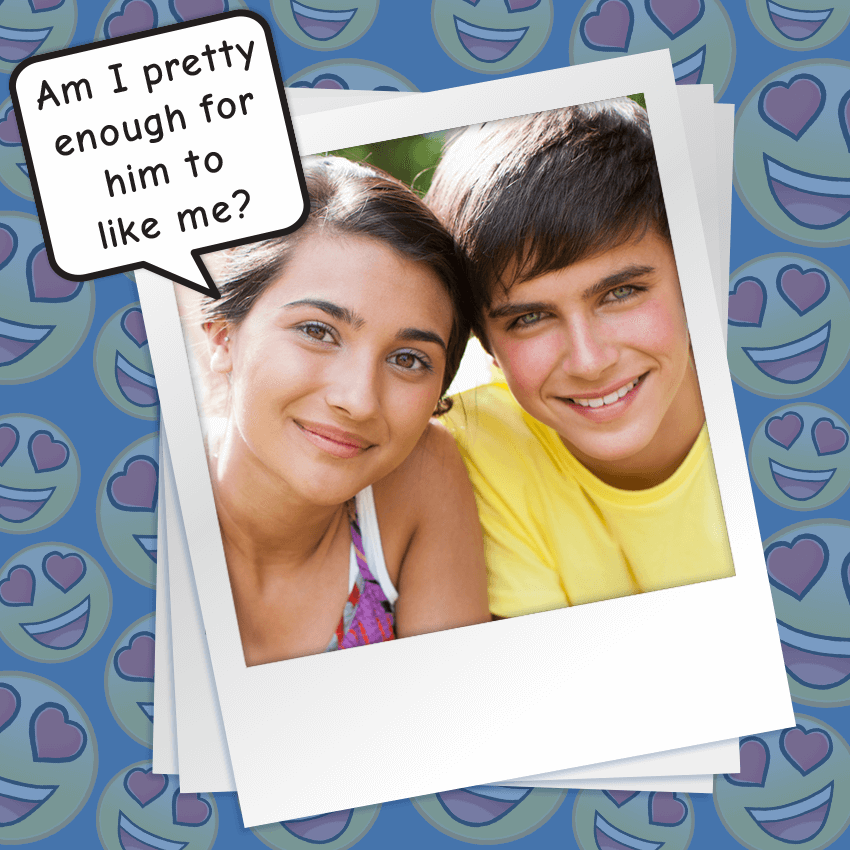 I’m having trouble with this guy at school. We used to be good friends. But now, whenever I talk to him he’s really quiet and just blushes, and sometimes I catch him staring at me. How do I know if he likes me or not? And to be honest, he probably doesn’t because I’m not pretty enough.

I get a LOT of emails asking, “How do I know if my crush likes me?” I’d guess it’s about half my inbox. Not even kidding. And I’m usually not quite sure what to say. Because the thing is, I’m just like you. I never have any idea whether or not a crush likes ME. I think you have to be a mind-reader to figure out what girls are thinking!

Let’s talk about guys. On one hand, guys are usually pretty straightforward. More often than not, they say what they mean. BUT also…guys aren’t always comfortable talking about their feelings. (Those are generalizations, and there are definitely guys who are great with feelings, or who play mind games or whatever. But when I don’t know the people involved in a situation, sometimes I have to rely on some generalizations.)

Unless you straight up ask someone, “Do you like me?” there’s really no way to know FOR SURE.

HOWEVER. There are some extremely significant clues in your post. Which is why I chose to answer yours (since I can’t answer every question on this topic).

So, you say that he’s quiet and blushes when you talk to him, and sometimes you catch him staring. This is pretty classic crushing behavior. Maybe he’s crushing. Or maybe he’s trying to decide if he’s crushing. But he’s definitely noticing you in a new way, and being awkward about it. (Totally normal. I’m sure you’ve been friends with guys one day and then suddenly you start to see them differently.)

Now, here’s the part I REALLY want to talk about – I’m not that pretty so I don’t think he likes me. Seriously? Listen up, all you girls out there. If I’m going to make some generalizations about guys, I should make them about girls, too. Why are girls so slow to realize they’re pretty? And what does pretty mean anyway? And, why do girls think guys are so shallow to think like that?

I completely don’t believe that you’re not pretty. I believe YOU believe it. But nope. Sorry. I never believe a girl when she says that. In fact, any girl who says that is definitely pretty. They’re just way too hard on themselves.

And, pretty is a weird concept anyway. Who decides what’s pretty? If YOU believe you’re pretty, you’ll have self-confidence that will make you attractive to others.

But more importantly, even if you aren’t “pretty” (whatever that means), why would that mean this guy couldn’t like you? Do you ONLY crush on guys based on how they look? Even if that’s the first thing that might attract you to someone, a crush mostly becomes about personality, right? About being smart, kind, funny or talented? If you think guys are ONLY about looks, you must not think much of guys.

And if THIS guy is only about looks, you’re way too good for him.

So, I can’t say for sure whether or not he’s crushing on you. But based on your clues, I think there’s a good chance he is. Does that mean anything has to change between you guys? Not at all. If you want things to change, I think it’s up to you to make the next move. And if you just want to stay friends, then stay friendly. He’ll get over his awkward self eventually. We always do. 🙂

How do you know when a crush is into you, and do you sometimes feel insecure? How do you deal with this?