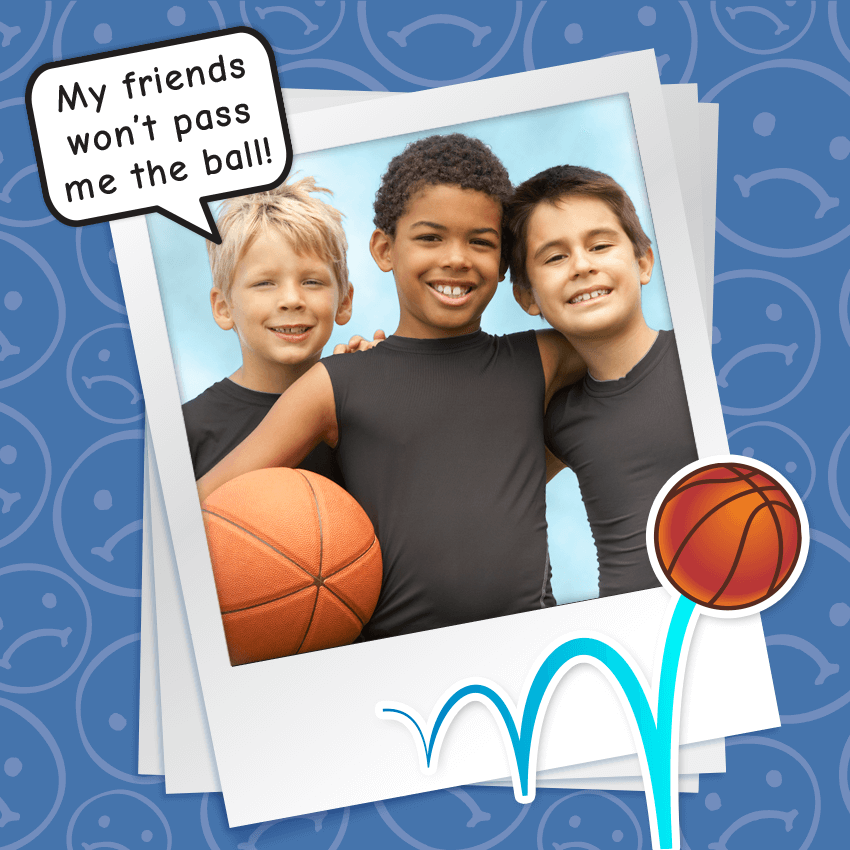 I’m always super excited to play games during PE class. But the thing is, some people HATE when I’m on their team! Like in Basketball, nobody passes the ball to me, even if I’m open. It’s like some of the teammates forget that I’m on their team. Outside of PE, I’m friendly and talk to people. But during PE, they just ignore me. Dude, you’ve gotta help me because I just wanna play!

You know, I don’t hate PE, but it sure brings out some of the WORST things about middle school. Feeling self-conscious about your body or your abilities, judging other people, getting excluded…

And sometimes, when we’re all in the game and our hearts’ racing and we’re trying to win, we totally lose sight of being decent human beings. At least, some people do. A kid who might listen politely to your idea in a group history project, even if they think it’s dumb, might be the one to hog the ball during PE.

I have no way to know exactly what’s going on in your PE class. But, it’s helpful to know that you’re not getting excluded in all things. Just PE. So, at least that provides a little glimmer of hope.

It seems like there are a couple possibilities. One–and I’m just being honest because it’s happened to me before–is that maybe you’re not the best player. And that’s okay! You have to start somewhere, and practice makes perfect, right? In an ideal world, it wouldn’t matter how good you were. People would all get a chance to play. Because you need a chance to play if you’re going to improve.

But the kids who are really serious about the game, who think they’re the best, well…they want to win more than anything. And they’re going to keep the ball away from teammates that aren’t the best. (And those judgments can be totally unfair—you mess up during the first game of basketball and suddenly you never get the ball.)

Here’s a way to tell if they’re avoiding you because they don’t think you’re good enough: you’re probably also getting targeted by the other team. Like in volleyball, they might try to spike the ball right where you are, or in baseball they might move in close when you’re up to bat.

If they think you’re not good enough…well, that’s cruddy. But here are a few things you can do. First, try your hardest not to let them get to you. Or at least don’t let them see if they’ve gotten to you. Keep playing with a good attitude. If you’re actually friendly with some of them outside of game time, maybe you could even ask them for pointers to improve your game. I wouldn’t make it confrontational, like, “Dude, you never pass to me! How come?” More like, “Dude, I’d like to improve in basketball. Could we shoot hoops some time?” Some athletes really respect those who work hard to improve.

I do think there’s another possibility for why you’re not getting the ball, and it might have nothing to do with your skills. Maybe you’re a great player. But maybe when you get the ball, you hog it. (I mean, I doubt it, since you wrote in about this, feeling like other people are hogging the ball from you. But it’s possible. So I’m just saying.) If there’s a player on a team with a tendency of hogging the ball, other players might try to keep it away from them. Right?

I think that no matter what it is (and it could be something completely different), you should try to stay positive and show you’re willing to work hard and be a team player. And if you do get the ball, get your game on and go for it! But, please remain the good sport that you are. Spread the love. Pass the ball to someone else who doesn’t get it enough.

And keep working on your game! Play outside of class with your actual friends. Everything’s more fun when it’s not for a grade, anyway. 🙂

How do you handle it if your teammates exclude you during a game? If you’re a great player, how do you include the beginners?