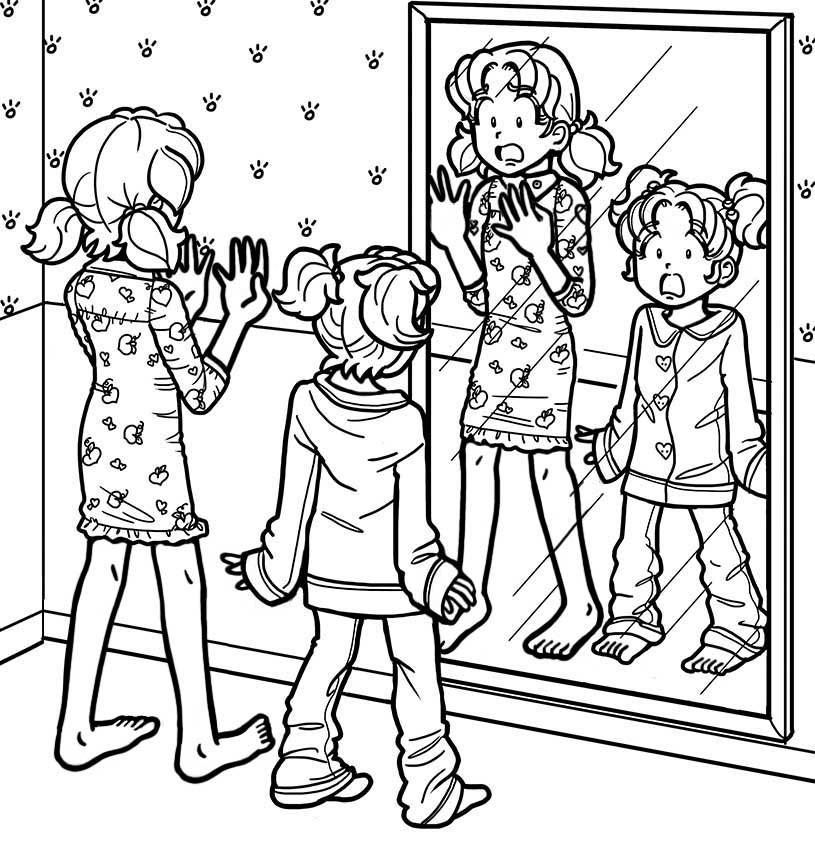 OMG! I just had the freakiest dream EVER!! If you’ve ever seen that old movie Freaky Friday, where the girl and her mom switch bodies, that gives you an idea what I’ve been through. Only it was WAY worse than switching bodies with my mom!

I woke up, and everything was normal. It was a sunny day. Brianna was screeching Princess Sugarplum songs in her room. I smelled bacon coming from the kitchen.

I got out of bed and immediately fell flat on my face, tripped by my pajama pants. Somehow, overnight, they had gotten WAY TOO LONG. This was weird. But it was early and I wasn’t all the way awake. I didn’t think about it too hard.

I shuffled down the hall, yanking on my pajama pants to keep from falling again.

“Good morning, pumpkin,” my dad called from the stove. Yep, bacon. Yum. “I heard you singing!”

“That wasn’t me,” I mumbled. My dad looked at me a little funny, but returned to the bacon.

“Morning, sweetie pie!” My mother came into the room, looking way too perky. “Are you excited for today?”

I tried to wake up my brain. I couldn’t remember any big plans for today. “Um. I’ve got to finish my English paper. And then maybe Chloe and Zoey could come over?”

My parents both laughed like I’d told a HILARIOUS joke. “Oh honey. You’re such a crack-up!” Mom said.

And THEN things got really weird.

Brianna came out of her room—we heard her before we saw her, because she was still singing at the top of her lungs.

I FROZE when I saw her. Because…she was ME! But she was Brianna! It was SO weird!!  She was wearing her regular nightgown, but it was suddenly WAY too short. Because SHE was tall! She stopped singing when she saw me. We both stood there, confused.

“Did you girls swap pajamas last night?” our mom asked.

And then my dad said, “Honey, don’t forget to walk the dog this morning.” But he said it TO BRIANNA. Or whoever that tall girl in Brianna’s nightgown was!

Both my parents turned to me with sad faces. “Brianna, honey,” my mom said, coming over and stroking my head. “We’ve talked about this. You’re just not quite big enough to take Daisy out alone.”

I thought I was losing my mind!!! “Excuse us,” I said, grabbing my sister’s arm and dragging her toward my bedroom. Why was she suddenly so much bigger than me??

Inside the bedroom, Brianna and I spoke at the same time. “WHAT IS GOING ON??!”

We turned and faced my mirror. I leaned in close. I was the smaller one. With Brianna’s hair…and eyes…and everything. Brianna reached out and poked the mirror. Except she wasn’t Brianna. She was ME!!

“Brianna,” I whispered. “I know what happened.”

“What? What happened??” she asked.

“Do we tell Mom and Dad?” I wondered. I don’t normally care about Brianna’s opinion. But she was bigger now. She seemed weirdly like an authority.

We stood there in silence, staring at the mirror.

Suddenly, tears filled Brianna’s eyes (my eyes, actually), and her lip began to quiver. “I want my own body baaaaaack!!” she wailed.

I just stood there gaping at her. Seeing a fourteen year old having a meltdown like a six year old was just…SO WEIRD.

Mom poked her head in the bedroom. “Girls, is everything alright in there?”

“Well okay,” Mom replied all suspicous-like. Then she went back downstairs.

I needed to find a way to calm Brianna down. Fast!

“Hey Brianna, let’s try to get through breakfast. It’ll be fun! Maybe we can freak Mom and Dad out a little.”

A smile spread across Brianna’s face. Which was my face. This was SO CA-RAY-ZEE!!!

So we went to have breakfast. We’d only just sat down when the doorbell rang.

My father frowned. “Nikki, would you get that?”

I kicked Brianna under the table.

Weirdly-Tall-Brianna went to the front door.

Then we heard MY VOICE coming out of Brianna’s mouth. And what she said was HORRIFYING!

I leapt up from the table, knocking over my chair as I sprinted to the front door.

“Brianna!” my mother scolded after me.

“What?” called Brianna-in-my-voice from the front door.

“Hey, Brandon,” I huffed and puffed at the front door, trying to look relaxed and realizing too late I was wearing pajamas about six sizes too big. And I looked like a first grader!

And Brianna-as-me was wearing an ITSY-BITSY nightgown!!!

Her eyes went wide and she scurried away from the door.

He grinned. “Not much, Brianna. Are you still taking ballet?”

“Okay. Well…I was just here to invite Nikki to the opening of the new dog park this afternoon. I thought she might like to go with me? And Max, next door. He’s going to bring his grandma’s dog.”

Brandon was asking me OUT!! Sort of! But I could NOT let Brianna-as-me go out with him! Who KNOWS what would happen?!?!?!

He took a few steps back. “Really? She looked great.”

I basically shoved him out the door. I could blame crazy Brianna later. He was halfway down the driveway when Brianna-as-me was BACK, this time wearing her fluffy purple bathrobe, which was no longer than the nightgown. AND she was wearing her glitter plastic dress-up high heels!!

“Brandon!” she called, racing out onto the front steps. “I love you!”

And then I woke up screaming. “NOOOOOOOO!!!”

What’s the craziest dream you’ve ever had?