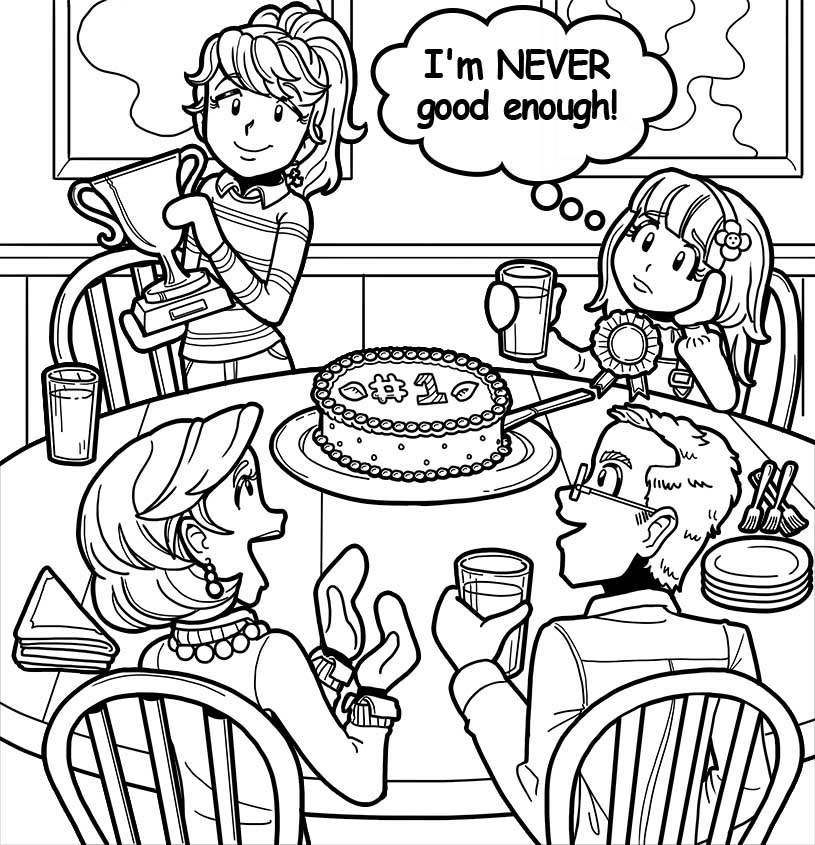 Hey Nikki! I feel like I’m not good enough when compared to my sister. I recently won a poetry contest, but she won a scholarship to study in Germany. I know, I should be happy for her! But instead, I feel envious and pathetic. Everything I do, my sister tops it. Life with her is an ongoing competition she’s already won! How can I be happy with what I’ve accomplished when her accomplishments are ALWAYS better?

Oh wow, that sounds tough! Since Brianna’s so much littler than I am, I haven’t had to deal with this kind of sibling rivalry. But, I’ve definitely felt jealous of friends and classmates, and like I can’t measure up. I can totally imagine how much tougher it would be with a sibling that’s old enough to compete with you. You have to live with them and feel those comparisons ALL the time!! I’m sure a lot of readers can relate.

If your sister is older (because of the scholarship thing), it makes sense that she’d be ahead of you in some things. But as an older sibling, she probably also feels pressures and responsibilities you don’t have to deal with yet. She might even feel like she has to set a good example for you. It’s not all roses and candy being the oldest. 🙂 But, even if she’s younger than you are…look, I know it’s hard to believe, but I am SURE there are things you are better at than she is. Even harder to believe, I bet your sister feels like she can’t measure up sometimes, too! It might not be obvious things like grades or awards, but maybe you’re funnier, or more artistic, or better at making friends.

Because, we all have our strengths, right? I read this awesome book recently called FISH IN A TREE by Lynda Mullaly Hunt. It’s about this girl with dyslexia and how she figures out what she’s good at. You should totally read it. But one quote that stood out to me went like this:

“Everyone is smart in different ways. But if you judge a fish on its ability to climb a tree, it will spend its whole life thinking that it’s stupid.”

Isn’t that amazing??! Think about that! It’s totally true!!! And think about a squirrel, who totally rocks at tree climbing. If you toss him into a river, what happens? (I mean, I’m not sure, but I’m pretty sure he can’t swim. Nobody tosses a squirrel into a river!) The squirrel is crazy-awesome in the tree while the fish is crazy-awesome in the river. It makes no sense to compare the two.

Now, when we’re talking about your sister, it probably feels like there are more comparisons to be made. You’re the same species, after all. You’ve grown up in the same situation, probably gone to the same schools, had the same opportunities, etc. But you’re still different people!

So, your last line totally nailed it for me.

How can I be happy with what I’ve accomplished when her accomplishments are always better?

First, I’m really glad you’re asking THIS question. The issue here is how YOU can be happy with YOUR accomplishments. Some people might focus on why their sister rubs her accomplishments in their face, or why their parents respond how they do. But you’re asking the important question. It’s not about anyone else’s perceptions. It’s about how YOU perceive it.

I think the main thing is to remember that fish in a tree, when you’re tempted to make comparisons. Be kind to yourself! Be patient with yourself! Allow yourself time to accomplish stuff when you’re ready. Remind yourself about the things you’re good at!

I think it’s most effective if it comes from YOU, but I think you can also turn to people you know believe in you—your parents, your BFFs, your fav teacher, even your pets, if you have them—and get the support you need to remember that YOU are crazy awesome!!

And, when you’re happy with your own accomplishments, it’ll be a lot easier to be happy for your sister about the things she accomplishes. Maybe one day she’ll even inspire you. And you know what? I bet you’ll inspire her, too!

Have you ever felt jealous of a sibling or a friend? How do you remind yourself of your own awesomeness?