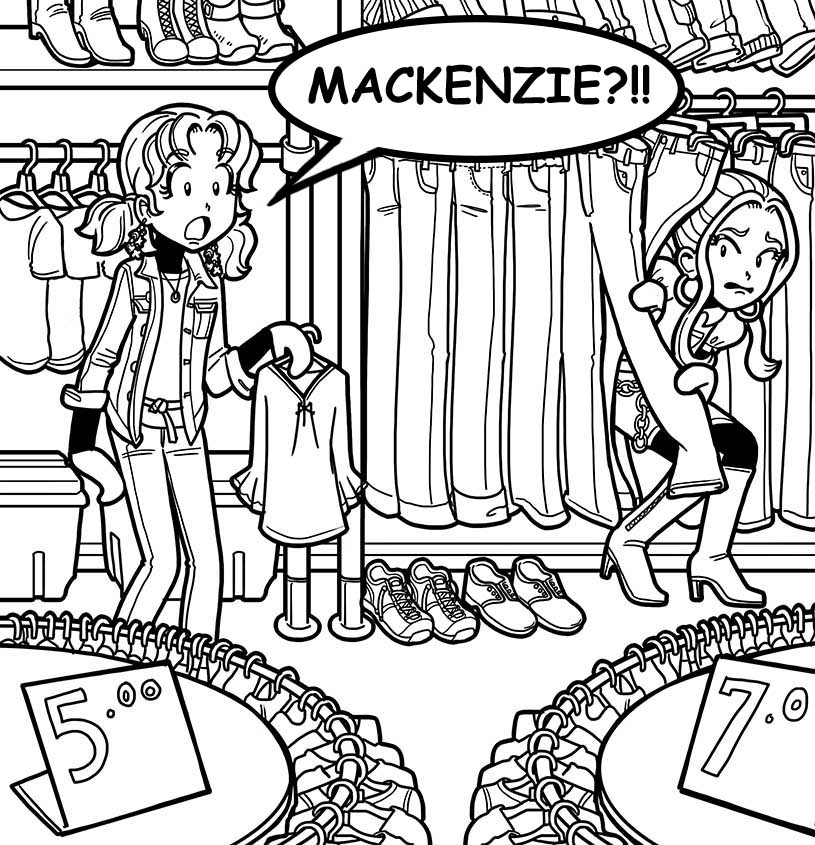 OMG, today I found the WEIRDEST thing at Goodwill!!! Something I NEVER expected to find there!

My mom had dropped me off to find some jeans while she was grocery shopping across the street. Some people might feel weird about buying clothes someone else already wore, but here’s a secret: thrift store jeans are the BEST. They’ve already been broken in, so they’re totally super soft!

I found my size and started going through the racks. Goodwill is kind of like a treasure hunt. You definitely have to dig through a whole lot of stuff your grandma wouldn’t even wear to find the treasures, but they’re SO worth it when you do!

I was digging through acid washed jeans from the 80’s and jeans with sparkly butterflies all up and down the legs. Every ten pair of horrific jeans, I’d find a good pair and dump them into my cart. I was starting to pull out the softest pair yet when someone on the other side of the rack reached for them too. Before I could see her face, she yelped and ducked down.

“You can have the jeans if you want,” I called over the rack. But she didn’t respond.

Maybe she was really shy. Or afraid of shopping confrontation. I mean, it wasn’t exactly the last art set on Black Friday. But whatever. I kept looking.

A minute later, the whole rack in front of me began to shake. At first, I thought we were having an earthquake!

Then a scowling Goodwill sales clerk showed up. “Girls,” she snapped. “This is not a jungle gym. Where are your parents?”

I looked over my shoulder to see who she was talking to. “I’m just picking out jeans, ma’am.” I thought I’d said it politely, but I could tell from the look on the sales clerk’s face that she thought I hadn’t.

“Well, your little FRIEND is about to knock over the whole rack, and if she doesn’t cut it out, you’re both going to be tossed out of here! Do you hear me?”

I’m pretty sure the whole store heard her! My face was bright red. I didn’t know WHAT was going on! I just wanted her to go away.

As soon as she was gone, the rack shook again. I shoved open the clothes. And there, crouched inside the rack of thrift store clothes was MACKENZIE HOLLISTER!!! She climbed out, glaring at me like I was the weirdo.

“Are you STALKING me, Nikki?” she said, picking sweater fuzz out of her hair.

“Uh, YOU were the one hiding inside the clothes. I was just picking out jeans!”

“Yeah. THRIFT store jeans.” She turned her nose up.

“Yeah. Because we’re in a THRIFT store!”

What on EARTH was MacKenzie Hollister doing in a thrift store??? Not that there was anything wrong with that—I was there to get some awesomely soft jeans, after all. But MacKenzie? She would NEVER wear second hand clothes!!

“Yeah, well…” She looked around like some CCPs might see her. “I’m not surprised you get your clothes here!”

I looked around the crowded store. “A LOT of people get their clothes here, MacKenzie. You too?”

MacKenzie’s eyes bugged out as she spluttered in protest.

MacKenzie and I both whipped around to see who was calling her Mac. I had never heard THAT before!!! A woman who looked like MacKenzie in about fifty years stood there, with a cart piled high with the most random stuff. Lacrosse sticks, floor lamps, picnic baskets, a tricycle. She tottered on enormous fuschia high heels, and wore skin tight jeans and a leopard print leather jacket.

“You ready? Is this one of your little friends?”

“Hello there,” Meemaw said to me. “I’m MacKenzie’s grandmother. And you are?”

“It’s okay,” I said to MacKenzie’s grandmother. She might LOOK like MacKenzie, but she sure didn’t ACT like her! “That’s a really pretty lamp in your cart.”

“Oh, isn’t it gorgeous? I make sculptures out of recycled materials. That lamp is going to be part of a mermaid’s tail! Maybe MacKenzie can bring you by my studio when it’s done!”

“I’d LOVE that,” I said, grinning at them both. I grabbed the nearest pair of horrific bedazzled jeans. “And I was just telling MacKenzie I thought these looked JUST like her!”

Meemaw beamed. “Those are AMAZING!” She reached for them and put them in her cart. “What a sweet girl you are!”

MacKenzie turned to me. “You tell anyone you saw me here and I’ll…I’ll…make your life miserable!”

“Whatever, MacKenzie,” I muttered. “That’s not really a threat because you ALREADY make my life miserable!”

Then MacKenzie stuck her nose into the air and sashayed away. I just HATE it when that girl sashays! If she’s too embarrassed to be seen shopping at Goodwill, then she should’ve went to the mall instead!

Is there a place you were at or an activity you participated in that caused you extreme embarrassment? I’d like to hear all the funny details!