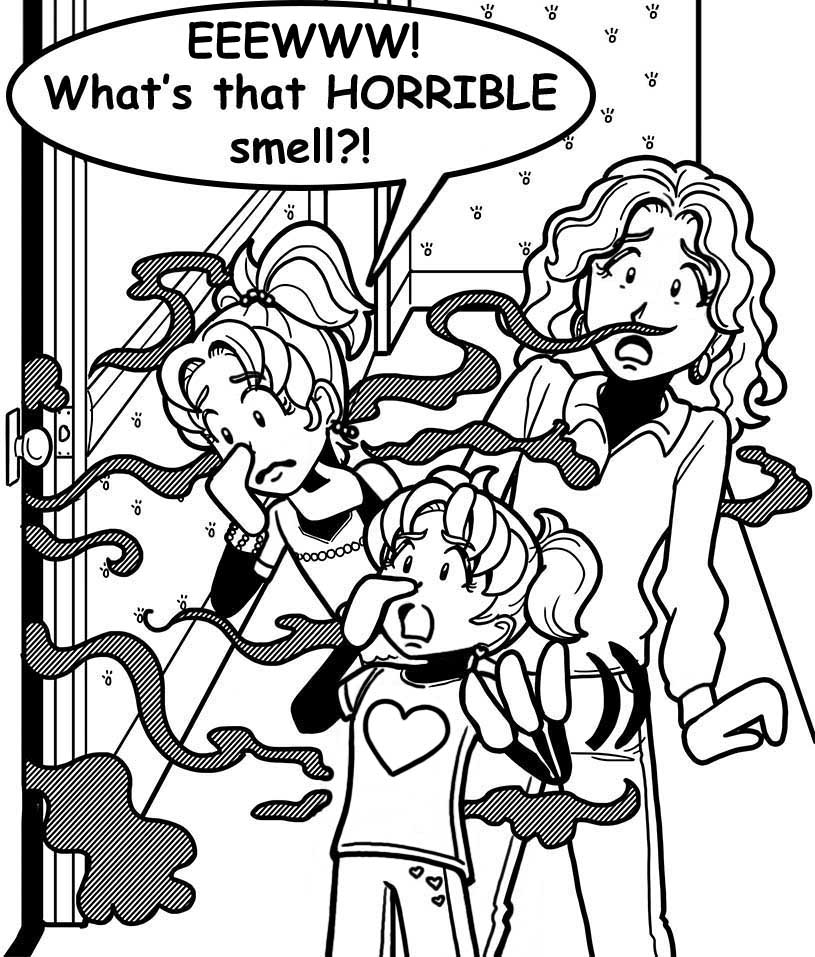 Spring is here!! Sunshine! Flowers blooming! The hope of summer!

And what else? Apparently, spring cleaning! ☹

I was delivering a stack of folded laundry to Brianna’s room and I almost fell over when I opened her door. It STUNK like crazy!

Mom made her way over.  Of course, by calling for Mom, that meant Brianna came running too.

“Why were you in my room?” she shrieked. She’s been really secretive about her room lately. Mom says she deserves privacy, too.

“I was delivering your laundry, you little brat. Mom, it smells like something died in there.”

My mom made the same face I was probably making and gagged. She turned to Brianna. “WHAT is going on in your room?”

“Nothing!” Brianna made her best innocent angel face. “Look.”

Mom and I both peeked into Brianna’s room. It actually looked way neater than usual. Mom held her breath and crossed the room to open the window.

“Well.” She looked worried. “Maybe it just needs to be aired out in here. I think I’m going to lie down for a bit. That smell made me feel a little queasy.”

I waited until Mom was out of the room. “Listen up, Brianna. Your room might look clean, but I INVENTED shoving it all under the bed to pass inspection.”

“I know there’s SOMETHING in there that shouldn’t be. Mom doesn’t feel good. So we’re going to take care of this together, RIGHT NOW.”

Brianna flung her tiny body across her doorway. “I NEED MY PRIVACY!!!”

I bent over and put my face right up next to hers. “Brianna? Do you want to show ME what’s under your bed? Or do you want me to get Mom?”

She crossed her arms tight and stepped aside. “FINE.”

The open window had NOT helped the smell go away.  It simply made her room very cold. Just because it’s spring doesn’t mean summer temperatures are here yet!

“Are you going to show me, or do I have to find it myself?”

Brianna flounced onto her bed and stared at the ceiling.

“Okay then.” I reached under her bed, bracing for the worst. At first it was the usual—balled up clothes, broken toys, mismatched shoes, and crumpled papers. To be fair, most of that stuff is under my bed, too.

The next thing was weirder. When I finally got it out, it was…a cell phone. Dad’s broken cell phone that we replaced months ago!

She rolled over and looked at me. When she saw the cell phone, she scrambled down to the floor and grabbed it from me. “I’m going to fix it!”

Well, she had me there. And the busted cell phone wasn’t causing the smell. I kept digging.

I found about fourteen hangers, a package of dry pasta, a box labeled TOP SECRET that had only candy wrappers inside, a cheese puff necklace, MY perfectly soft green hoodie that had been lost forever, and a TV remote (I was wondering how the channels were changing on their own!).

But THEN I found it.

I didn’t know what it was at first. But I knew I’d found it, because Brianna got really upset as I pulled out a pile of sticks, twigs, and leaves. A stuffed chicken was sitting on top of it.

“You can’t take them now!” she wailed. “They’re just about to hatch!!”

I reached for the chicken.

“I’m not going to take your stuffed chicken,” I said. “I just have to see…”

And do you know what was underneath the stuffed chicken? EGGS. Real eggs, ROTTEN eggs, eggs Brianna must have stolen from the kitchen a WHILE ago.

“Brianna, why do you have a nest of eggs under your bed?”

“I’m saving their LIVES!!!” She leaned toward the nest like she wanted to hug it, but even she couldn’t stand the smell. I don’t know HOW she had been sleeping in here!!!

“So I thought if I rescued the eggs from the refrigerator, and kept them warm under a mama chicken, they could become chicks!”

I mean…it made sense. Not accurate sense, but six-year-old sense.

I tried to be gentle while I explained that the eggs were rotten and would not become chickens. I think she was kind of relieved that she wouldn’t have to put up with the smell anymore.

We performed a brief, moving funeral ceremony next to the trash bins outside and then dumped the eggs and nest. (I thought Mrs. Featherbottoms would be okay after going for a ride in the washing machine so that she wouldn’t end up in the trash too.)

“Tell you what, Brianna,” I said as we headed back to her room. “You help me clean up the rest of the stuff under your bed, and I’ll walk you to the garden store to look at their baby chicks. Okay?”

She narrowed her eyes at me. “But I get to keep the cell phone!”

I held up my hands in surrender. “Okay, fine. You get to keep the cell phone.”

We shook on it. And then we headed to the garden store to see those adorable chicks!

What’s the craziest thing you’ve ever found under your bed?