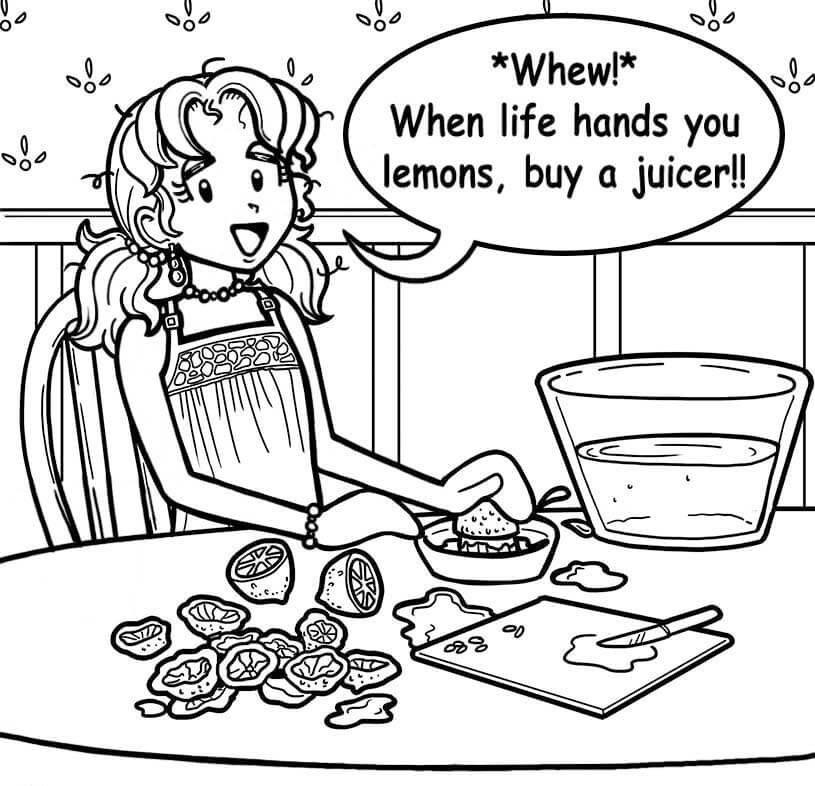 Do you remember when I made those goals for the summer? And one of them was to have a lemonade stand and raise money for Fuzzy Friends??

If I’d had ANY idea how that would turn out, I would have dug all the change out of the couch cushions and donated THAT instead! It would have been WAY less stressful and probably more money, too!!

So first of all, when Brianna saw the sign I’d made that said “LEMONADE STAND: ALL PROCEEDS GO TO FUZZY FRIENDS” she FREAKED. I mean red-alert meltdown!

The lemonade stand was HER IDEA, which meant all proceeds should go to HER!! At least, according to Brianna. She doesn’t even know what proceeds are. But she figured out the main idea and she had OPINIONS!

Finally, she agreed to split the money half way. I figured that would be okay, because if something’s for charity, people usually spend more anyway.

So then we started to make the lemonade and you are NOT going to believe this, but we were out of sugar! (I know, I KNOW, we should have just bought already-made lemonade! But Brianna wanted to squeeze the lemons, which actually meant she wanted to squeeze half a lemon and then leave me to do all the rest of them.)

When I realized we were out of sugar, my mom REFUSED to go back to the store. She was madly trying to read an entire book for a book club meeting that night. Way to leave things to the last minute, Mom! ☹

So I sent Brianna next door to ask Mrs. Wallabanger for some sugar. I couldn’t go myself, because I was still squeezing the lemons! Brianna came back with a Tupperware full of sugar, I dumped it into the lemonade, and we headed outside.

We got all set up and right away, a lady walking a dog came around the corner.

“Oh! A lemonade stand!” She acted like we were giving away puppies or something.

The woman pulled a dollar bill out of her pocket. “I think your lemonade looks like it’s worth more than that,” she said. “Keep the change.”

SWEET! Brianna snatched the dollar and I poured the woman’s lemonade.

“You kids are such hard workers,” she said, right before she took a giant gulp…

…and then SPIT IT OUT ALL OVER US!!

The woman was sputtering in outrage and SO WAS I. Before I could figure out what happened, she said, “That was a NASTY trick!” and marched off!!

I wanted to run after her, but Brianna was starting to whimper.

“It’s okay, Brianna,” I said, handing her some napkins. “Don’t worry about that mean old lady.”

She wasn’t actually old. But clearly her HEART was all shriveled up into nothing!

Brianna and I looked up from wiping ourselves off to see Mrs. Wallabanger’s grandson, Max. “Grandma said you guys were having a lemonade stand. Got any left for me?”

He waved a dollar bill in front of us. This time, Brianna hesitated. But she couldn’t hold back and snatched the dollar bill again.

I still hadn’t gotten over the crazy spitting-lady, but I was glad Max had showed up to distract Brianna. I poured him a cup of lemonade.

He grinned and took a sip, and then his grin VANISHED. He looked like he’d just swallowed a bug. Or WORSE! I started to get an uneasy feeling in my stomach.

“Um, thanks,” he choked. “This is delicious.” Then he hurried back toward his grandma’s house.

“Max, wait!” I called. He turned, but didn’t come back to the table. “What is it? Is something wrong with the lemonade?”

He stared at the ground. “Um, it’s…great. I’m sure you guys worked hard on it…”

Brianna grabbed the pitcher and sloshed some into a cup. She took a swallow and then SHE SPIT IT OUT ON ME TOO!! ☹

Was I wearing a sign that said PLEASE SPIT HERE?!

I took her cup and sipped.

OMG! It was like swallowing ocean water! With lemons! And extra salt!!

Max crept back toward the table. “I think maybe…you put in salt instead of sugar?”

I turned to Brianna. “What did you say when you asked Mrs. Wallabanger for sugar?”

I DID know that.

I dropped my head down onto the folding table. Which was sticky with spit-out lemonade. Gross!

“Hey, no worries,” Max said. “My grandma’s got a bunch of lemonade concentrate in her freezer. We could mix it up and POW! You’ll be back in business!”

At that point, I was DONE with the lemonade business. But Brianna looked so happy with Max’s suggestion that I couldn’t say no.

But hey! It’s an excuse to call Brandon up, right? I have something very important to give him, after all! 🙂 (I don’t have to mention that he could probably get a bigger donation out of his couch cushions!)

What have you done or would like to do to raise money for something that’s super important to you?