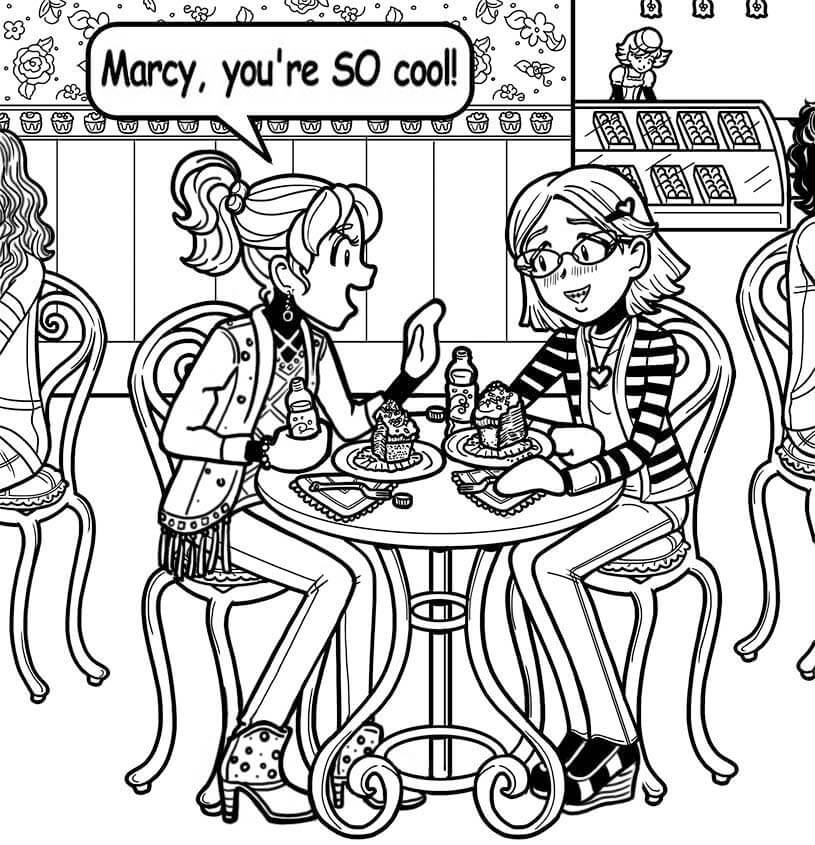 Okay. So, remember when I first started going to WCD and wanted to fit in with the CCPs (a.k.a. Cute, Cool and Popular kids)? And, for a split second, MacKenzie actually BRAINWASHED me into wishing I was invited to her birthday party?

Well, MacKenzie has made my life a total NIGHTMARE since then! And, what she and Jessica just did to my poor friend Marcy has reminded me why I’m SO OVER trying to fit in with them, and that I’ll never, EVER let MacKenzie brainwash me again!! 🙁

Marcy and I were hanging out at The Cupcakery munching on yummy cupcakes and minding our own business when MacKenzie and Jessica came up to our table.

MacKenzie grimaced at us like she just caught us eating cupcake crumbs off the floor or something. Then she pointed to Marcy and bellowed, “Eeewwww! Jessica, do you see what Marcy’s wearing? It looks like she just went dumpster diving for a new wardrobe!”

Jessica cackled and nodded in agreement. “Yeah, how pathetic! Summer’s over, but she’s still a HOT MESS!”

Marcy blushed and looked down at the floor, visibly hurt and embarrassed. I was SO ANGRY at MacKenzie and Jessica for picking on her like that! I wanted to take my Cute Confetti Cupcake with sprinkles, smear it all over their designer clothes, and then dump my bottled water on them to see if they’d melt like the Wicked Witch did from The Wizard Of Oz!!

But, I didn’t want to stoop to their level. So I just rolled my eyes and jokingly told Marcy, “It looks like somebody left the door open long enough for flies to come in. And like, here are two really BIG ones with hair extensions and lip gloss!”

MacKenzie flipped her hair. “OMG Jess! Dorks are highly contagious, so let’s grab our cupcakes and go before we both come down with a bad case of LAME!”

Marcy let out a big sigh and glumly poked her half-eaten cupcake with a fork. Apparently, she was still pretty upset.

I placed my hand on her shoulder. “Hey Marcy, are you okay?”

“Um, yeah. Thanks!” She looked at me with a weak smile. But then a blank, sullen stare washed over her face. “It’s just that I’m so tired of being picked on by MacKenzie and Jessica that I sometimes wish I could be cool. That way, they wouldn’t pick on me so much.”

I could kind of see where she was coming from, because I had been there myself. But STILL! I wasn’t about to let Marcy believe she wasn’t cool enough already to deserve some respect.

Girlfriend needed a serious pep talk about the real definition of “cool!”

So, to cheer her up and convince her of how cool she really was, I listed some things that would make Marcy, or anybody else, super cool to me. And when I read the list to her, it really cheered her up and put things into perspective! Being cool isn’t all just about a trendy outfit, having all of the latest stuff, or fitting in with the CCPs. It’s much more than that!

Hey readers, what are things that really make someone cool to you?
List them in the comments!