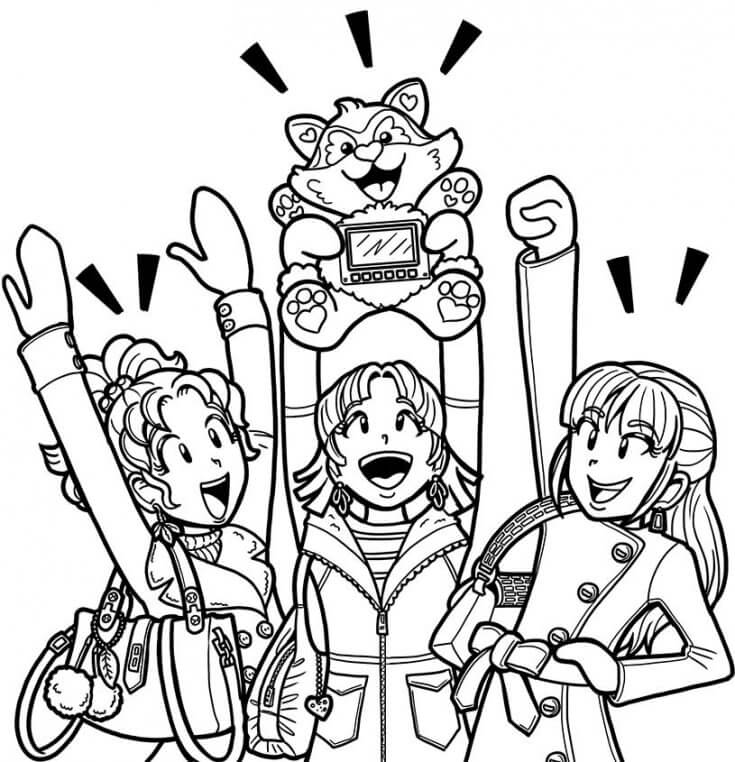 We were on a MISSION. Chloe, Zoey, and I were going to Westchester’s biggest mall on Black Friday, and we were going to get a SmooshPet or DIE trying!!

Okay, nobody was going to die.

I should also explain what a SmooshPet is. SmooshPets are the hot new thing, in case you DON’T have a six-year-old in your life who gets on one topic and NEVER. STOPS. TALKING! Brianna HAS to have one for Christmas, and my parents want her to stop talking about it, but they also don’t want to go to the mall on Black Friday. However, the thing is if you DON’T get your SmooshPet on Black Friday, they’ll be sold out for the rest of the holiday shopping season.

Zoey was over one day and heard my mom on the phone, calling stores and trying to track down a SmooshPet before Black Friday, to avoid the madness. But Mom wasn’t having any luck. So Zoey—probably because she doesn’t have any annoying siblings of her own—told Mom that WE would take care of it.  Just great! 🙁

So that’s how we ended up at the mall at SIX A.M. I am SO not kidding!  Zoey had borrowed these Bluetooth thingies from her dad’s work, so we could stay in constant communication with each other while or hands were free to the snatch a SmooshPet and get the HECK out of there!

Zoey’s research told her our best bets to find a SmooshPet at the mall were Cool Toys Inc, Madeline’s Collectibles, or Gadget Shack.

Gadget Shack was at the far end of the mall, and I was skeptical they would even have them, so Zoey volunteered to go. She even wore her roller shoes to get there faster. I was going to Cool Toys Inc, because it was going to be the most bonkers, and we were doing this for MY sister, after all. Which left Chloe at Madeline’s Collectibles.

As soon as the mall doors opened, the madness began!

“Let’s do this, girls,” Zoey said into her Bluetooth thingie, and it screeched a little in our ears, because we were all still standing together.

Zoey took off on her wheels toward Gadget Shack.

Chloe grabbed my hand. “I love Brianna,” she said. “And I’m going to try really hard. But I hope you can forgive me if I don’t return with a SmooshPet.”

I grabbed her by the shoulders and looked her in the eye. “Just make it out alive, my friend!”

I’d taken three steps toward Cool Toys Inc when Zoey’s voice crackled in my ear. “Status update? I’m almost at Gadget Shack, but there’s a huge crowd of shoppers in the way. Over.”

“Oh, um…excuse me! Sorry! Oh, I didn’t see you there, ma’am…” We listened to Chloe apologizing her way toward Madeline’s Collectibles for a minute before she said, “Hey guys, I’m good. Almost there. Oh, over and out!”

“Over and out’s for when you’re all done on the call. Just over,” Zoey corrected.

I had reached Cool Toys Inc. The mall had JUST opened but somehow the massive store was still FULL of people. And I realized I had no idea what section SmooshPets would be in. They were tiny stuffed animals with screens in their bellies and you had to play games online to earn points to “feed” them or they’d die. (It sounded stressful to me!)

“You guys?” Chloe interrupted. “Madeline’s Collectibles is closed. It looks like maybe it went out of business.”

“Argh! HOW did I miss that in my research?” Zoey said. “Nikki, try Electronics first. Chloe, scope out the kiosks down the middle of the mall, just in case. Over.”

Electronics was the biggest madhouse in the whole toy store! People were pushing and shoving for game systems, tablets and phone accessories. I didn’t see anything that looked fuzzy or cute. Of course, it was hard to see ANYTHING at all with all the people!

I decided to try Games next, but that was like, board games and video games. Nothing. So finally I went to Stuffed Animals. And not a single one of those stuffed animals had a belly screen! How did the biggest toy store in the mall NOT have a SmooshPet?

I headed toward the front of the store, figuring I’d meet up with Chloe and search the kiosks. But on my way out, I saw it! At the front, up by the registers, a SmooshPet display! With…ONLY ONE SMOOSHPET LEFT!!

I’m not gonna lie. I shoved my way past one person. But it was this super-rude teenage dude who was TOTALLY in my way and didn’t move when I asked him nicely TWICE!

When I finally got around him, there was a little old lady, reaching out and grabbing that last SmooshPet.

Operation SmooshPet was about to become a complete and total FAILURE!! 🙁

I had failed Brianna. Who drives me bananas, but who was going to be HEARTBROKEN when she didn’t get a SmooshPet for Christmas!

We met at Dairy Queen. Chloe looked exhausted. Zoey held the SmooshPet triumphantly over her head.

“That was AMAZING,” she said. “What a rush! We should do this every year!”

I texted my mom the good news, and she said I should treat the girls to ice cream and use the emergency credit card.

So our mission was accomplished, all thanks to Zoey. After ALL the trouble to get that SmooshPet—when Brianna opens it up on Christmas morning, I can hardly wait to play with it too!

Hey readers, what’s something you’ve always wanted that was super hard to get your hands on?