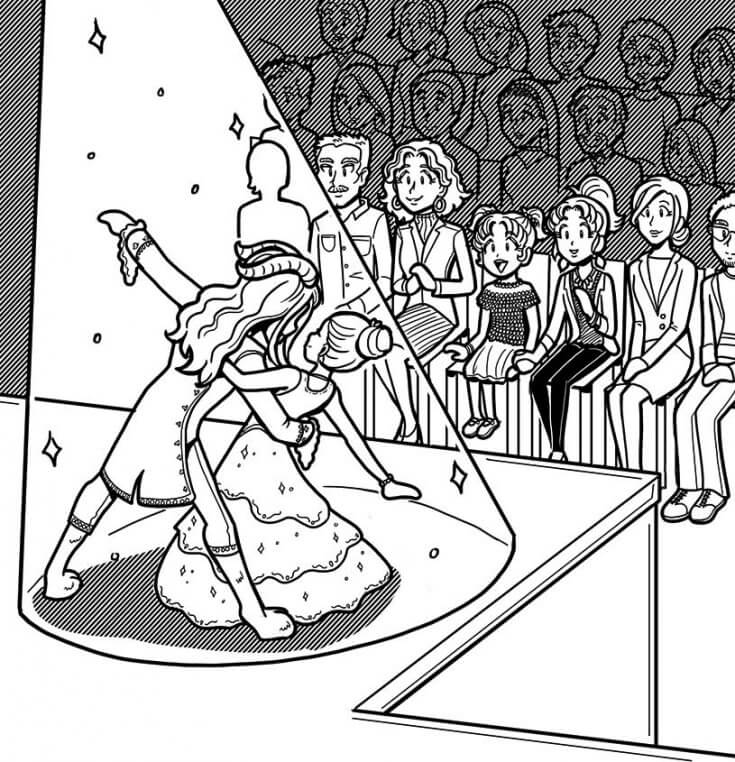 I was NOT the one who begged to go see Beauty And The Beast. That was ALL Brianna. Her ballet teacher was dancing in this production and she begged to go see it. That was fine with me—a bonding night for Brianna and Mom, right? But nooooo, Mom thought it would be a fun cultural event for the WHOLE FAMILY.

So we got all dressed up (which, for Brianna, meant she wore her Princess Sugarplum costume), picked up Grandma Maxwell at the retirement home, and headed to the ballet.

I have nothing against seeing plays—I mean, I’m totally impressed by the discipline it takes to dance in one. But, to be honest, I just wasn’t that excited about seeing Beauty And The Beast. Ever since I was a little kid, the half-man-half-buffalo-looking beast kind of freaked me out. I actually had a nightmare about the beast after my mom took me to see the movie for my sixth birthday!

Everything was going fine until Belle stumbled into what she thought was an abandoned castle. Then the hideous Beast stepped out of the shadows to confront her.

I took several deep breaths. It’s possible I even closed my eyes for a few seconds. But they flew open when I heard a scream. (For a second I thought I was the one screaming, so if I’m honest, it was kind of a relief to see that it was Brianna. But only for like a second. I’m not a monster!)

One second she was screaming, and the next second, she was out of her seat and racing toward the exit (still screaming, though. That girl’s got some LUNGS on her!).

My mom started to get up, but I was closer to the aisle—plus, I was NOT going to miss this opportunity to escape the beast too!!  So I said to my mom, “Don’t worry.  I’ll go after her!”

The usher glared at me as I burst through the doors into the lobby and blinked in the bright light. Whatever, usher! I’m pretty sure Brianna is NOT the first kid in the history of mankind to be afraid of the beast.  After me, maybe she was the SECOND kid!

I didn’t see her. It was dark and snowy outside, and I didn’t think she would go running out into the street. That girl is koo-koo, but she’s not dumb.

“Brianna?!” I looked behind a table full of Beauty And The Beast stuff for sale.

I heard a sniffle. It was coming from the giant Christmas tree in the corner of the lobby. Had she gotten behind the tree or something?

I still couldn’t see her, even standing right next to the tree. But I sat down among the presents.

“Listen, Brianna.” I said. “I was a little nervous about coming tonight. I’ve been afraid of the beast since I was a little kid. So I don’t blame you for being scared.”

There was a rustling sound. And then right next to me, the lid of a GIANT gift box popped off and Brianna stuck her head out.

“Why didn’t you tell me the beast was so scary?!” she whimpered.

It was a good question. But actually, I didn’t think Brianna would be afraid!

“You’re really brave, Brianna,” I said. “And you’re still brave, even if the beast freaked you out. I just didn’t think you would be scared. Or maybe I was just too busy worrying about him myself, and I didn’t do a good job of being your big sister.”

Brianna climbed out of the box and into my lap. “That’s okay, Nikki! You’re not as brave as I am. I understand!”

“How about this Brianna?  Let’s go back in to see the rest of the show.  And you can hold my hand during the scary parts so that I’ll feel better!” I teased.

So, we went back in to see the rest of the play, and it was actually pretty exciting! Brianna would reach over and squeeze my hand whenever the beast appeared on stage, and I would squeeze her hand back.

Being a big sister is A LOT of hard work, but I love it! 🙂

What’s your favorite play or movie to see during the holiday season, and why do you love it?  Tell us all about it in the comments!