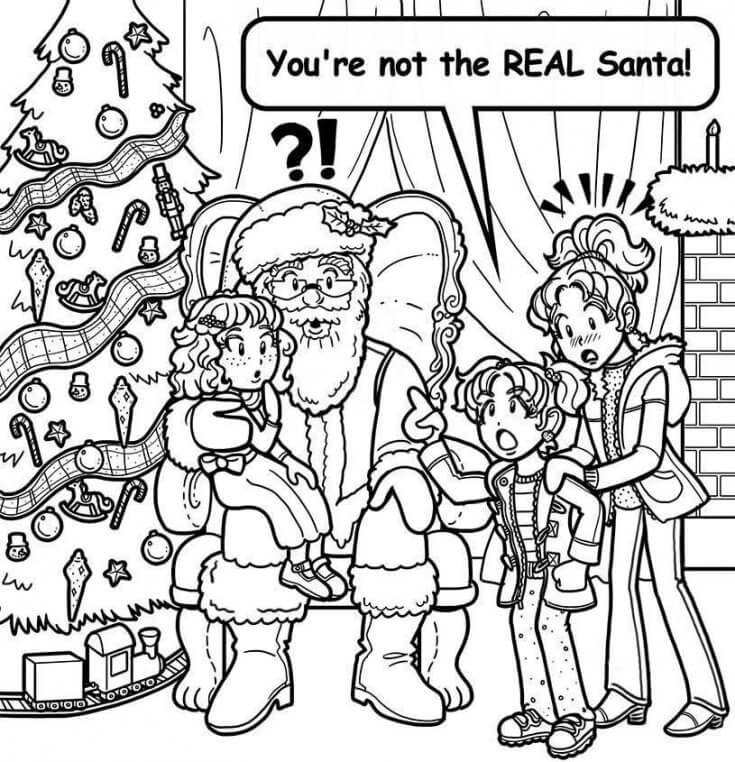 I should have known better than to take Brianna to the mall during the holiday season. But she came to my room and dumped her piggy bank out on my bed and told me she wanted to get Mom  “BEE-YOOO-TEE-FUL JEWELS” for Christmas.

I mean, she may be a brat, but I’m not THAT heartless!

I was pretty sure we wouldn’t find much for $7.62, which is how much money she had saved up. But I figured that store where everyone gets their ears pierced would have something Brianna would think was BEE-YOOO-TEE-FUL anyway.

Which is why Dad dropped Brianna and me off in the slushy mall parking lot and told us he’d be back in an hour. I purposely told him to drop us at the end of the mall that’s NOWHERE NEAR the Santa’s Workshop area. I had agreed to help Brianna get a present for Mom. I had NOT signed up for waiting in line to see Santa.

Which is why I was shocked when Brianna squealed, “SANTA!!”

We weren’t even inside the mall yet!

I looked where she was pointing, and there was Santa, leaning against the side of the building, texting!!

“Nikki, come on!” Brianna tugged me toward Santa. “I can tell him what I want without waiting in line!”

Obviously Santa was on his break. Then, right before our eyes, he pulled a candy bar from his pocket, reached up, and PULLED HIS BEARD OFF.

I tried to shield her eyes, but it was too late. The damage was done.

“THAT GUY’S NOT SANTA!” she shrieked.

He looked over, realized MAYBE he should take his break somewhere more PRIVATE (you think?!) and hurried away.

Brianna was having a major meltdown. I tried to convince her to go look for Mom’s beautiful jewels, but she was having NONE of it!

Just GREAT. All I needed was Brianna trying to start a kiddie revolution at Westchester Mall. But my dad had left to run his own errands and my mom wasn’t supposed to know where we were. I had to handle this on my own.

“Brianna, look. I’m sorry you had to see that. That man was one of Santa’s helpers, because Santa is really busy this time of year at the North Pole and doesn’t have time to be at all the malls all over the world. It doesn’t mean Santa isn’t real…”

She looked at me like I had lost ALL my marbles. “Of COURSE Santa is REAL! But that guy’s trying to steal his identity!!”

And THEN you will NOT believe what the little brat did next! She reached out, grabbed my phone, and hurled it toward the parking lot! I went scrambling to grab my phone from the slush before it got run over by a car, and when I turned around, Brianna was already disappearing through the doors into the mall!!

The next time Brianna comes to me for help with something, she is on her OWN!!! 🙁

The mall was packed (OBVIOUSLY!) so by the time I pushed through the crowds and got inside, Brianna was nowhere to be seen. Of course, I figured she was headed for Santa’s Workshop, and that’s been in the same place since I was Brianna’s age.

For a munchkin with such short legs, Brianna moves FAST! When I reached Santa’s Workshop, she was already up on the little stage with Santa. The kid on his lap was just a toddler, so she didn’t seem to care that Brianna was barging in on her time, but the elves around Santa were all totally freaking out.

“This Santa is a PHONY!” Brianna announced to everyone waiting in line. “He is NOT Santa and I’ll PROVE it!!”

Then Brianna lunged forward, grabbed the guy’s beard, and PULLED!!!

Santa shouted out in pain, the toddler’s mom lunged forward to get her kid out of the chaos, and the beard didn’t budge!

That’s when I realized it wasn’t the same Santa we saw outside. This guy’s beard was…REAL?!!

Then Brianna started to cry. “I made a BIG mistake! You’re the REAL Santa!” she sobbed. “I’m SO sorry! I promise I’m not a naughty girl!!”

Fortunately, Santa was cool. He motioned for the elves to calm down, and he welcomed Brianna onto his lap. They spoke quietly for a few minutes, and she even got extra candy canes when she left.

“You’re probably right,” I said. And then we went to buy some BEE-YOOO-TEE-FUL jewels.  But now, whenever I see Santa Claus, I break into a cold sweat and hope it’s the REAL one!

Have you started your Christmas shopping yet?  What’s on your list?