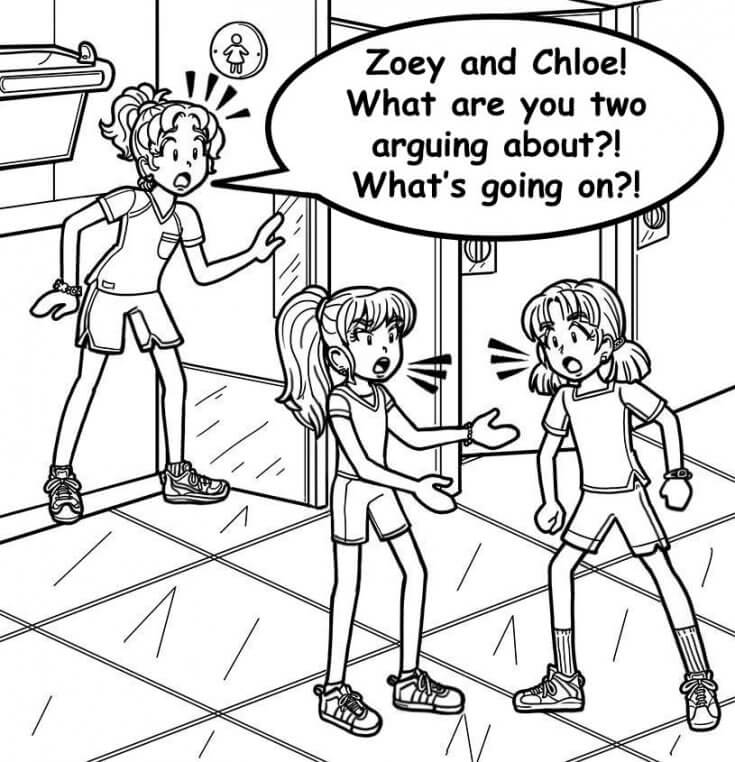 Chloe and Zoey have NOT been getting along, and it’s totally stressing me out!

My first clue something was wrong came when Zoey rolled her eyes. I mean, if she’d been rolling her eyes at MacKenzie or our gym teacher, that wouldn’t have been a big deal. But she rolled her eyes at Chloe! Just because she did jazz hands!!

Or not AT Chloe. More at me, but ABOUT Chloe, know what I mean?

I was SO confused that I didn’t say anything at first. I mean, Chloe does jazz hands, like, all the time! It’s her thing! It’s adorkable. Sure, sometimes it’s cheesy, but it’s just Chloe!

Then, later that same day, Chloe reached out and playfully grabbed a fry from Zoey’s lunch tray, and Zoey snapped, “Geez, get your own fries, Chloe!”

I didn’t know WHAT was going on. From the look on her face, neither did Chloe!

Later that afternoon, Zoey and I were messaging, but when Chloe jumped in, Zoey immediately said she had to go. But she’d JUST told me she was bored and had nothing to do!

Something was definitely UP. When I texted Zoey and asked, she said nothing was wrong, but the next day she was weird ALL OVER AGAIN.

During PE, Zoey kept giving Chloe the silent treatment.  It was SUPER awkward!  Then, when Zoey asked to be excused to use the bathroom, Chloe asked to go to the bathroom too. When they weren’t back after a couple minutes, I asked for my own bathroom pass. (Thankfully we had a sub who let us all go at the same time.)

When I got to the girls’ bathroom, I found Chloe and Zoey inside – YELLING at each other!! 🙁 🙁 🙁 I couldn’t tell what they were yelling about, but Chloe was CRYING!

“Oh sure!” Zoey grumbled. “You’re all worried about HER! Figures! I guess you two are such BFFs you don’t even need ME!”

And then she stormed out of the bathroom!!

Once Chloe had calmed down enough to talk to me, I asked what Zoey was so mad about.

“She said something about when we went ice skating!” Chloe wailed. “And how I didn’t invite her! But I DID!”

We had to get back to class, or even a sub would notice how long we’d been gone. As soon as class was over, Zoey sprinted out of there and we didn’t see her the rest of the day.

I couldn’t figure it out. Chloe had invited us both to go to Lake Placid with her family. The Olympics were held there a million years ago, so there’s a museum, but you can also go iceskating and sleigh riding and stuff. It sounded great, especially for Zoey since she’s so into history and that kind of thing!

But right after Chloe texted about it, Zoey texted to say her great-aunt’s birthday party was that weekend.

We were super bummed she couldn’t come, but we took lots of pictures and sent her texts. She never responded, but we figured she was busy with family stuff.

I looked back through the texts, to find clues why Zoey had gotten so mad. First, I realized Chloe’s text about the trip was ONLY to me! I mean, she wrote “Hey N & Z” at the top of it, so she THOUGHT she was talking to both of us, but she accidentally forgot to include Zoey as one of the recipients of the text. Which explained why I couldn’t find Zoey’s response about her aunt’s party in that conversation. I finally realized Zoey had sent that text separately, and it just happened to come in right after Chloe’s text about the trip.

So poor Zoey, left out and bored at her aunt’s party, was scrolling through her phone and saw a bunch of photos of me and Chloe ice skating, sleigh riding, drinking cocoa, and making heart fingers at the camera, all the while thinking she hadn’t been invited at all! No WONDER she was so upset!!

I waited until the next day, because this needed to be explained in person, with the texts to prove it all. It was our day to work in the library at lunch, and I knew Zoey wouldn’t let Mrs. Peach down, no matter how mad she was. When Mrs. Peach stepped out for lunch, I grabbed Chloe and we cornered Zoey.

“You two are going to listen to me!” I said in my fiercest voice. It’s the one I use when Daisy gets overexcited and forgets her potty training.

Zoey wasn’t QUITE as mad at me, so she listened, and she looked at the texts on my phone. Once she and Chloe realized what had happened, they both burst into tears.

“I’m SOOOO sorry!” Zoey cried. “I was horrible! My feelings were just SO hurt!”

“I’M so sorry, too!” Chloe wailed. “I totally meant to include you in that text! I’m SUCH a scatterbrain!”

Then we all did a group hug together, determined to put all of this behind us.

I hope that my two BFFs never, EVER fight like that again, because I am NOT cut out for this kind of stress!!