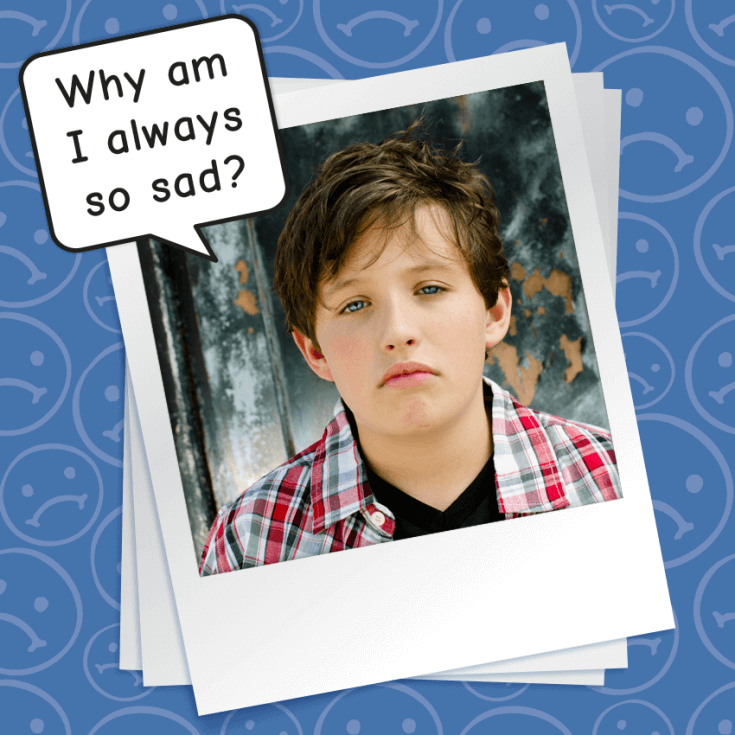 Hey Brandon. It’s like I feel sad ALL THE TIME. My friends keep asking me, “Hey, you ok?” and I just say, “It’s nothing.” The truth is, I’ve had some pretty sad things happen in my life. But, I still don’t want that to keep me from being happy for once. Any advice?

Down In The Dumps Dude

Hey Down In The Dumps Dude,

Thanks for reaching out and sharing how you feel. That’s a really tough first step. It sounds like you’ve had to deal with some really tough stuff in your life and I’m sorry to hear that.

Even without sad stuff happening, it’s very normal for tweens and teens to be moody. That’s partly because of wonky hormones, and it can make it tough to know when you’re feeling normal sadness/moodiness/hormone stuff, and when you’re really dealing with depression. It’s important to consider whether it might be depression though, because that’s a serious thing you shouldn’t deal with by yourself.

The thing is, depression isn’t just about your mood. Depression changes how you think. It makes it hard to notice or enjoy good things in your life. It sucks up the energy, motivation, and concentration you need for regular daily activities.

Here are some signs of depression that you should watch out for—and FYI everybody who’s reading this, just because you have a few of these symptoms sometimes doesn’t mean you’re depressed. It’s more if you have a bunch of them at the same time and they don’t go away for more than a couple of weeks.

So basically, if you’ve got several of these things going on and you just can’t shake it, you need to see a doctor. They’ll want to rule out anything medical – like sometimes you might be low on some vitamins and it’s an easy adjustment with supplements. But they’ll be able to assess if you’re depressed. And if you are, then they’ll suggest some further steps. They’ll probably include some of the following:

Basically, the thing is to reach out and get help. You’ve started by reaching out to me, which was an awesome first step. And now I’m telling you to reach out to an adult in your life who can help you figure out the next steps to take. Depression will tell you it’s hopeless, or you’re not worth the bother, but DEPRESSION LIES. Okay? You matter, you’re worth it, and you can feel better, with the right support!

Have you or someone you know ever felt so down that it might have been depression? What helped you or them feel better? Tell us in the comments!