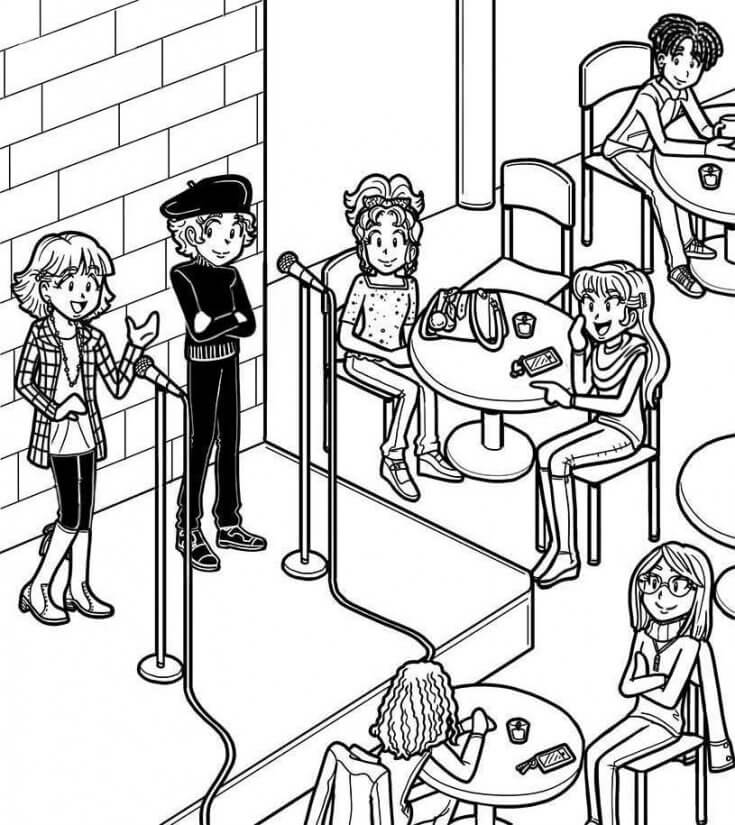 lt’s a new year! I’m trying to be open to new things! Which is why when Zoey told us about a slam poetry open mic, I didn’t immediately say, “ARE YOU FREAKING KIDDING ME?!!”

My mom got so excited when she heard. Apparently she did this kind of thing when she was in high school. Which did NOT up the cool factor, if you know what I mean. She even dug out this dusty old beret she wanted me to wear.

“I gave my best performances wearing this hat!” she said.

LOL. NOPE. Not like I was going to be performing anything anyway!

But Zoey was, and she was PUMPED. I didn’t even know Zoey wrote poetry! Even Chloe said she might perform something! I was starting to worry I’d look like a weirdo if I DIDN’T spout some poetry.

Zoey’s mom dropped us off at this seedy-looking café, and we followed signs to the basement. It was dark and windowless. Honestly, if someone wanted to have a creepy Halloween party, this was the perfect place!

But the only scary part was this super-talented girl at the mic, not much older than us, absolutely SLAYING on the stage. We’d missed the beginning of her poem, but clearly some guy had done her wrong and she was shredding him to pieces with her words. When she was done, I was pretty sure I would follow her into battle!

“Whoa,” Zoey said as we sat at a grimy little table off to the side.

Of course, the next three poets were…more what I was expecting. One was so quiet, we could barely hear him. (But everyone hooted and hollered when he was done. They were a supportive bunch!) One recited a poem about his baseball card collection, which was really just a list of players’ names. And one told the saddest story ever about her best friend dying. Only, at the end of the poem, we found out that her best friend was a HAMSTER.

Which wasn’t supposed to be funny. But I couldn’t stop giggling. I blame the incense fumes!

Then there was a break. People got up and served themselves coffee and stale cookies.

“You should go next,” Chloe said to Zoey.

But Zoey looked super-nervous. “I don’t know about this, you guys. They’re all SO GOOD!”

Chloe and I exchanged a look. “Um…did you hear hamster girl?” I said.

Then I felt someone tap my shoulder. I turned around and had that weird moment where you see someone you totally know, but you’re NOT expecting to see them, so it takes you a minute to place them. Also, he was wearing head to toe black. And a beret like the one my mom wanted me to wear.

Turned out Max was a regular at this open mic thingy. And when he heard Zoey was nervous, he suggested they go up together and do some sort of improv-duet. To me, that sounded scarier than going up alone to do something I had already planned! But Zoey followed him up to the mic.

The super supportive crowd hooted and hollered. Someone shouted, “Drop some knowledge, Crumbly!”

Max grinned. He looked totally at home. “So I was gonna do a new rap about being stuck inside a locker, but my friend Zoey is here, so we’re gonna do a little improv instead.  That okay with you guys?”

Everyone clapped and whistled. Zoey looked thrilled. I was terrified! Who makes up poetry on the spot? Or improvises raps, or whatever?!

Max took the mic and got things started.

“Yo, I’m Max Crumbly and I’m here to say
that everyone here is making my day.
Your beats, your rhymes, your awesome courage
warm my soul like a bowl of porridge.

Now, for Zoey here, it’s her very first time
to get on this stage and share some rhymes,
so she’s nervous, you feel me? But also brave,
with beats so sick, they’ll send you to your grave!”

This didn’t sound like a compliment to me. I mean…I know sick is a good thing, but I still wouldn’t want to kill anyone with a performance. But Zoey was ecstatic as she grabbed the mic.

I thought she’d keep rapping, like Max. But she went a WHOLE other way.

“I’m Zoey,” she said, in this tone of voice that made the whole room go silent.

“I’m love
and stars
and poetry in motion.

But Zoey didn’t even look like she heard her. She was in a ZONE.

“I build worlds
with words,
I heal pain
with love,
I lift up
my friends
and we soar together
to a place
where there is no hate
and there are no lies
and the sky’s
not even the limit!”

Everyone cheered and Max took the mic back. He said a few more rhyming lines to bring it all together, but I wasn’t even listening to him. I was looking at Zoey’s beaming face.

I still wasn’t going to get up there and recite a poem. But Zoey had inspired me FOR SURE. And who knows what’ll happen the next time we go to a poetry slam… I might just have to dust off my mom’s beret, get up on that stage, and recite poetry too!

What’s the bravest thing you’ve ever done that nobody knew you could do?  Share with us in the comments!