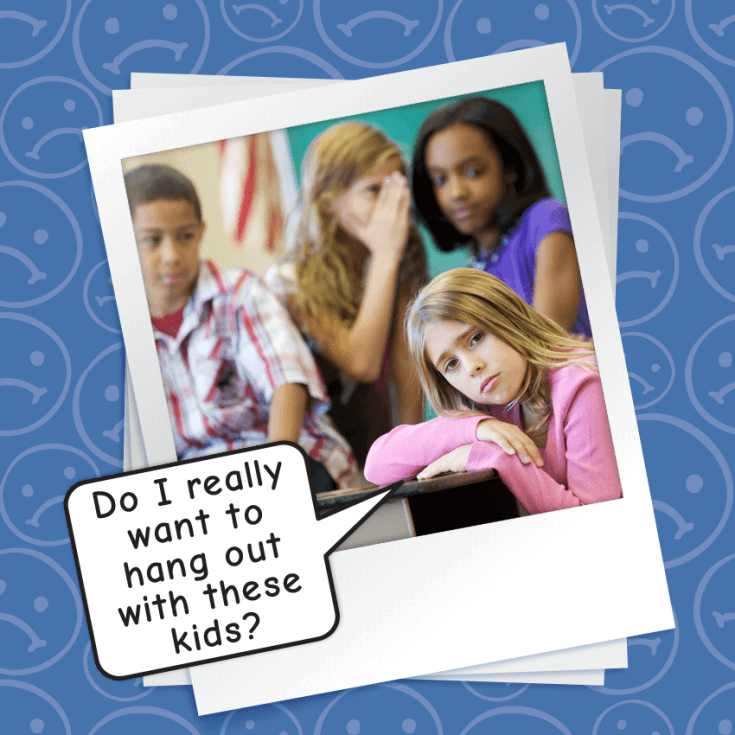 With one group of my friends, I like doing daring stuff and reading scary stories. But with another group of friends, they are so chicken and don’t like daring stuff or scary stories (they think that “baby books” are fun). I try not to judge so that I can fit in with both groups. But I feel like I’m lying to one in order to be cool to the other. Help!

Look. If it helps, I don’t think you’re two-faced if you have two groups of friends and you do different stuff with each group.

You’d only be two-faced if you presented yourself one way, but then you acted another way around other people. Like if you gossiped with the group who likes scary stories about the other group and acted like you’re not friends with them. Or if you said to the non-scary group, “OMG, I totally hate scary stories!” but then you enjoy them with the other group. That would be two-faced.

What worries me, though, is that you call the one group “chicken” and say they like “baby books.” I kind of wonder why you’re still friends with them, because it sounds like you don’t respect them a lot. Maybe you’ve grown apart. That’s totally normal and okay. It can be hard, but it would be better to stop hanging out with them than to hang out with them while judging them. Because you said you don’t mean to judge, but…your letter sounds a little bit judgemental, to be honest.

There’s nothing wrong with being into scary stories…and nothing wrong with disliking them. And if someone dislikes them, it’s cool that they know their limits and don’t just go along with scary stuff and then deal with nightmares or something later. It’s not about maturity. There are adults who don’t like scary stuff either. It’s just personality types.

And as for “baby books” – I’m sure you don’t mean actual baby books, like board books or whatever. You probably just mean books you think are for a younger level than you are. Nikki and I both get a lot of emails asking things like “Is it okay for me to like this show/book/toy? Because I worry I’m too old for it!” And the thing is, people should enjoy what they enjoy!

If you don’t enjoy the same things that one group of friends enjoys, that’s cool. People enjoy different things. But don’t pretend to be into something you’re not. AND don’t judge other people for what they’re into.

So if you’re still friends with that group because you actually like the people, then try to let go of the judgment about the things they’re into. But if you’ve grown apart from them, be honest about that. It might just be time to move on. It doesn’t mean you have to cut off contact with those friends. You might just start spending more time with the other group of friends.

Wherever you are, you don’t have to act like someone you’re not to fit in. Be true to yourself—and that might mean expressing one side of yourself with one group, and one side with another.

Hey readers, do you act differently with different groups of friends? Does it make you feel two-faced? Tell us about it in the comments.