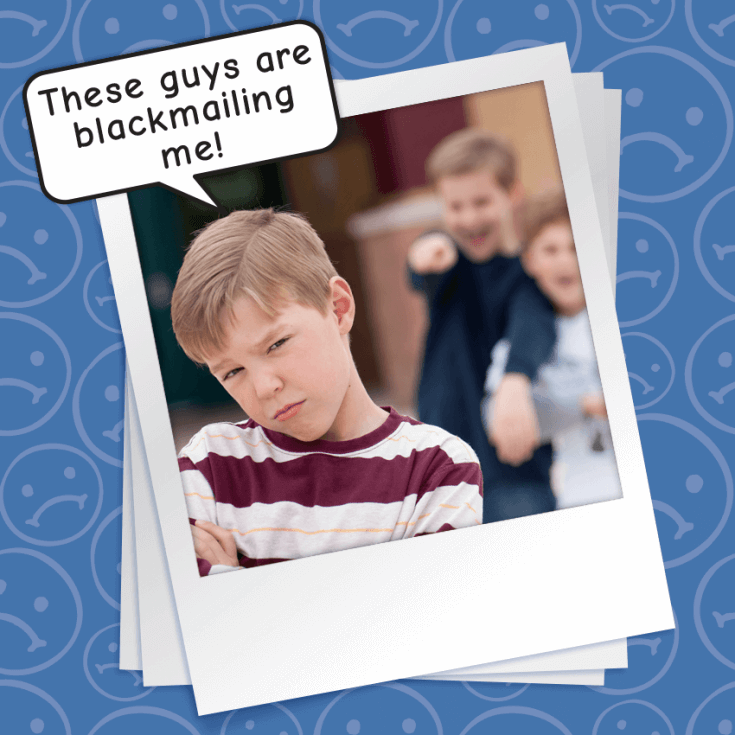 I consider myself a friendly, caring dude with a variety of nice friends. But the jocks want me to ditch my friends and hang with them instead. Well, they overlooked one very minor detail…I DON’T WANT TO! They’re rude and always discriminating against people. Personally, I think that’s JUST WRONG! But, they said that if I don’t join them, they’ll spill the beans about my humiliating secret! Brandon, what the heck do I do know?

Okay, this whole situation is SUPER messed up!

I’m glad you’ve got a variety of nice friends. And I’m glad you can see that the way those jocks treat other people is not okay. (Though I’m guessing it’s one particular group of jocks, since there are plenty of friendly athletes.)

But it’s super messed up that anyone would try to blackmail you into being their friend. Because that’s what it sounds like! I mean, I’m sure you’re great, but why are they even messing with you? Why not leave you to your group of friends, and they could just mind their own business? I’m sure you’re wondering the same thing.

The blackmail piece is what makes this a tough situation. Because otherwise you could just carry on with your friends and ignore the jocks. But they’re holding something over your head.

Let’s imagine what would happen if you decide to go along with them, so they don’t spill your secrets. What will happen next? I mean, you’re only going to be a part of the group because you were blackmailed into being there. So…that sounds like it would be tough to actually be friends with anyone. Won’t you resent them? And they’ll have power over you.

Plus, they’ll keep blackmailing you, even when you’re a part of the group. They’ll just keep using this embarrassing secret to get you to do stuff you don’t want to do. It might be even worse than whatever secret they’ve got on you!

So I think you might have to call their bluff and be prepared to face the consequences. There’s a chance they won’t actually bother spilling the beans. Maybe they’ll have moved on to torturing someone else. But let’s be honest – they sound like jerks. So there’s a solid chance they will.

If there’s someone who will be particularly hurt/upset/angry by whatever this secret is, I think the best move might be to go directly to that person and confess. Give them a heads up that the secret might become public, if it could be embarrassing to them, too.

However, if the embarrassing secret is only about only you, try to remember that the more chill you are about it, the faster it will blow over. And it sounds like you’re a well-liked guy with good friends. Hopefully most people whose opinions matter to you will see the jocks as jerks for trying to mess with your reputation.

You might just have to face the consequences for this secret thing. But whatever they are, they probably won’t be as serious as the consequences you’d end up facing in the long term if you get in deeper with this group of horrible guys.

Have you ever been blackmailed? How did you handle it? Tell us in the comments!