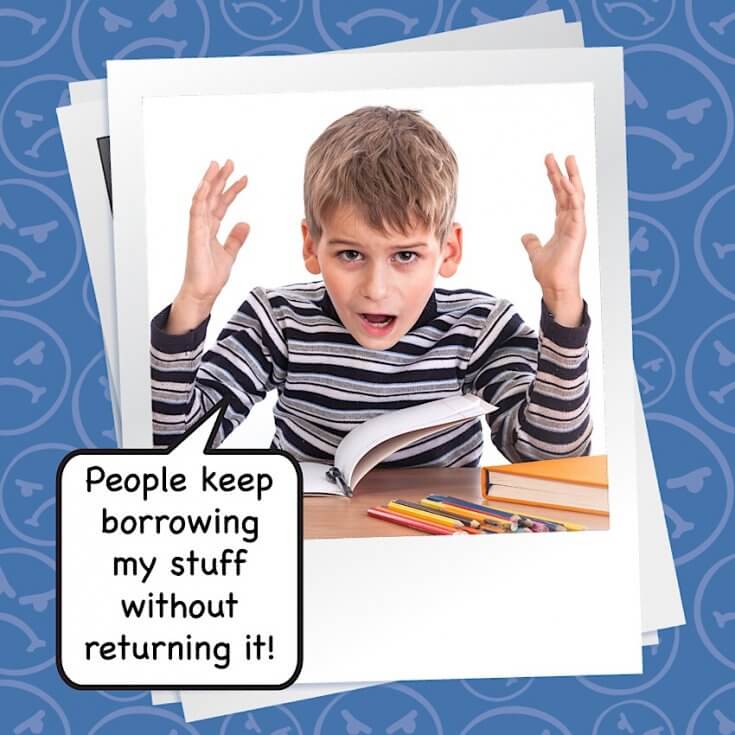 Hey Brandon,
I love having my own school supplies so that I don’t need to ask the teacher for anything or take turns using supplies with other classmates. But, now I have a new problem—people keep borrowing my stuff without returning it! It really gets on my nerves, but I’m a nice person and I don’t like to say NO. Still, sometimes I feel like some sort of school supply store—except I’m giving it all away for free!

Hands Off My Stuff

Hey Hands Off My Stuff,

Okay, I totally understand how annoying it is to have people constantly “borrowing” your stuff, especially if it’s always a one-way street and you’re never borrowing from them. Or much worse—they don’t return the stuff they borrow! There’s this one volunteer at Fuzzy Friends who ALWAYS asks me for gum. NEVER has her own. And I’m like, “Dude, you’re the adult! Buy a pack of your own gum!”

Buying your own stuff can get pretty pricey. So, you’re really lucky that your family can buy you this stuff. I don’t mean to shame you, like “You should be grateful!” I’m just trying to make a point. For some people, school supplies are just a basic necessity, like shoes or food, and obviously their parents will buy them. But for others, it can be tough to afford.

Or, maybe they believe the school should be providing the stuff. Whatever…the point is not buying the stuff was probably the parents’ choice. So, why should YOU be responsible for what some other kid doesn’t have?

So, it’s irritating, for sure. But the kid next to you just needs a glue stick and probably feels embarrassed about always having to ask the teacher.

I think the best approach is figuring out how to change your own attitude about it, rather than trying to change other people’s actions. Maybe realizing how they feel about not having stuff of their own will help, especially if the reason they don’t have stuff is because their families can’t afford it.

I wonder if it might help if you have a few special items that are just for you that you don’t lend out—special pens you love or whatever—and then you consider the rest of your stuff a lending library. Since this school year is nearly over anyway, just try to get through it. And then when you’re getting supplies for the next school year, maybe ask your parents if you can buy some extra supplies since you do so much lending out. If your family can afford it, your parents might really appreciate your generosity.

Otherwise, the only way to stop people from asking to use your stuff is by telling them you’re no longer lending stuff out, since people don’t return whatever they borrow and you’re running out of supplies. Hopefully if you look at it that way, you won’t feel as bad about saying no.