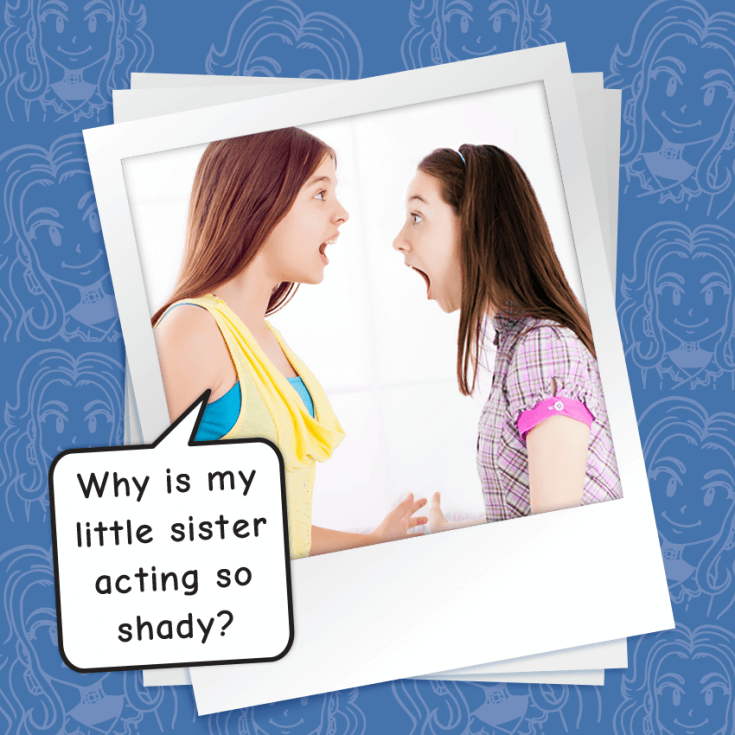 My younger sister and I used to do everything together. But ever since she started middle school, she’s been acting snobby and selfish. She also fights with me a lot. Once I asked her to play Uno with me and she was all like, “Ugh, you’re SO lame!” She even flirts with boys and plays with her hair in front of them. WHAT has happened to her and WHY is she acting like a MacKenzie wannabe?!

I admit that I don’t have a sister. Or any siblings. But maybe that’s a good thing, since this question gave me an excuse to call Nikki and get her opinion as a girl with a little sister. So thanks! 🙂

Anyway, I think a lot of this is about growing up and figuring out what it means to change, whether you have siblings or not.

Sometimes, we feel like we want to be more grown up than we actually are, and it happens a lot in middle school. So we try to act older in ways that we think are mature but really aren’t. It’s WAY more immature to call someone “lame” for playing a card game than to just play the card game. But for some crazy reason, saying that makes your little sis feel more grown-up.

That’s why you’ll see 10-14 year olds rejecting things they enjoy doing, watching, or playing since they worry about being too immature. But you’ll also see lots of teens or college students embracing those things again, like carrying cartoon character lunch boxes, watching “kiddy” shows, dressing up for Halloween, etc. At a certain age, that insecurity about seeming immature goes away.

It’s nice that you’re actually older than she is. Because I’m sure some younger siblings deal with this when their older siblings are suddenly acting like they’re sooooo much more mature. And if you’re younger, you might even believe they really ARE so much more mature.

But as an older sibling, you can relax a little and know that your sister is basically playing pretend. She’s testing what it’s like to act like this. Maybe she’s trying to grow up a little faster, because being older seems more exciting. Soon it will go away, and you will get back to being sisters who have fun together.

Until then, show her what it means to REALLY act grown up and mature. The next time she says, “You’re SO lame,” then just shrug and reply, “No, I know how to lighten up and have fun.” And keep having fun, being confident in doing what you enjoy without belittling other people. She’ll learn from your example eventually.

I hope this is helpful. Maybe our readers have something to add in the comments. What do you consider mature or immature?