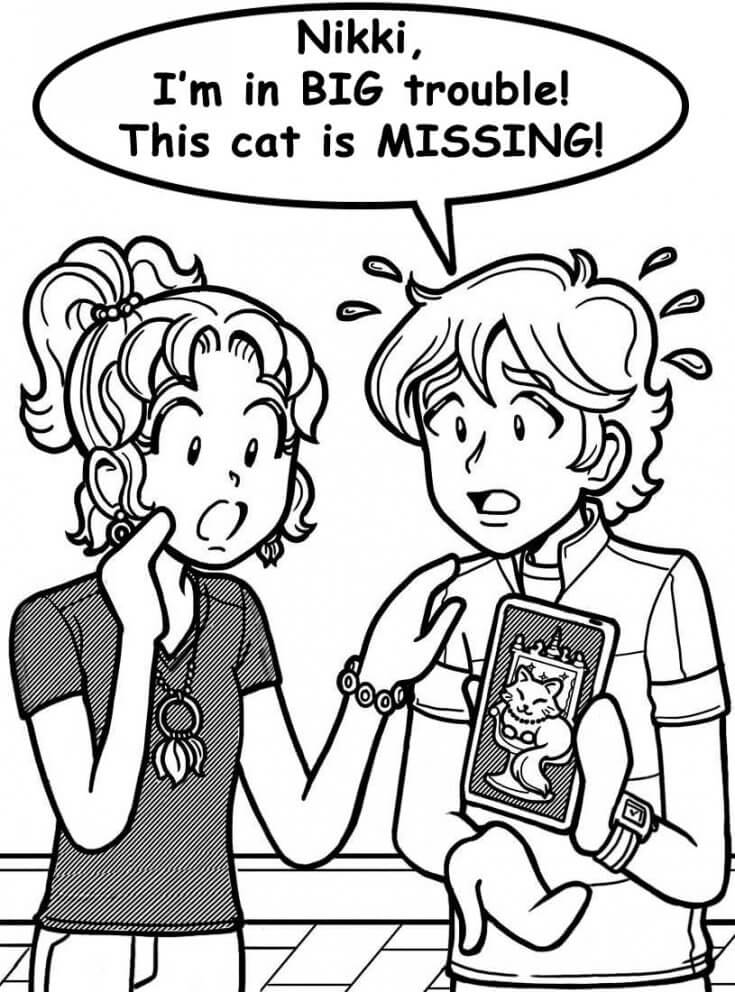 When I got to Fuzzy Friends, everything seemed totally normal.

Brandon’s grandma waved to me from the front desk, where she was helping a happy family with adoption paperwork. A couple of college-age girls were peering into the cat cages and cooing at their favorites.

“Brandon’s in the back, dear!” his grandma called.

I made my way to the back. Usually when I volunteer at Fuzzy Friends, I sweep the floor or walk dogs. Sometimes, I even carry cats from their cages to the little rooms where people meet them to see if they’re a good fit.

I hardly ever go in the back.

As soon as I got back there, Brandon said, “Nikki, I’m SO glad you’re here!

He was totally excited to see me! But I didn’t even have a chance to be excited about that. He grabbed my arm and dragged me into a corner.

“You have to help me!” he pleaded.

That’s when I noticed the wild look in his eyes. “Brandon, what’s wrong?!”

He pointed to a cage behind him, like it would answer all my questions. But it was empty. That’s when I started to worry that something was wrong. With BRANDON!

I tried to talk calmly, so I wouldn’t startle him. “Brandon…there’s nothing in there.”

“I know!” Clearly, talking all calmly didn’t work. He started pacing the floor. “I’m going to be in SO much trouble! I’ve let my grandparents down! And I’m really worried about Esmeralda! Where is she?!”

I made him sit down and got him a glass of water. “Brandon, I can help you, but you have to tell me what’s going on. Who’s Esmeralda?”

He pulled up a picture on his phone and showed me the fluffiest, most regal looking cat I’d ever seen—maybe because it was literally sitting on a THRONE.

“I didn’t know you guys did boarding!” I exclaimed.

“We don’t! But her pet sitter needed emergency surgery, so my grandparents made an exception, since Esmeralda’s owner has been so generous.” He buried his head in his hands. “I only turned my back for one second!”

I was finally starting to understand. “Esmeralda escaped?”

Brandon nodded. “I can’t find her ANYWHERE. And she’s not an outside cat! If she got out of the building, I’m SO DOOMED. Mrs. Watson-Butterbottom will stop paying the rent on the building and Fuzzy Friends will have to close!”

“Okay, let’s just think. Where could she have gone?”

I started listing places, but Brandon had already checked everywhere inside.

“Okay,” I finally concluded. “You stay here in case she comes back. I’ll go look outside!”

My plan was to slip out the back door so Brandon’s grandma didn’t wonder why I was leaving so soon. But when I opened it, I came face to face with Brandon’s grandpa—and an enormous Labrador retriever!

“Oh Nikki, thank goodness,” Brandon’s grandpa said. “I was supposed to be walking Peanut here, but my back pain has flared up something horrible. Think you could help me out?”

He held out the leash, and what was I supposed to do? Say no to this old man doubled over in pain?!

So I took Peanut and began to walk slowly around the premises of the building. I knew that having a dog with me was probably NOT going to help me catch a frightened cat.

But it turned out, Peanut was VERY helpful in helping me FIND a frightened cat! (He may have done most of the frightening…but still!)

He was sniffing around a bush and I figured he was looking for a place to pee when I heard a surprised yelp out of Peanut and then a white, yowling blur flew out of the bush and rushed past us.

Peanut and I both whipped around and watched it go, and next thing I knew, this giant white cat was perched on top of the Fuzzy Friends van.

Peanut barked and happily wagged his tail like, “Hey! Look what I found!”

“Good job, Peanut!” I cheered, and gave him a quick massage behind his ears.
I texted Brandon to come outside, since I didn’t want to bring Peanut any closer to the van and I didn’t want to let Esmeralda out of my sight.

Once Esmeralda was back in her cage and Peanut rewarded with a special bone, Brandon gave me a big hug and said, “You’re a life saver, Nikki Maxwell!”

I blushed and replied, “It was Peanut, mostly. But I’m happy I could help!”

And then I totally FREAKED and went, “SQUEEEEEEEE!!” However, it was inside my head, so nobody heard it but me! 🙂

What’s the most helpful or heroic thing you’ve ever done? We’d love to hear your story! Give yourself some credit in the comments!