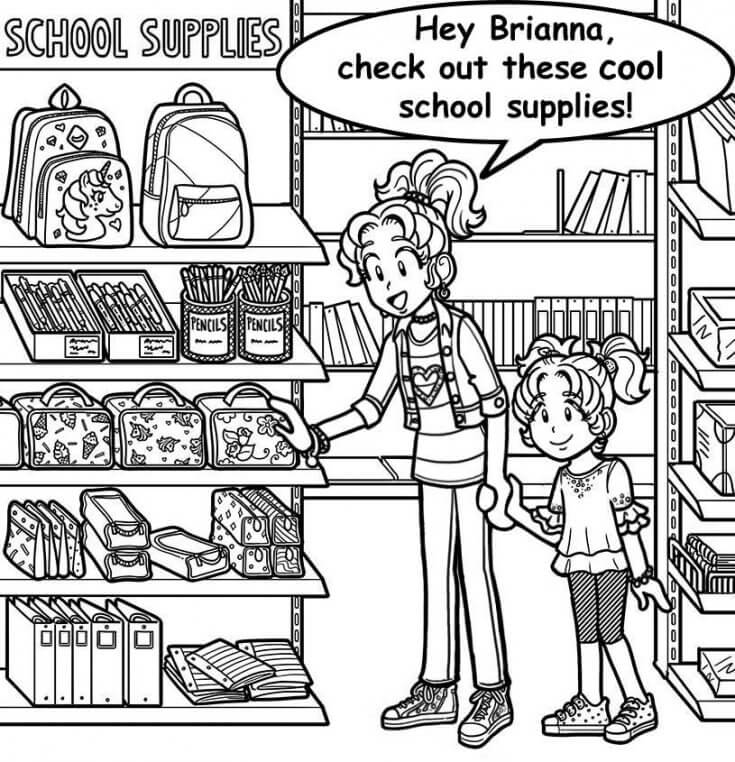 This morning, my mom said that she was taking me and Brianna shopping. Which was fine by me because I haven’t been shopping in AGES. What she failed to mention is that when she said shopping, she actually meant SCHOOL SUPPLY shopping!

And to make matters worse, Mom just dropped us off at the office supply store’s entrance with our lists and some cash! That meant that I was responsible for Brianna, which meant TROUBLE!! 🙁

“Come on,” I said as I grabbed her hand. But she struggled against my hold and then she bit me. Yes, she BIT me!

“Fine,” I said as I dropped her hand. “But you have to stay with me the entire time we’re in the store. Got it?”

She nodded her head and then obediently followed me into the store.

“Can I interest you in a raffle ticket?” a sales clerk asked.

“Waffle tickets?! I LOVE eating waffles for breakfast!!” Brianna exclaimed as she excitedly raced towards the sales clerk and his little blue slips of paper. Then she grabbed one, shoved it into her mouth, and spit it out on the floor. “Eeewww! Hey mister, this waffle ticket tastes NASTY! Maybe it needs a little syrup…”

“Brianna! It’s not a waffle ticket, it’s a raffle ticket! Now pick that up!” I scolded. Then she picked it up, placed it in her pocket, and stuck her tongue out at me.

I reached out and grabbed her hand and then guess what? SHE BIT ME AGAIN!!

The sales clerk grimaced. “Did your sister just…bite you?!”

I just smiled in response. I don’t think he would understand how common Brianna’s antics were.

“Miss, are you interested in a raffle ticket? You could win a two-hundred-dollar gift card to this store!”

Now that definitely had my attention!

With all of that money, I could buy an entire new set of art supplies! Or, I could buy one of those fancy art tablets that I’ve seen people with. I might even have enough left over to buy a leash and muzzle for Brianna!

I looked all around me, but she was nowhere to be found!

“Excuse me a moment,” I said to the worker. “I’d love a raffle ticket, but I’ll be right back!”

I searched around, but the area was empty! Then I heard laughter. It was unmistakably Brianna!

I whipped around just in time to see her duck behind a nearby pencil display case. As I approached, she quickly scurried across the store. It was like she wanted to play hide and seek AND tag, but in an office supply store!

“Catch me if you can!” she giggled.

I set off after her, but I somehow lost track of Brianna when a family pushed their three cartloads of school supplies between us.

I caught sight of Brianna again near the entrance of the building. Which was definitely NOT a good thing. But as soon as she saw me, she darted off again.

I tried my best to keep track of her, but the SAME family walked in front of me again!

By the time they FINALLY ambled past, Brianna had disappeared. I walked over to the furniture section and sat down in one of the comfy office chairs. I couldn’t believe that I had LOST her! And to make things worse, it sounded like someone was laughing at me.

Then I listened closer. The laughing wasn’t fake, it was real!

I quietly stood up from my chair and began walking around. The sound of giggling grew louder and louder until…

I pulled open a cabinet door and out tumbled Brianna!

She had such a severe case of the giggles that I couldn’t even be mad at her disappearing act. I was just happy that I finally found her!

“Come on Brianna, we still need to get our shopping done,” I said as I held out my hand. Brianna looked at my outstretched hand before smiling. She slipped her hand into mine.

And she DIDN’T bite me this time! THANK GOODNESS!! 🙂

We quickly got our shopping done. It went a lot faster with the both of us working together. I texted Mom saying that we were almost done as the cashier rung us up.

“May we have your attention, please!” a loud voice boomed on the intercom. “We will be announcing the winner of the raffle prize in two minutes.”

I had been so distracted chasing Brianna around the store that I never had the chance to enter the raffle!

I looked down at Brianna and couldn’t help but feel a little angry at her. It was HER fault that I didn’t have a chance to win the prize!

So, I grumpily paid for our supplies and headed towards the exit. I wanted to see who won, so Brianna and I stood in the crowd.

“Ladies and gentlemen, the winner of today’s raffle is ticket number 1806,” the intercom announced.

There were mutters from the gathered crowd, but nobody stepped forward.

“I hope I won!” Brianna said. Then she dug into her pocket, took out her soggy, chewed up ticket and waved it in my face.

As I caught a glimpse of it, my heart nearly LEAPT out of my chest!

BRIANNA HAD THE WINNING TICKET!!

I did my Snoopy Happy Dance as Brianna went forward to claim her prize!

“Here, Nikki. This is for being such a good big sister,” Brianna said as she handed me the gift card. “Now you can buy that art set you wanted!”

I scooped her up and gave her the BIGGEST hug ever!

I guess that Brianna isn’t always such a brat after all!! 🙂

Have you gotten all of your school supplies yet? If so, is there anything that you still need? If I were giving away FREE school supplies, what would you ask for? Hey, you never know! It could happen! 🙂