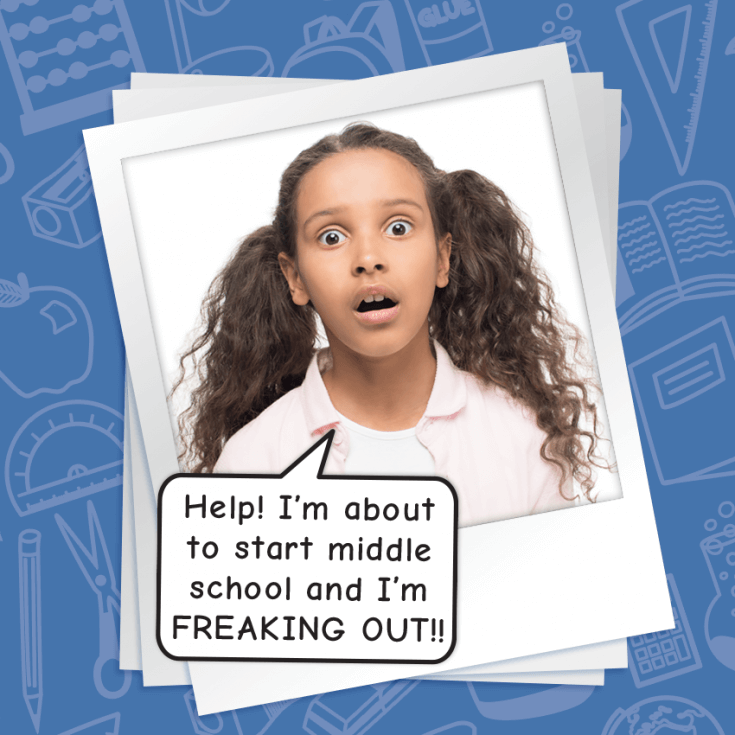 I’m a girl starting middle school and I’m trying not to FREAK OUT!!! I’m not so sure I’m going to survive! I hear that middle school is dramatically dramatic drama! I need answers and advice. HELP!!!

Okay! First of all, take a deep breath. 🙂

Partly, as we move into middle school, our hormones are starting to go bonkers. Bodies are changing, etc., etc. I’m sure you learned all that during an uncomfortable lesson on puberty in fifth grade. And all those bonkers hormones can be the source of some of the drama.

And it’s a lot of pressure to feel like we have to suddenly be so much older and more mature, but we’re really not any different than when we graduated from elementary school a few months earlier. I think some people respond to that pressure by trying to ACT older in ways that just create…well, DRAMA.

So, these are some of the REASONS for that drama. What do you do about it?

I think it helps to remember that you (and your friends) are no different than you were a few months earlier. You’re the same awesome people—with added pressures, yes—but that still doesn’t change how awesome you are.

You don’t automatically age out of the stuff you enjoyed doing in elementary school, so try to keep doing what you like. Plus, your friends will still be your friends. (Assuming you’re going to the same middle school with them.) So, stick with your friends and try not to get caught up in the drama amongst yourselves. A couple really good, reliable friends are probably the most important thing to survive middle school drama.

Also, a lot of your nerves might have to do with uncertainty about what to expect. If you have older siblings, you might have some idea, but if not, you’re probably basing most of your expectations on TV and movies. (Remember, TV and movies require drama or else they’re boring!) And if you DO have older siblings, you might be basing your expectations on their experience. But, keep in mind that just because they had a certain experience in middle school doesn’t mean that’s what your experience will be like.

So if school hasn’t started yet, take some time to look through your new school’s website. Read announcements and rules. There might even be a map/floor plan on the website. If it’s possible, go walk through the school before it’s filled with students. Go to whatever new student orientation is provided. Ask a parent to explain how to use a combination locker, if you’ve never used one before. Feeling comfortable and confident with these sorts of things will make it easier to handle whatever other drama might come your way.

Also: think about all the awesome things about middle school. Changing classes means that if you don’t like a class or teacher, you only have to be with them for an hour each day, instead of six hours like in elementary school. Most middle schools have students from a variety of elementary schools, so there’s potential for new friends and crushes! Middle school also usually has more clubs, extracurricular activities and events like dances, which could be a lot of fun.

Sometimes a little focus on the positive will help keep me from freaking out. I hope it helps you, too.

Have you started attending middle school yet? Is it as much drama as you thought it was? What are your best tips? Tell us in the comments below.