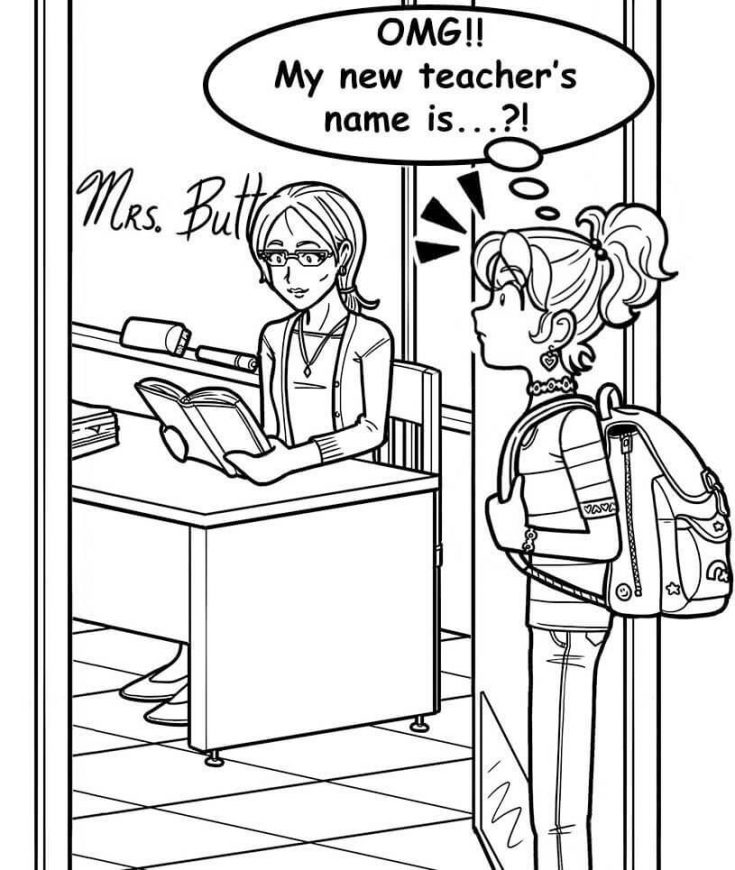 OMG, things have been KA-RAY-ZEE but I am finally getting a chance to write about what happened on the first day of school!!!

So I got my schedule and everything was what I expected, except that I was expecting Mr. Hopper for English, and instead there was an unfamiliar name. Well, Mr. Hopper was about a million years old, so I figured he’d retired and there was a replacement teacher.

I assumed the class would be in the same wing as all the other Language Arts classes, but when I got there and couldn’t find it, I realized it was way out in the portables at the back of the school. Makes sense—new teacher gets stuck in the boonies.

But at this point the bell was about to ring. I didn’t want to be late! So I ran, but then I got stopped by Principal Winston!

“Miss Maxwell! You are late to class!”

And then he said, “No running in the halls! Please show the civilized decorum one expects of a Westchester Country Day student.”

However, if I argued, I was going to be even later to class, plus I’d probably end up with a detention! “Sorry, Principal Winston,” I sputtered.

He sniffed, nodded and moved along. I waited until he turned a corner and then I kept running.

But of COURSE I was late when I finally reached the portables and burst into the classroom. Everyone turned to look at me, including the stern-looking teacher at the front of the room.

I fought to catch my breath and looked at the marker board behind her which said—I’m not even kidding—Mrs. Butt.  “I’m sorry I’m late, Mrs. Butt,” I stammered.

Some of the students started snickering and whispering, but I couldn’t understand why. I mean, that WAS her name, wasn’t it?

She shot me a dirty look. “Is that supposed to be funny, young lady?” she fumed.

I mean, it kinda was funny! But it wasn’t MY fault that was her name! I gestured to the board. “I was just…”

“Being disrespectful,” she scolded, pulling out one of those pink slips teachers write on to send you to the principal’s office!!! And I’d already had one run-in with Principal Winston on my way to class!!! 🙁 !!

“I don’t have time for this nonsense. You can explain yourself to the principal,” my teacher snarled.

Before she could finish filling out the slip, there was a little knock at the door and another teacher popped her head in.

“Hi, sorry to interrupt! I just wanted to say a quick hello and let you know I’m Mrs. Green. I’m right nextdoor. Let me know if you need anything, Mrs….”—she looked at the marker board—“um…Mrs. Butt?”

My teacher immediately turned around and stared at the marker board, and then faced Mrs. Green. Her cheeks were tomato red!!!

She disappeared. I waited. Would this embarrassing moment with Mrs. Green make her even more mad?! Hey, it wasn’t my fault she was the one blocking the board to make her name look like “Butt” when it was really “Buttrick!” Plus, teachers have a really bad habit of overreacting and completely freaking out over nothing!

“I’m soooo sorry!” I apologized profusely. “I couldn’t see your whole name! I was just reading part of it!”

Mrs. Buttrick took a long, deep breath. Then she looked down at the pink slip and ripped it up. “Actually, it was my fault and I apologize, Miss Maxwell. Obviously that was an easy mistake to make. How about we forget the tardy as well? Have a seat.”

Before she began class, she erased her name from the board and wrote it again in the top right corner in really big letters where NOTHING could block it.

So that’s the story of what could have been the WORST first day of school in my entire life!!! Remind me to bake some cookies for Mrs. Green. You know, the teacher who also called her Mrs. Butt!!! 🙂

What’s the craziest thing that’s ever happened to you on the first day of school? I’d love to hear your wacky stories below!