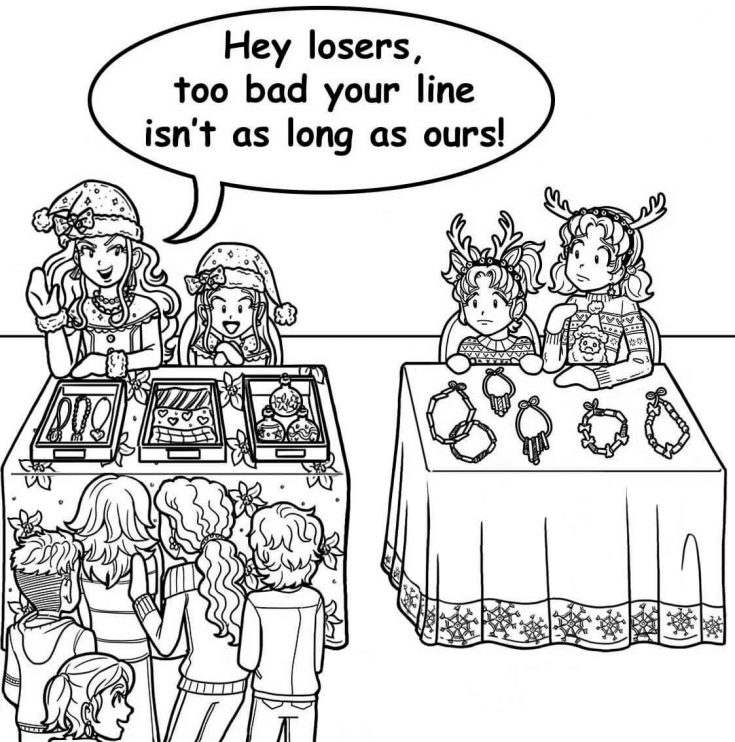 When I agreed to take Brianna to her dance school craft fair, I did NOT know I was agreeing to sit at a booth with her and try to sell her macaroni necklaces! And I DEFINITELY did not know we’d be competing against Mackenzie and her little sister!!!

To prepare these 6-year-olds for the cutthroat world of dance, their dance school had set it up so the craft fair was a competition—whoever raised the most money for the school would get to be the head snowflake in the holiday recital!

So, we got there and Madame FuFu showed us to a card table that was apparently our booth. She plunked a cardboard box on top and told us these were Brianna’s crafts, dropped off by my mom earlier. Then she glided away to help someone else!

I opened the box and pulled out a tangled mess of broken macaroni on a string. Brianna beamed. “We’ll sell them for $100 each! I’ll definitely win!” she chirped.

Suddenly, in waltzed Mackenzie and Amanda Hollister, followed by some servant hauling trunks of stuff. Mackenzie and Amanda were both wearing super cute Santa hats and dresses. They started setting up RIGHT NEXT TO US! Within minutes, their booth looked like one of those fancy department store windows in New York City! Spread out on their table were hand painted glass ornaments, silk scarves, and elegant jewelry.

Someone else’s mom came up to their booth and rolled her eyes. “Everything is supposed to be handmade by the dancer,” she said.

“It is,” Mackenzie replied, batting her fake lashes. “My sister is extremely talented. Twenty percent off to our first customer!”

The woman paused. Then picked out two scarves, three ornaments, and an emerald necklace!!!

Brianna turned to me, her lip starting to tremble. Even she could see her macaroni jewelry was no match for MacKenzie and Amanda’s table. “Maybe we should sell them for $50 each instead,” she muttered.

Soon Amanda’s booth was SUPER CROWDED. On the bright side, they would sell out really fast and then we wouldn’t have to see their smug faces anymore! Except right when that was about to happen, they wheeled in another crate of stuff and Mackenzie called out, “New shipment! More of Amanda’s handmade creations have arrived!”

It was SO NOT FAIR! Mackenzie and her family were basically BUYING the head snowflake part for Amanda!!! 🙁

I had to do SOMETHING. I found some drawing paper in the corner and dug some markers out of my bag. I quickly drew an adorable (if I do say so myself) cartoon of Brianna and hung it on the pole next to our table. “Cartoon drawings while you wait!” I called to the crowd of people waiting for their chance to look at Amanda’s table. A few curious people turned our way.

“That’s really good,” one dad said. “Are you selling them?”

I paused. Everything sold was supposed to be made by the dancer. “Free drawing when you buy a necklace for $10!” I said.

He tried not to laugh when he saw the pile of macaroni necklaces. “Okay,” he said. “Can you draw them?” He handed me his phone. It showed a photo of two little girls.

Soon I had a line nearly as long as Mackenzie’s. I tried not to sweat when Madame FuFu came along and watched me draw. “You can’t sell those!” she huffed.

“I’m not,” I told her. “They’re free with one purchase of Brianna’s necklaces!”
She gave a curt nod and then went over to Amanda’s table.

There was no way we were making enough money to beat Amanda, but Brianna’s masterpieces were flying off the table and Mackenzie’s head was about to explode, furious about the attention Brianna and I were getting.

When things finally died down and we all turned over our earnings to Madame FuFu, she marched to the platform at the front of the room. “I would like to thank all our dancers for their hard work today,” she said. “I would like to give a special thank you to Amanda Hollister, whose sales earned $965 for our dance academy!”

Amanda and Mackenzie jumped up and down while everyone else clapped politely.

“However,” Madame FuFu went on. “As confirmed by the deliveryman from Macy’s Department Store, their goods were not handmade by Amanda. Which means that the role of head snowflake in our holiday recital will go to our second place earner, Brianna Maxwell!”

So now my hand is cramping from all that drawing and I better rest it up, because Madame FuFu told me I can sell more drawings in the lobby of the dance recital and this time keep the money for myself! Which is sure to make Mackenzie’s head explode a second time! Win-win!!! 🙂

What’s something you’re super-talented at? Have you ever worked on a fundraiser like this for your scouts, dance, team, or other organization? How did it go? I’d love to hear your comments below!