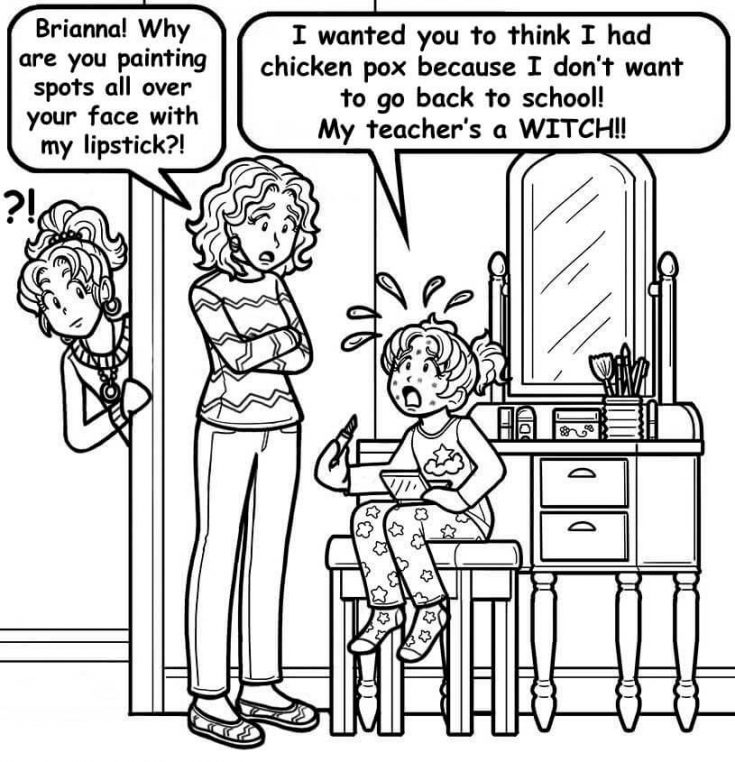 For the past few days, Brianna has totally been FAKING SICK. Believe me, I should know. In case you haven’t read my first diary, I’m a pro at this fake sick stuff. Seriously, I make one MEAN bowl of fake vomit!

So anyway, Mom caught Brianna using her red lipstick to make fake chicken pox on her face. That’s when the truth came out about why she’d been faking.

Apparently, Miss Pringle was the long-term sub in Brianna’s classroom since her regular teacher was out for the rest of the week because of her new baby. The first couple days Miss Pringle had been in her classroom, Brianna liked her. She told Brianna she was “a very special little girl.” (LOL!! Yeah right, if you’re not related to her!!!)

“Sophia was classroom helper last Monday, and the next day she was absent! She hasn’t been back ever since!”

“The next day Noah was classroom helper, and then he threw up at lunch!”

“Um, doesn’t Noah have gross-out contests with whoever can bring the grossest food and eat it in front of everyone?” I asked.

“And the next day Isabella was classroom helper and the day after she came to school with the WORST. HAIRCUT. EVER!!!!”

Mom and I glanced at each other. That one couldn’t really be debated.

“I’m supposed to be classroom helper next!!” Brianna sniffled.

I could tell Mom was about to argue that Miss Pringle wasn’t a witch and that witches don’t exist. But Mom could do it until she was blue in the face and Brianna would STILL believe they do, just like the boogieman in her closet.

So, that’s when I decided to take matters into my OWN hands.

“Look, Brianna,” I said. “You can’t hide forever. And even if you could, she’s just going to keep cursing the rest of the kids in your class.”  I ignored the death stare Mom was giving me.

“Someone has to stand up to her to STOP HER! You see her for what she really is, so I think it should be you.

“What?!” Brianna and Mom both yelped at the same time.

I shrugged, like it was SO obvious. “Chocolate! It’ll protect you and your classmates, AND it’ll take the witch’s power away so she’s just a nice substitute again. Follow me!”

I led them to the kitchen, climbed the stepstool to reach into the highest cabinet and pulled out the bag of Hershey’s Kisses that I knew Mom kept stashed there. She scowled.

“You take this bag to school,” I instructed her. “And you give one chocolate kiss to each kid in your class. No one has allergies, do they?”

“Jaden can’t have shellfish.” Brianna replied, her eyes glued on the bag of candy.

“Then you’re good! It doesn’t matter that you’re the classroom helper. EVERYONE has to have a chocolate kiss for the spell to work. And then the most important part is that you give Miss Pringle THREE chocolate kisses.”

“It’ll change her back to normal. And you’ll be a hero!”

Brianna WAS a hero that day. What kid wouldn’t be, if they bring candy to school and share it with everyone?!

Obviously, Miss Pringle WASN’T a witch. But thanks to my creativity and brilliance, Brianna was happy to be back in school again. The only one who wasn’t very happy was my mom, when she realized I knew about her chocolate stash.

No one tell her I also know where she keeps the Twizzlers! 🙂

If you could bring a special treat to share with your classmates, what would it be? What’s your fav candy or snack? Share all the delish details in the comments section below!