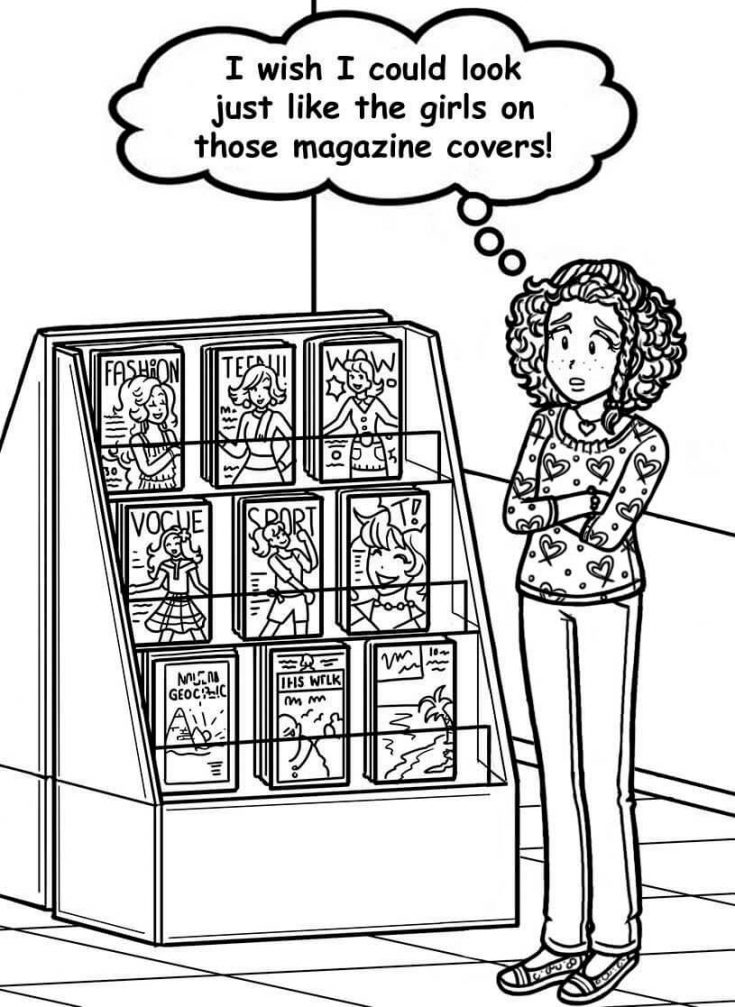 It seems like the only way to fit in is if you have long flowing hair, flawless skin, and stylish clothes, just like all the glam girls do on TV, in magazines, and social media. I don’t have any of those things, and it makes me feel really bad. Should I get a makeover?

Wish I Was Perfect

Hi Wish I Was Perfect,

OMG!! I totally feel this. I wish you could see me now. I have a GIANT zit right on the end of my nose!!! If I were drawing myself in my diary, I FOR SURE wouldn’t include the zit!!! I’m a DORK, not the Wicked Witch of the West!!!

It’s the same on TV, in magazines and social media. Those perfect faces and bodies? None of it is real! The glam girls (and guys too, honestly) you see on screens and magazine covers are so filtered, Photoshopped, airbrushed and digitally altered that you probably wouldn’t even recognize the real person if you passed them on the street!

(If you Google “Photoshopped models,” you’ll see a bunch of before and after shots. They’ll COMPLETELY open your eyes!)

I’m not just talking about zits getting removed. I’m talking about bodies being completely reshaped – stomachs flattened, legs slimmed down, eyes enlarged, cheekbones raised. It’s gotten so extreme that some countries have created laws to regulate it, because it’s a public health issue.

People see these images and believe they need to look the same way, only these bodies are FAKE, which is dangerous! They’re totally messing with our minds. Some girls feel like we should go on strict diets or even STARVE in order to lose unhealthy amounts of weight so that they can look like those models!

So do you need a makeover? Sure. A CONFIDENCE makeover!!! 🙂

I mean, you could spend a bunch of money on fancy clothes, makeup and hair styling. But it’s not going to change anything. You’re still not going to look like models in magazines because you’re a human being, not a fake image. And you’re still going to find things to feel insecure about.

As soon as you have long, flowing hair, super short pixie cuts will be the style. And, even if you DID have perfect hair, skin, and clothes, you might start thinking that your nose is too long, your eyes are too close together, or your feet are too big.

If you think a perfect appearance will make you fit in, take a closer look at the most popular kids at your school. Are they perfect? I guarantee they’re not. (Nobody is!) They’re just kids who have confidence and attractive personalities.

So, remember the truth about the models in those pictures. Usually, they’re just trying to sell you something. Always, they’re trying to make you feel like they have something you don’t.

But YOU have something they don’t! You’re a real human being with a brain, a heart, strengths AND flaws. When you show those things to the world with confidence, another girl who’s wondering if she’s enough will see you and feel better about herself too!

Do pictures of models ever make you feel like you’re not good enough? Have you ever looked at how those pictures are changed to make you think they’re perfect? Any advice for Wish I Was Perfect? Tell us in the comments.