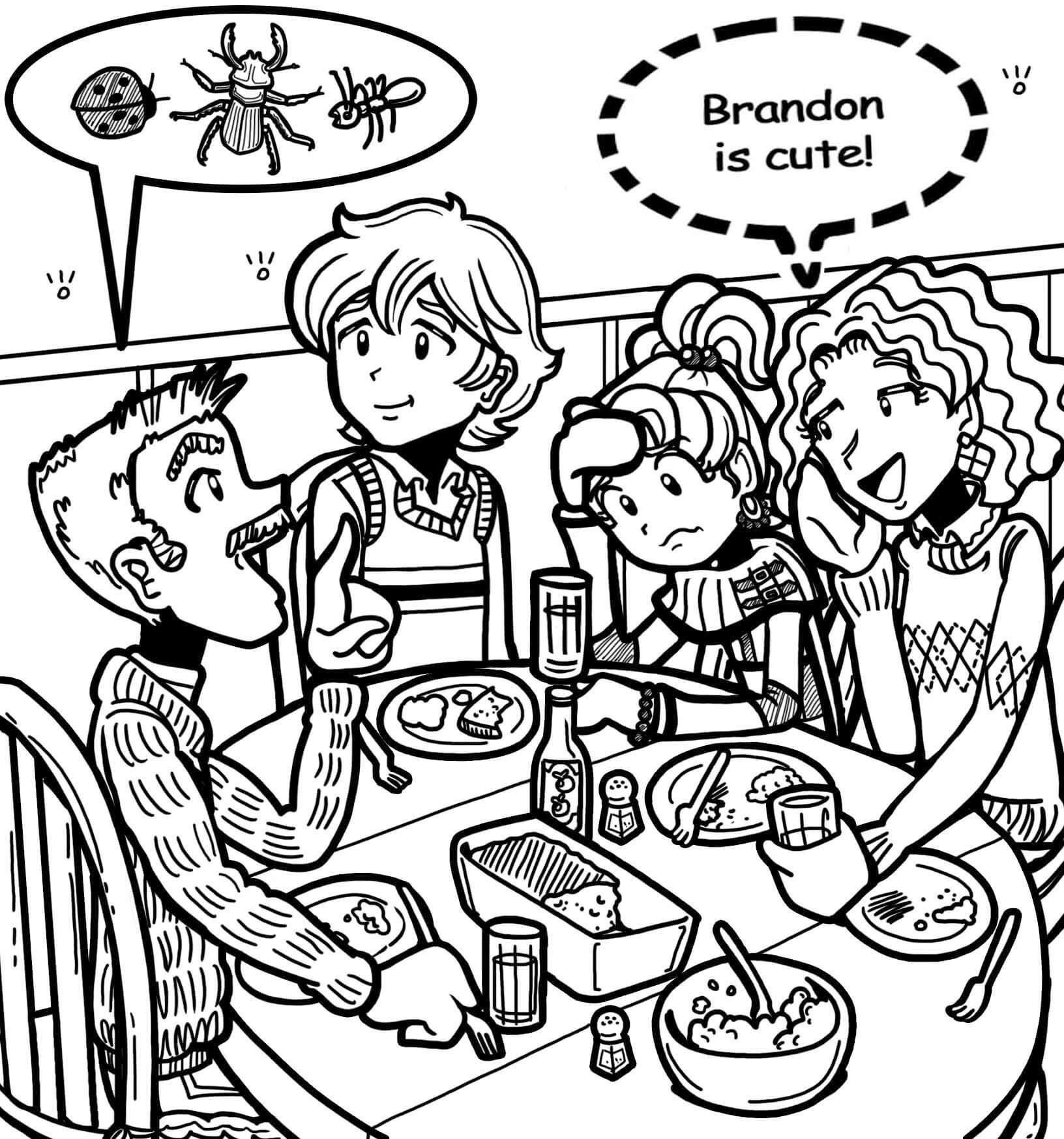 Yesterday, Brandon came over to my house to work on a biology project with me. I was SO excited!! I knew we’d have a good two hours to talk about all kinds of fun things…like DNA, molecules, and osmosis.

That’s the stuff we were SUPPOSED to talk about, but I planned to discuss way cooler things…like fun stuff we could do together during Easter break!

I had it all planned out in my head: we’d order pizza, take it up to my room, and put the “No Brianna” sign on my door. (The one with her head in a circle and a diagonal line going through it!)

Then we’d spend about 15 minutes working on our project before spending the rest of the night giggling, flirting, and, okay, who I am kidding…probably blushing, staring at our feet, and being completely awkward!

Still, awkward blushing with Brandon is better than most things with everyone else!

The fantasy was pretty short-lived, though, because my mom had to go and ruin everything with seven horrible words: “we’d love to have Brandon for dinner!”

First of all, that would take AT LEAST a half hour, and I could think of a million in one better ways to waste ¼ of our time, like cleaning the bathroom toilet or singing “This is the Song That Never Ends” for thirty minutes straight. (Yup, I thought it would be that bad!)

But more importantly, I just knew that if my mom had a chance to talk to Brandon, she’d not only ask him a ton of stuff that’s none of her business, she’d also do something to humiliate me, like pull out pictures of me as a baby, naked in the sink.

When the doorbell rang at 6:00, I jumped down the stairs so fast that I tripped and ended up banging into the door.

So, THAT’S how I greeted Brandon…with a big, loud thud, followed by an awkward “Hi” as I rubbed my aching shoulder. Still, I forgot all about the pain once I saw his cute face!

Within minutes, we were sitting at the kitchen table, where my mom was pretty much staring at him with this super weird look on her face. Every now and then, when he wasn’t looking, she’d try to get my attention and then mouth something creepy about him, like, “He’s cute!” So gross!

After that, my dad bored us with a super long rant about bugs.

Though in his defense, Brandon had said, “Sure, Mr. Maxwell. I’d love to hear about the latest advancements in pest control.” (He’s SUCH a sweet liar!)

Once my dad finished, Brandon told another whopper, saying, “Gee, Mrs. Maxwell, this is the best meatloaf I’ve ever tasted.”

My mom responded, “I’m glad you’re enjoying it! You know, there’s something I’d like to show you.” Then she got up and started moving toward her hope chest, where I know she keeps all her photo albums.

OMG, I was TERRIFIED! I just knew she was going to pull out my baby pictures, and I definitely didn’t want that! The next bit felt like it happened in slow motion. I saw her. I panicked. I lunged. I shouted, “Nooooooo!”

And then I practically slammed the chest shut. Everyone was just staring at me, like I was some kind of crazy woman!

My mom said, “Wow, Nikki, I didn’t know you were so protective of Grandma’s meatloaf recipe.”

My face turned BRIGHT RED, and I said something totally dumb, like, “Oh, well, it’s, like, a Maxwell family secret!”

I thought for sure Brandon was going to think I was some kind of lunatic after that. But when we got to the living room 15 minutes later, he said, “I’m so psyched about Easter break. I really hope we can hang out then!”

Squeeee!! Brandon wants to hang out! I may have bruised my shoulder and embarrassed myself big time, but it was the best night ever!

If you could invite someone really special over to your house, who would it be and why? Tell us in the comments!