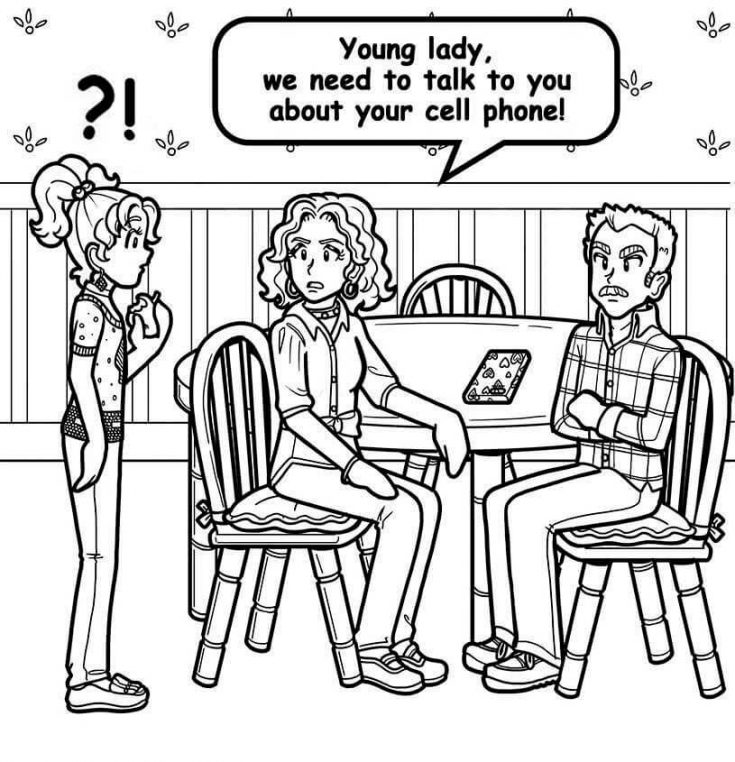 When I came down to breakfast this morning, my parents were BOTH sitting there, looking upset.

I had NOT done anything wrong! I was sure of it! I slumped into a chair, hoping we could get this over with so I could get some breakfast because last night Mom made cheesy meat surprise and the surprise was that it’s SURPRISINGLY DISGUSTING. So, I was starving.

“Don’t lie to us, Nikki J Maxwell,” Mom exclaimed. She was clearly bad cop. “The credit card linked to your phone is for the regular bill and nothing more. And WE pay that bill. Which means we see whatever charges go on it.”

I was frantically trying to put the pieces together in my head. HAD I bought an app on my phone? Maybe without meaning to? I really didn’t think so. But they had the same faces they’d had that time I was in charge of cleaning up the living room before Grandma Maxwell came over, and then while she was here she opened the hall closet and got buried in an avalanche of everything I’d shoved in there.

Dad buried his head in his hands. “Nikki, if you don’t even remember, that’s a sign of a serious spending problem. You’re going to have to get a whole lot more responsible.”

If I insisted I didn’t know what I’d bought, they’d just get madder.

“I promise I’m not trying to make excuses,” I muttered. “I’m just confused and I’m trying to be responsible. It is possible for accounts to get hacked, though. So before I get punished for something, I’d really like to know what I’m being punished for.”

Mom’s face went red. I thought she might explode. But Dad nodded.

“All right, that’s fair,” he said, pulling out what looked like a credit card statement. “Does any of this ring a bell? Glamify Makeover app, bonus points in the game, Sugar Bomb, a year-long membership in Teen Datez. With a Z. And extra dog treats in the Puppy Palace game!”

That’s when I KNEW something was up. Because I had been desperately wanting those extra dog treats to get to the next level in Puppy Palace, but I wasn’t allowed to make in-app purchases!

They would just get mad if I tried to make excuses, though. Because I had to admit: it looked bad. But I thought I had a decent idea what had happened.

“Nikki,” Mom huffed. “You can’t blame this one on Brianna. This is your phone and you are responsible for these charges.”

“Hey Brianna! Remind me, how do you get the golden bone in Puppy Palace?” I asked her.

“Oh! Once you buy the extra dog treats, it’s easy! You just tug on the silver leash and they appear!”

I turned to look at my parents. Mom’s eyes had narrowed at Brianna. Dad hadn’t caught up yet.

“And how are you doing on Sugar Bomb?” I asked suspiciously.

“It took me forever to get to the top of Rock Candy Mountain, but with the extra…”

Brianna caught up to what was happening right before Dad did. Her eyes went wide and her mouth snapped shut.

“Brianna,” Dad questioned her. “Have you been making purchases on Nikki’s phone?”

“Forget the purchases! What are you doing even touching my phone?! And how did you get in?! It’s got a password!” I fumed.

Brianna looked nervous and started squirming. Then she finally admitted, “I thought it was a game! I didn’t know it would be for dates with real boys! EWWW!!!”

And THAT is how I realized I needed to change the password on my phone! (And also how I got the golden bone in Puppy Palace!!!)

What are your favorite online games to play? Tell us in the comments below!