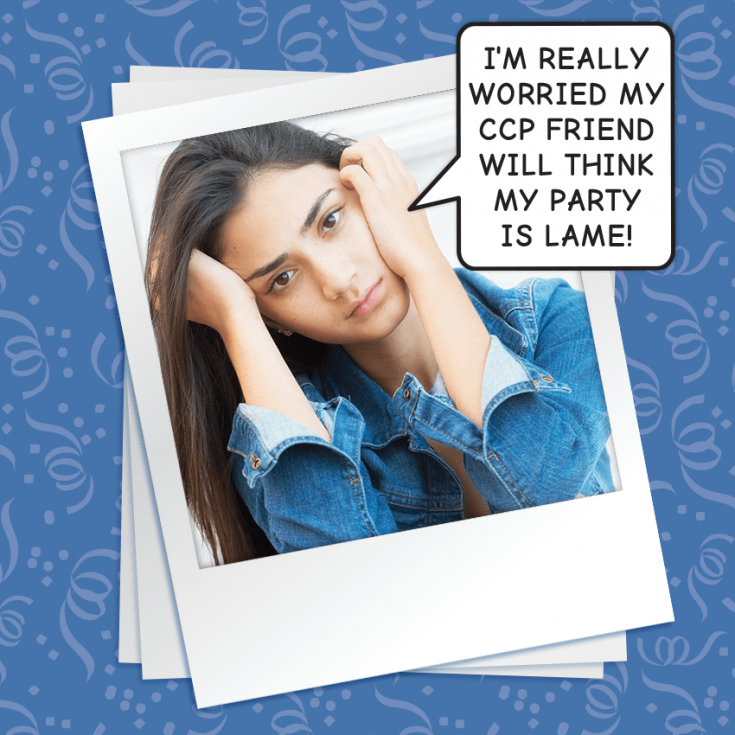 I have a super important question! What would a really mature, cool girl want to do at a party?! Usually my parties are just me and my kooky BFFs, who are super fun and will happily do anything at a birthday bash. But, this year I have a new friend who’s a CCP. I’m worried that she’ll think my party is BABYISH! After all, she’s been to tons of SUPERCOOL sleepovers without me and will probably expect something as glam as they were. How should I plan my b-day?! It’s gotta be LIT! Any ideas?!

Okay, look. I don’t know anything about glam sleepovers. The last sleepover I had just included me and my friend Max Crumbly playing video games until we passed out on the couch.

Your kooky BFFs sound AWESOME. And it’s also awesome that you’ve got a new friend. But what’s NOT awesome is changing your whole party around because of what you think this one new friend is going to want. It’s YOUR party, not hers!

First of all, you’d probably be surprised how she’ll react to your style of kooky fun. Just because she seems mature, sophisticated or whatever doesn’t mean she doesn’t like to have goofy fun. Her CCP status might actually mean she doesn’t often get the chance for goofy fun, because people expect her to be a certain way. So, for all we know, she might be super into it whatever you and your BFFs would normally do.

And even if she wants, like, manicures on a yacht, it’s not for her. If she really IS your friend, she’ll want you to have a party that suits YOUR sense of fun. If she thinks something is babyish, well…SO WHAT. If that’s her first reaction to your party, you and your BFFs should carry on without worrying about it. Then she’ll probably see how much fun you’re having and want to join in.

Basically, it comes down to this: Don’t change who you are and what you think is fun or cool because of what someone else might think. ESPECIALLY when that person is a friend who should accept you no matter what you’re into.

So, I say embrace the kooky. And happy birthday, by the way. 🙂

Let’s ask our readers about this one. Do you change how you act around certain friends? And what are your favorite birthday party ideas? Tell us in the comments!