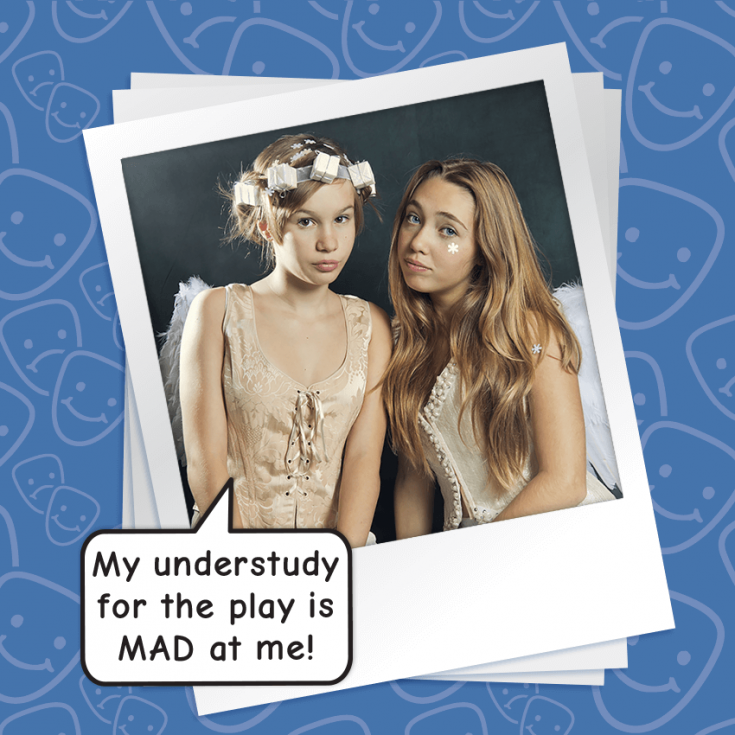 I got the main role in our school’s fall play, which is exciting! But, my understudy is being mean to me because she didn’t get the role. I feel sorry for her, but I also worked really hard to get the part and she’s being super annoying. WHAT DO I DO?!?!?!

Well first of all, congratulations on getting the main role! That’s a big deal. I hope the understudy’s jealousy isn’t stopping you from feeling proud about that.

Jealousy is really tough, whether you’re feeling jealous, or somebody’s feeling jealous of you. And I bet it happens a lot when everyone wants the leading role in a play. It happens in other activities too, like sports, spelling bees or WHATEVER. Even things like friendship and crushes. There’s so much competition, all around us!

It’s pretty tricky when you’re the one who got the part. You’re proud of yourself and you should be. But you also don’t want to act like you’re better than anyone and make anyone feel envious. I think the best thing you can do in general (we’ll get to the mean girl in a second) is try to be humble and a good team player with the whole cast. Compliment other people on their work, offer to run lines with people, and stuff like that. And work hard. Show everyone that you deserve the part because of how hard you’re willing to work.

Now, let’s talk about the understudy. Nothing excuses her being mean, but I will say that being an understudy seems like a really hard job. Because you have to do ALL of the work of the lead actor but you might not even get to perform and show everyone how hard you worked. (The upside of being an understudy is that you get a chance to learn a lot and prove yourself to the director. If you DO get to perform, you’ll be saving the day! But if you don’t, hopefully the director will remember your work the next time and you’ll get to perform an important part then.)

So, just like humility is important, it’s also good to understand what the understudy is going through. Maybe there are ways you can make her feel like you’re partners in the role, like running lines together or working on choreography together.

But, if she’s not responding to your kindness and all into the “haterade,” it sounds like that might be her problem. If it’s a serious problem that’s distracting you, you could talk to the director. But if it’s just annoying, do your best to focus on giving the best performance you can and try to ignore the understudy’s issues.