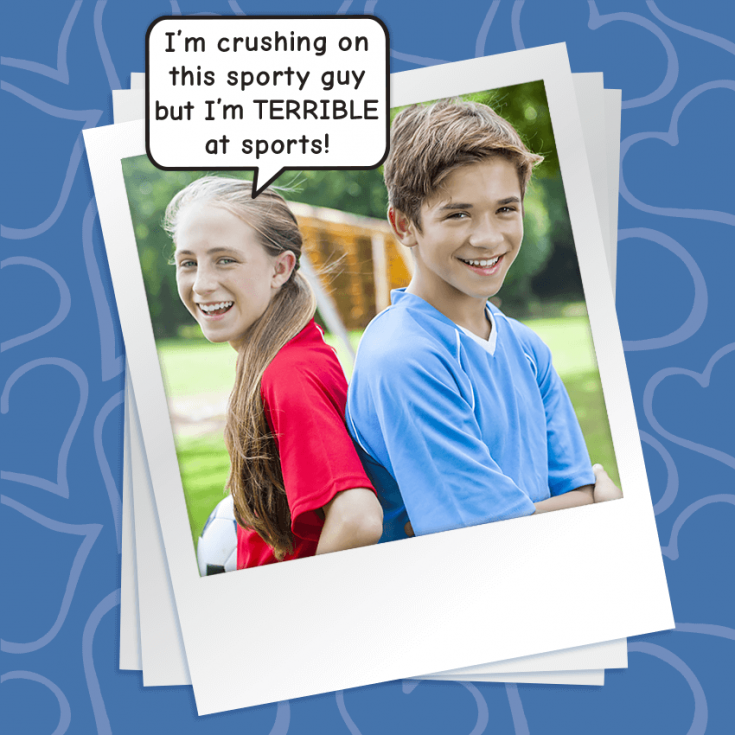 HELP!!! I have a crush on a super cute STAR athlete. I have P.E with him, but the problem is… I’m TERRIBLE at sports! While he’s competing nationally, I’m losing in every game, race, and activity! We never talk, and all he really knows about me is I’m a major failure. I’ve tried to get over him, but I can’t stop thinking about him! They say opposites attract, but is it really true in my case?

Tales From A Not-So-Wannabe Sports Star

Okay, first of all, I think we need to talk about how you see yourself. Just because sports aren’t your thing doesn’t mean you’re a “major failure.” I mean, come on, I’m insulted! Because I’m definitely not an awesome athlete…does that make me a major failure too? Just sayin’.

I’m sure there are things you’re good at. Maybe it’s art, cooking, science or making people laugh. When someone else isn’t so good at those things, do you think they’re a major failure? I’m guessing no. Most of us tend to be the hardest on ourselves. So do me a favor and be a little easier on yourself, okay? You’re NOT a major failure. You’re AWESOME! ☺

If we can agree that you’re great and being blah at sports has nothing to do with whether you’re successful or not, let’s move on to this star athlete guy. If he’s competing nationally, then probably NOBODY in your school PE class is anywhere near as good as he is. So you’re not alone. And it probably means he doesn’t judge his classmate’s sporting abilities at all. Like, would a star soccer athlete like Megan Rapinoe show up at a kids’ soccer game and judge the kindergarteners kicking the ball into the wrong goal?

It’s possible he’s only interested in sporty girls. It’s also possible he gets enough of sports in all his activities and he really enjoys hanging out with people who have nothing to do with sports and give him a break from that world. Sometimes opposites attract. And sometimes people share the same interests. Crushes tend to be totally unpredictable, I’m afraid.

Honestly, I don’t think it matters that you can’t do sports. For all we know, he might still like you if he got to know you. But I wonder—if his whole world is sports, what exactly do YOU like about him?

If you really want to know him, you should go talk to him. If you’re genuinely interested in his world of sports, you could ask him about his latest competition. Or if you actually want to get better at sports, you could ask him for some tips. But DON’T do either of these things if you’re not really interested. Changing who you are to get a crush’s attention is NOT the way to go.

But I guarantee sports isn’t the only thing that interests him. Maybe you could talk about a book or TV show you’re both into. Or, maybe he might need friendship advice or help with the math homework. Try to figure out something you could help him with that you’re good at.

If none of these things work out, getting over him might be the best way to go, and we have whole advice columns about that. The main advice is to keep busy and distracted, and cut out unnecessary reminders of him, like following him on social media. That might be trickier than the average crush, since it sounds like he gets a lot of attention for his accomplishments, but you can do it.

Do you believe opposites attract? Or are you more likely to crush on someone who shares your interests? Tell us in the comments!