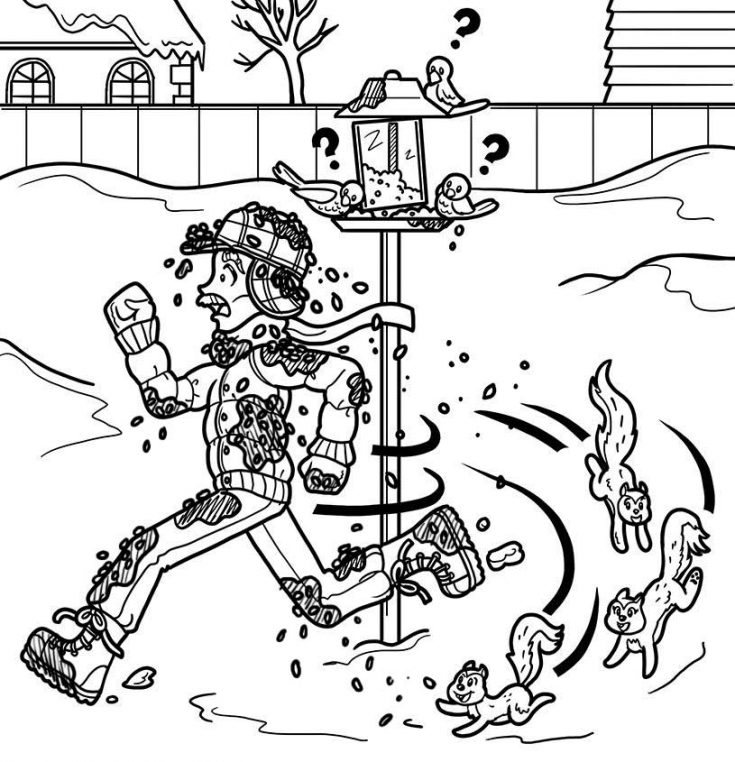 NOTE TO SELF: Next year, get Mom a pretty candle for Christmas!!!

This is what I’ve always gotten before. Well, not always a candle. But a candle, or a nice-smelling bottle of hand lotion. Or a mug. These are really boring gifts, but in my defense, she never asks for anything! And she’s always happy with whatever!

But this year, she’s been getting all into birds. Going on nature walks and reading bird guides. So Dad and I worked together on her gift. He got me supplies and I made a bunch of different DIY birdfeeders. I even let Brianna paint a couple of them. Dad bought some big bags of birdseed to go with them.

Mom TOTALLY freaked out. You’d think we had given her a shiny new car for Christmas! I’d never seen her so excited about a present!!!

So she set up all the birdfeeders near windows, and waited for them to come. And they did! But so did THE SQUIRRELS.

Brianna and I thought the squirrels were hilarious, honestly. They would dash up skinny poles and balance on tiny little ledges meant for birds. They would tip feeders over and spill the birdseed all over the ground. One even figured out how to climb up on the roof and then hang over the edge to reach a hanging feeder.

Mom was NOT amused. So she did all this research and started adding all these gadgets to keep the squirrels away from the feeders. She rubbed cooking oil all over the poles, so they’d slip down. She even installed a thing that made a high-pitched sound the squirrels don’t like to keep them away.

Only none of these things worked!

“How are they doing it?!” Mom would cry, running around the yard, trying to squrirel-proof everything. “Are they working together?!!”

She even stayed up all night, sitting at the window, watching her birdfeeders with this sleep-deprived zombie look on her face.

“I think all the squirrels are PLOTTING AGAINST ME,” She whispered in this very low, weird voice. She was really starting to FREAK ME OUT.

I was starting to worry about my mom!!! It wasn’t about feeding the birds anymore! It was 100% about defeating the squirrels!

That’s when Dad got an idea. “I’m gonna TAKE OUT THOSE SQUIRRELS and get the feeders back for those birds!” He pulled on his snow boots and coat. “I think we’re gonna need some more cooking oil to keep those pesky squirrels off of the feeders.”

UH OH. Whenever Dad gets one of his WACKY ideas, it just DOESN’T end well.

As Dad carried the cooking oil out towards the birdfeeders, I could see that he was headed straight towards a big patch of ICE on the ground.

But it was TOO LATE! Dad slipped on the ice and went hurtling through the air. The cooking oil spilled out of the bottle and splattered all over him!

When he tried to get up, regain his balance and almost fell over again, he grabbed hold of the poll that held up a birdfeeder and ended up tipping the feeder over. Birdseed went everywhere, and it stuck all over him due to the cooking oil.

It looked like Dad had gotten into a fight with the birdfeeder! And lost!!

Then guess what?! The squirrels immediately stopped chowing down on the birdfeeders and went charging after Dad instead!

“AAAAAAHHHH!!” Dad screamed as they chased him all around the backyard.

So, the good news is that the squirrels were no longer attacking Mom’s birdfeeders. It looked like Dad’s plan WORKED! 😀

The BAD NEWS is that now they were attacking HIM!! 🙁

But, there’s some more good news! Dad inspired us to build a snowman covered in cooking oil and birdseed to distract the squirrels from going to the birdfeeders.

Now the birds have their birdfeeders back, and the squirrels are hanging out with Frosty The Snowman! 😀

During the winter, Mom just LOVES putting out birdfeeders and watching all sorts of different birds flock to them. How about you? What’s your fav thing to do in the winter? Tell us all about it in the comments below!