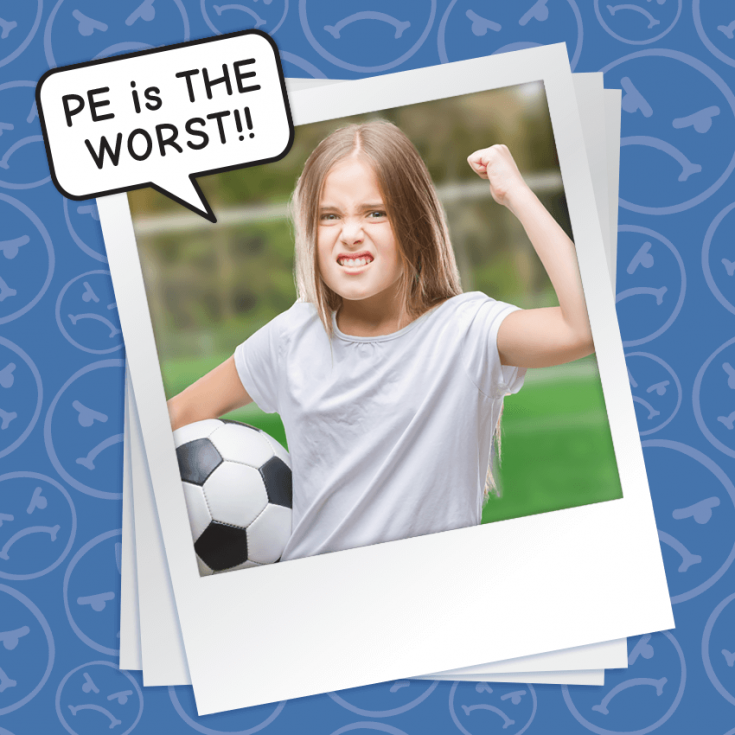 Please help me! At my school, teams in P.E. are SO unfair. All the sporty kids are picked for the same team, and then they DESTROY the rest of us. If I do end up on the same team as the sporty kids, they yell at me for not being good enough!!! I do Taekwondo and I’m a black belt, but I don’t think of myself as very athletic. What should I do?

Ugh, PE is like the WORST. Forming teams, changing in dingy locker rooms, and not feeling very athletic compared to everyone else…it’s like one hour of pure TORTURE, huh?

It seems like it should be fun, but it’s NOT. At least, IMO (in my opinion). But then I’m not very athletic either.

Which means I have definitely been crushed by all-star teams AND yelled at for letting the athletic kids down. It’s frustrating because it seems like PE should be fun. It should be a chance to get up, move, and play games. Which are FUN, right? But I don’t know if you’ve ever tried saying, “It’s just a game” to someone who’s super competitive. It does NOT go over well.

Try to focus on the positives. Do you have friends in your PE class? If so, then try to enjoy hanging out with them. Well, at least you’re outside and not doing math (or whatever your least favorite class may be. Besides PE, of course. ☺) Try to be positive and laugh it off when you mess up. Some people might not get that it’s just a game, but you do.

You could also try asking the athletic kids for pointers. People like to show off what they’re good at. If you ask for help, they’ll see that you’re making an effort and appreciate that.

You could also talk to your teacher about trying some new activities. If you’re always playing soccer, baseball or basketball, that plays right into the strengths of the sporty kids who’ve been playing those games since preschool. But maybe you could help lead a Taekwondo unit! Dance, gymnastics, or yoga are other unique options that include kids with different types of skills and interests. Hey, it can’t hurt to try!

No matter what, you’re not alone. A lot of kids struggle in PE. But don’t let that discourage you from getting a good workout. I mean, if you’re a black belt in Taekwondo, then you probably know this. Physical activity really helps relieve anxiety and helps you get a good night’s sleep.

Are you a competitive athlete in PE, or are you afraid of the ball? How do you get exercise, in or out of school? Tell us in the comments!