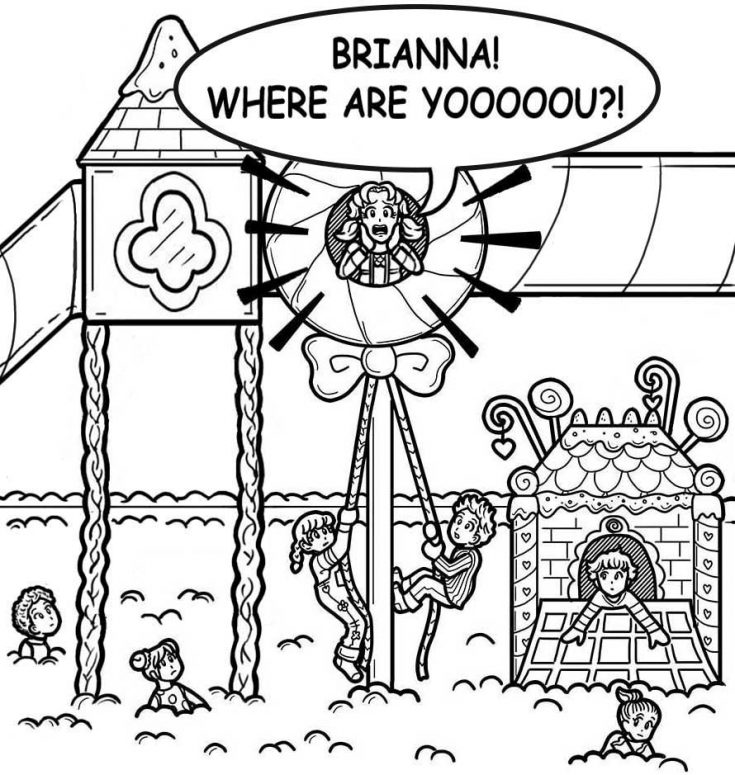 I thought losing Daisy in the park was bad. Well, it’s nothing compared to LOSING BRIANNA!

I usually don’t complain whenever Mom tells me to watch Brianna while we’re at the mall. Not much, anyway. It just means chillaxing at Kandy Kindgom Play Land on a peppermint-shaped bench, and writing in my diary while Brianna goes bananas in the ball pit.

Okay, okay. So, that doesn’t really count as “watching” her. But whatever. She’s just over there in the ball pit, right?

It was getting near the time when we were supposed to meet Mom, so I closed my diary and scanned the ball pit for Brianna. But I couldn’t find her. “Brianna, where are you?” I nervously called. “It’s time to go! Didn’t I tell you to stay where I can see you at all times?!”

Uh oh. This is BAD. I quickly climbed into the ball pit to search for her. If I showed up without her, Mom would TOTALLY FREAK!

I needed a better way to see all over Kandy Kindgom, so I climbed up a licorice rope ladder to the highest lollypop tower in the play land. “BRIANNA!” I bellowed as loud as I could. “WHERE ARE YOOOOU?!”

Right then, I group of rowdy little kids came scrambling up the rope ladder from behind me. They were coming at me so fast that I tripped, headfirst, down a tunnel slide that I was WAY too big for, so ended up STUCK right in the middle of it!

“Um, hello up there! Could you please grab my feet and pull me out?” I begged those kids as calmly as I could so I didn’t sound like I was about to lose it.

“Hey! I think she’s trapped inside the tunnel slide,” I heard a little girl tell the others.

“Yeah! Let’s force her out by piling in together!” An older boy added.

But it was too late. All I could hear was laughter and clamor. Suddenly, I felt a bunch of them pushing against me so hard that I went hurtling down the tunnel slide at top speed! Then it all went BLACK.

All I recall after that was lying in the ball pit face down with those NUTSO munchkins piled on top of me. I could barely breathe!

Um, NO. I don’t think so. I might end up breaking something! Besides, I still needed to FIND BRIANNA! She obviously wasn’t at Kandy Kingdom anymore, so I had to figure out where else she could have gone.

That’s it. The candy store!

Still achy from the tunnel slide fiasco, I rush-limped over to Andy’s Candies and found the store clerk. “Excuse me,” I sputtered, “but have you seen a six-year-old girl in pig tails, blue jeans, and a pink Baby Unicorn jacket?”

The store clerk got an attitude and rolled his eyes at me. “Yes, I have! She just got through pigging out on so much candy that she hightailed it to the bathroom. Her face looked like she was gonna blow!”

“Aaarrrghh, Brianna!” I grumbled as I dashed out of the candy store towards the nearest bathroom.

“That’s what happens whenever kids come in here UNSUPERVISED!” He yelled at me from behind.

I busted through the women’s restroom door to find that the little girl he described was NOT Brianna.  But, he was definitely right about her having a miserable time with the candy!

Fortunately, her mom caught up with her and helped her out.

Speaking of her mom, my cell phone rang, and it was MY mom. But, I was too scared to answer. I had to find Brianna! QUICK!!

Sorry, but I’m gonna have to write the rest of this later, you guys! TO BE CONTINUED!! ☹!!

Where do you think Brianna could have gone?! Tell me your predictions in the comments so that I can figure out where to find her!