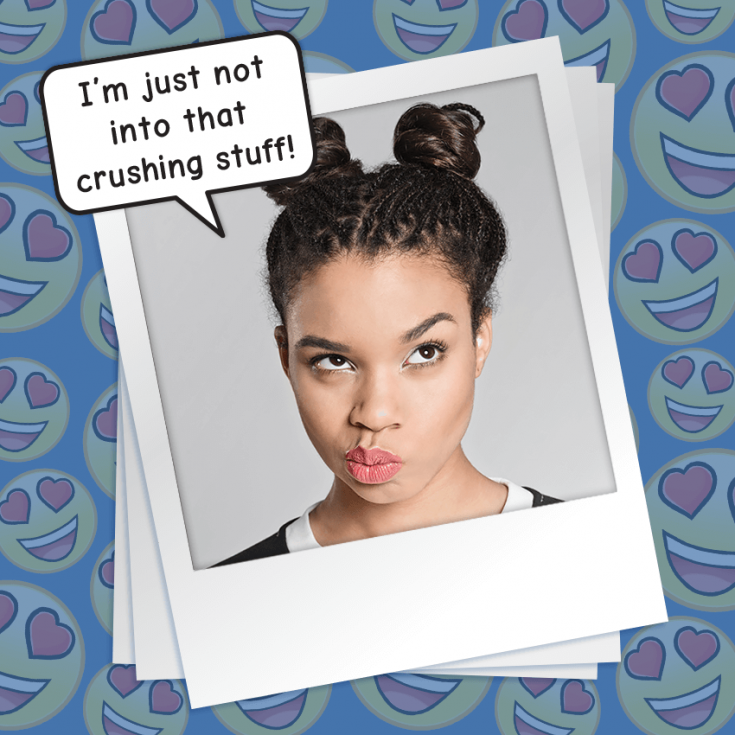 All of my friends have crushes except me. Sometimes I wonder if something’s wrong with me. The other thing is, I don’t really consider any of the guys at our school crush worthy. What should I do?

What’s Up Cruddy Case Of Crush-o-phobia,

It sounds like you have high standards. You know what you’d like in a crush. And that’s good. Because you know what? Having a crush is stressful. I mean, don’t get me wrong. It’s also a lot of fun. But there are a LOT of crazy feelings involved in having a crush. That person should be WORTH the energy you put into thinking about them.

If there’s no one at school or anywhere else who is worth that right now, it’s not something to stress out about. Honestly, that just means more time and energy for your own thing. Believe me, there will be PLENTY of time for crushes.

You might feel left out, though. I can totally get that. If your friends spend a lot of time talking about their crushes and you can’t relate, that might feel awkward. But I think you can listen, support them and get excited when things happen for them, even if it’s not happening for you. And hopefully they support you and celebrate you when it comes to your non-crush stuff.

You might also consider the fact that some of your friends are probably more into their crushes than others. Since you feel pressure to have a crush, others probably do too. So I’m not saying they’re lying, but I’m almost positive some of them have claimed a crush because they think they’re supposed to and not because of fluttery feelings and sweaty palms whenever that person is around.

So, my point is that you’re not alone. You’re just being true to yourself. I think that’s awesome!

Hey readers, are you crushing on somebody right now, or are you crush-free like Cruddy Case Of Crush-o-phobia? What do you think makes a good crush? Tell us in the comments.