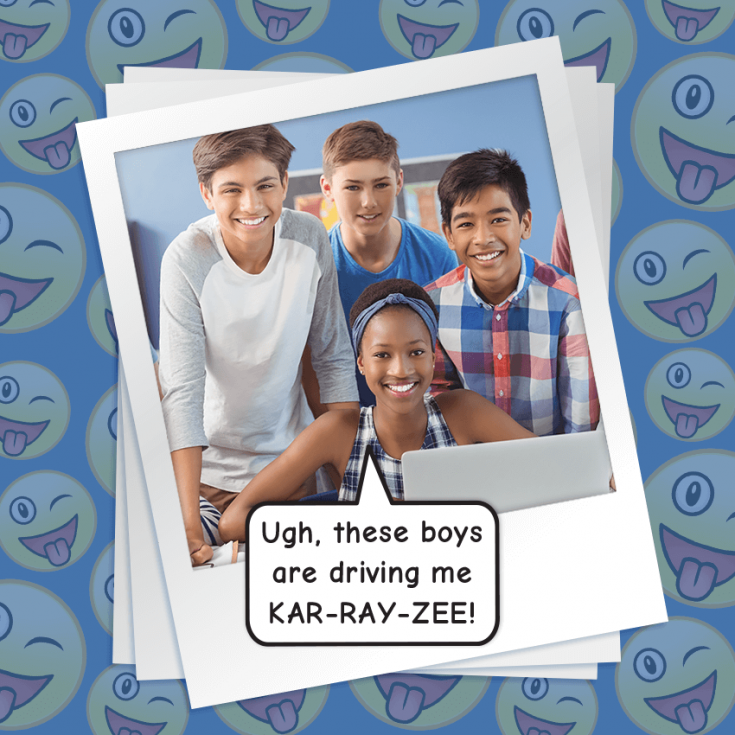 All the guys I know act like weirdoes when I talk to them! WHY?!?! They never make eye contact, they tell their friends to ask me questions and never reply when I ask them simple stuff! It ends up making me feel bad because they don’t like me at all. Please help!

What’s Up Bothered By Boys,

Okay, listen up: You are NOT the problem here. I promise. It’s not that they don’t like you.

It’s just…an awkward stage we go through. And I have to say this up front: I’m going to make generalizations about how boys act and how girls act, because you’re asking about boys in general. But obviously there are boys and girls who act differently from the way I’ll describe them.

You’ve probably heard people say that girls mature faster than boys. There are sciencey brain-development reasons people say that, but also it can be an excuse to let boys off the hook for acting dumb and immature longer. If everyone expects boys to act dumb and immature longer, there are no consequences for that behavior, so they keep doing it, and everyone says that’s just how boys are and the cycle continues.

But girls are expected to be polite and communicate and mature earlier, so they do. Because if they don’t, they WILL have consequences.

Anyway, boys aren’t expected to have the same social skills as girls so usually they don’t. Add hormones into the mix and YIKES.

When boys start to realize girls are GIRLS, it all goes haywire.

PLUS there’s all this weird extra pressure once hormones start kicking. Talking to ANY girl means something different than it used to, and people will assume they have a crush. Which results in total awkwardness. (To be fair, I think this happens with girls, too.)

So, um…what can you do? I mean, I think the only thing you can really do is not let it get to you. It’s not about you. If these guys are your friends and you want them to stay your friends, just shrug off their awkwardness and keep being a great friend. Eventually they’ll realize how awesome you are that they can survive talking to a girl, and things will go back to how they were before.

I hope. To be totally honest, I’m still a super weird, awkward boy myself

Are the boys you know total weirdoes? How do you talk to them? Tell us about it in the comments.