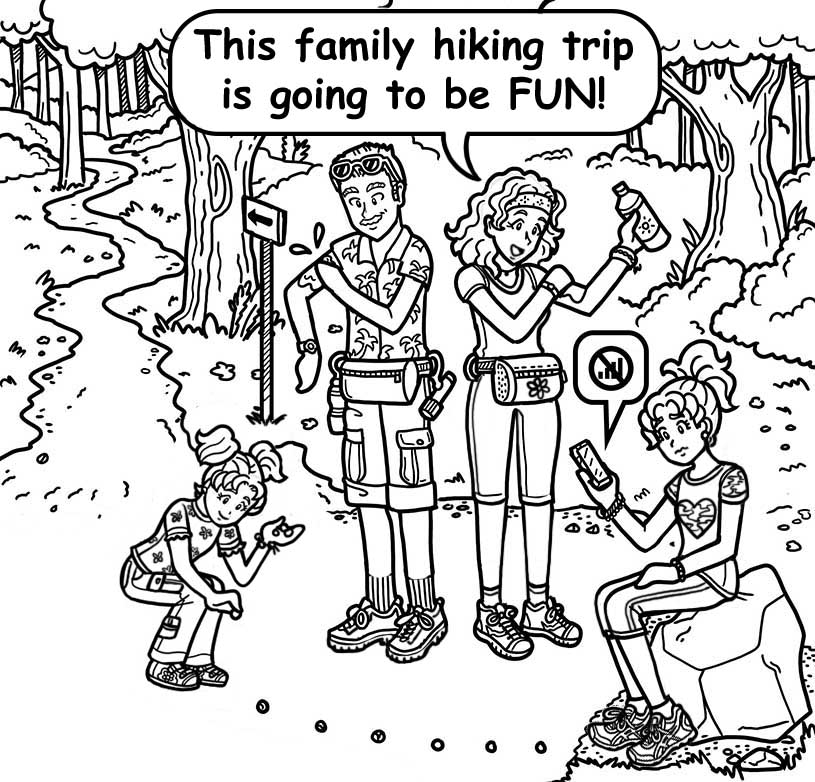 Today I made the number one mistake any kid can ever make in the middle of summer. I knew better. I did it anyway. And right in front of my mom!!! I know, I should be ashamed of myself. I am! Here’s what I did:

As soon as the words left my mouth, I realized what I’d done. If I didn’t take those words back right away, my mom was going to suggest I clean out the garage, scrub the toilets or go help Mrs. Wallabanger clip her toenails!

I did NOT expect what she actually said. “Let’s go on a hiking trip!”

A hiking trip?! We are NOT a hiking family. I had no idea where this came from. But Brianna got all excited and Dad went to grab some camping gear. The next thing I knew, we were all in the car driving to some park that Mom said had great trails!

Apparently she’s been reading blogs about hiking! I guess she was bored too.

So we got there and before Mom and Dad made it out of the car, Brianna was running towards the forest. Not on the clearly marked path, of course!

Mom motioned for ME to run after her, because she was too busy fastening on her fanny pack full of sunscreen, bug repellant and who knows what else.

I dragged Brianna back and we set off on the path together. Here we were, swatting away bugs for fun. I was bored sitting at home, but now I was bored walking through trees and getting eaten alive by musquitos. Oh, and there was also no bathroom WHATSOEVER!

Also? No phone service. This was the WORST. TRIP. EVER ☹!!

I got so bored I started paying attention to what Brianna was actually doing! I can usually count on her to be doing something TOTALLY weird. And she WAS!

She was wearing these cargo pants with a million different pockets. Every few minutes, she’d reach into one of the pockets, pull out something bright and glittery, and drop it on the ground.

I stopped to see what she was dropping. They were those chunky plastic beads from jewelry-making kits for little kids.

“Brianna, what are you doing? You can’t litter in the forest! An animal could try to eat those and choke or something.”

“No, silly!” Brianna giggled. “An animal would eat BREADCRUMBS. That’s why I’m using beads instead.”

Beads instead of breadcrumbs? BREADCRUMBS. She was leaving a trail to find our way back! Like Hansel and Gretel!

Guess where we were ten minutes later? LOST.

Right after telling Brianna how well-marked the trail was, Dad decided we should go off the main trail and explore “the road less-traveled.” Then Dad and Mom both started reciting some old poem that’s apparently about someone who thinks it’s fun to get lost in the woods and eaten by bears.

I checked for phone service again. Nothing! We were definitely going to die out here!!

Mom laughed nervously. “I guess we shouldn’t have told Brianna to stop dropping those beads!”

Brianna popped out of a hollow tree she’d been exploring. “I never stopped dropping those beads! I knew this would happen. Follow me, you guys!”

So that’s how Brianna saved our lives, leading us from glittery bead to glittery bead and all the way back to our car. As soon as we reached civilization (which, okay, was about five minutes from the park), we stopped to use an actual bathroom and get ice cream 🙂 !!

I have learned my lesson. The next time I’m bored? I’ll keep it to myself!!!

What kind of adventures have you been on outside? Tell us all about it in the comments!