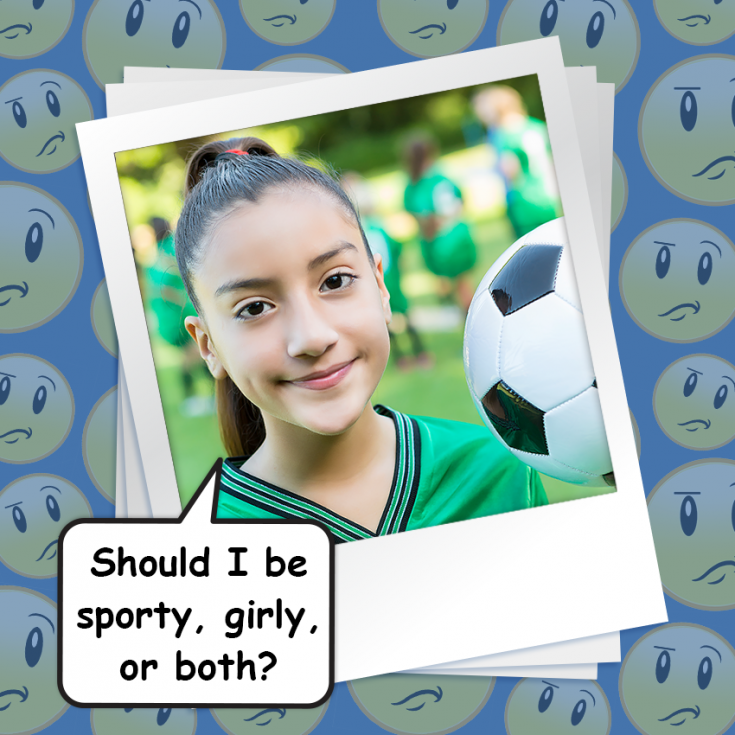 Okay, here’s my issue—I love playing basketball and soccer, and I’m pretty good at both. I want to try out for my school’s teams this year… but my cousin says that if I keep playing sports and if I dress too “sporty” instead of “girly,” boys won’t like me. What should I do?

Being great at sports is awesome! In fact, working hard at ANYTHING is awesome. Want an example? My personal passion is taking photos for the school paper—even though it’s not being a quarterback on the football team, I still think it’s pretty cool. There was a time when I felt kind of self-conscious about it because other boys were really focused on sports… but seeing my hard work pay off and having friends like Nikki taught me that being on the newspaper staff is cool, too. 😊

Sometimes people put boys and girls in boxes—literally. Have you ever been to a fast food drive-thru for a Happy Meal box and have them ask, “Do you want the girl toy or the boy toy with those chicken nuggets?”

Whenever that happens, my grandma just sighs and says, “Honey, just pick the best toy! And throw in some extra fries!” Then she reminds me that she loves me, and that whether I get a robot, unicorn or a monster, getting any toy with lunch is pretty darn cool. AND THEN she asks if she can have half of my fries.

Um, okay, that was a crazy fast-food-way of saying that I don’t think you have to choose between being sporty or girly. I think you can be both. I think that every person can be more than one thing—like my friend Nikki (or like Serena Williams, who’s a world-champion tennis player that also owns a fashion line).

Okay, so Nikki’s not so great at most sports and she’s not as fashion-crazy as MacKenzie, but she’s artsy, musical and funny. And good with animals. And she’s a really great friend. And she’s got cute eyes. And a cute laugh. And this one time, her hair smelled really great when we bumped into each other in the library and—okay, wait a minute, I’m getting off-track.

The bottom line is that I think all of us can be more than one thing. I also think we don’t need to put serious definitions on things like “sporty” and “girly.”

I asked my grandma about your question and the first thing she said was:

I just shrugged and responded, “Um… something that a girl does?”

Grandma had that look on her face that told me I’d better say yes to everything she said. Which I did. Because Grandma is pretty smart.

Anyway, back to your question: should you be sporty or girly?

My answer is: Don’t worry about whether or not anybody likes you. Be nice, be awesome, and BE YOU! Forget whatever labels people put on you. Create your own label, full of ALL of the things that make your heart happy.

Plus, the right guy will like you for who you are. So, as my friend Nikki would say, “Remember to always let your inner dork shine through!”

Have you ever felt like you have to choose between interests in order to please people—whether it’s sports, photography or writing? What did you do about it? Tell us in the comments!